ROME, Italy (June 8, 2019) - Two weeks ago, Croatia’s Matea Jelic was in the Manchester Area, competing at the World Taekwondo Championships. After progressing through the opening rounds, she came up against Brazil’s Milena Tittoneli in the round of 16 and lost narrowly by one point.

The defeat was a great disappointment but rather than let it get her down, Jelic used it as motivation.

When stepping into the Foro Italico Arena here in Rome for the first World Taekwondo Grand Prix of 2019 it was her desire to redeem herself which drove her. She faced Korea’s Jan-Di Kim and after the first two rounds she had not managed to register a point. With just ten seconds of the match remaining, Kim looked set to consign Jelic to a silver medal. But Jelic fought to the very last second and landed a spinning back kick followed by a front kick to win the match 8-3.

“The fight is not over until it is done and the referee says so.” Jelic said less than 24 hours after her gold medal victory. “You can lose everything in one second. Never give up. Just keep trying. I feel amazing because two weeks ago I lost at the World Championships. So I can say I didn’t give up and now I look forward to future matches.”

Jelic’s never give up attitude is part of what makes taekwondo such an exciting sport to watch as a whole match can turn around in a matter of seconds. But you have to have self-belief if you are going to fight until the end.

“I think what was missing at the World Championships was my self-belief. Here I trust myself and my coach and the people around me.”

Her ambition is driven by her desire to always improve. This desire has seen her move away from her friends and family to the Croatian city of Split where she has the best environment to train. She trains virtually all day, with training split into two or three sessions. When she’s not training, she is resting or visiting her family and friends. It is improvement that motivates her.

“I don’t really think about medals I just want to be better and better. The challenge is to always be better and compete with other people.

“I was in taekwondo since I was a kid. From the start it wasn’t so serious but later I wanted to do more and more. I was watching Grand Prixs on my laptop and was hoping to get here. Now I’m here I’m very grateful and happy.”

“But I I want to put dreams in front of me so I can try to reach them. So maybe my next dream is to go to an Olympic Games and win a medal.”

To get to Tokyo 2020 will not be easy and Jelic recognises that she is going to have to beat a lot of good fighters to qualify.

“Everyone wants to go to there. Everyone is trying. There are many great players in -67kg. I can never relax. But they bring out the best in me.”

She will need to be at her best on the mat but to compete and overcome her opponents but part of what makes taekwondo special and separates it from other sports is the respect fighters have for each other. This is something that Jelic is particularly drawn to. 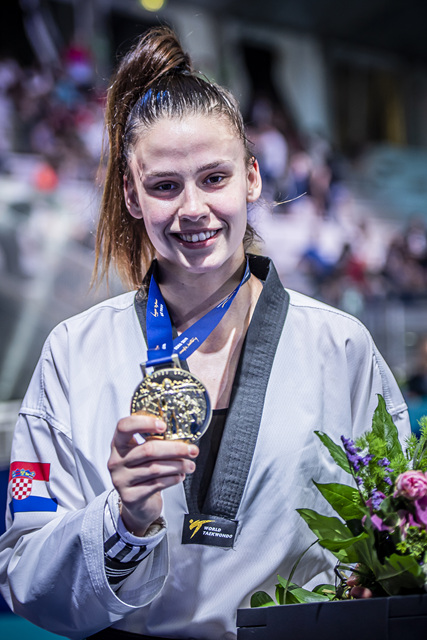