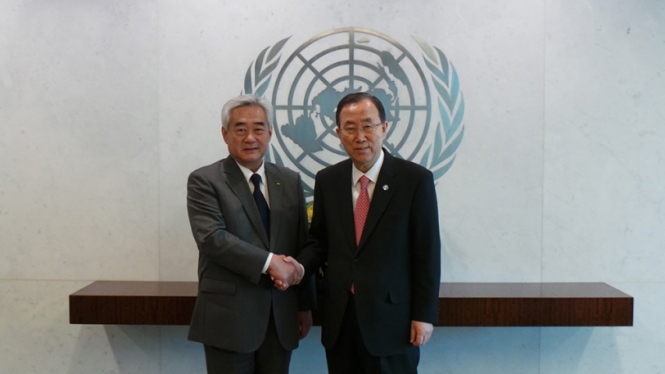 The U.N. Secretary General is only the third recipient of an honorary 10th Dan black belt after the late former president of the International Olympic Committee Juan Antonio Samaranch and current IOC President Jacques Rogge.

The symbolic event took place one day before the opening of the 3rd International Forum on Sport for Peace and Development at the U.N. headquarters in New York. The two-day forum, jointly organized by the United Nations and the IOC, drew IOC President Rogge, U.N. Secretary General Ban and WTF President Choue.
The WTF's global campaign to promote the values of Olympism continues this summer through the hugely successful World Taekwondo Peace Corps program.

Students from the Peace Corps will be dispatched to 22 different countries, such as East Timor, Colombia and Botswana to teach taekwondo's core skills and values to young, aspiring athletes. Since the program was inaugurated in 2008, it has visited 93 different countries across all five continents.
WTF President Choue said:

"I am delighted to have presented U.N. Secretary-General Ban Ki-moon with our prestigious black belt. The black belt is a globally recognized symbol of expertise across the martial arts and awarding it to the Secretary General represents how strongly matched the WTF's values are with the United Nations.

"We both understand the enormous value to young people's lives by using sports to promote Olympism and a healthy lifestyle. Our approach to taekwondo is that it is a philosophy, a way of life, as well as an athletic pursuit. I think that this paves a harmonious path forward for future projects together."
In the 40 years since its establishment in 1973, the WTF has sought to promote taekwondo's core values of self-discipline, respect and self-awareness to an ever wider audience in both developed and developing nations.

"The World Taekwondo Federation has many accomplishments to celebrate as they mark its 40th anniversary. They have become a great example of the values and objectives that are shared by the United Nations and the Olympic Movement.

"Through its mission as a sport and development activities such as the World Taekwondo Peace Corps, the WTF has done a great job in promoting education of youth, gender equality, healthy living, cross-cultural understanding and international cooperation, so that anyone who wishes to participate can reach for their dreams in life.

"I wish to extend my congratulations to the World Taekwondo Federation and its president Dr. Choue on their 40th anniversary. I wish them a bright future of continued work in international cooperation and development toward peace through sport."