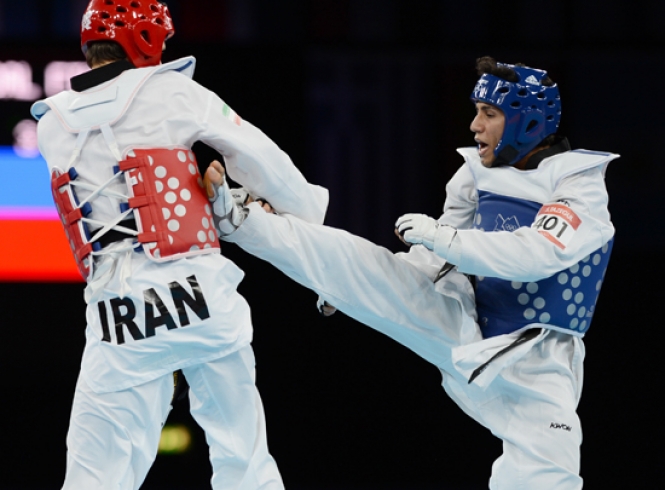 Day two of taekwondo at the London Olympic Games brought waves of Great Britain's Union Flag and massive cheers as Jade Jones took the gold medal in the women's -57kg final to go with her historic Youth Olympic Games gold medal from Singapore 2010.

Jones, making history by capturing Great Britain's first-ever gold in taekwondo in the Olympic Games, had no problem making her way to the finals. She won each of her matches with comfortable point margins just as she did to be crowned as the Olympic gold medal champion.

Jones took the lead in the last seconds of the second round of the match and kept her contender Hou Yuzhou from China at bay until she secured the win with a 6 to 4 victory.

Hou kept up with Jones in the gold-medal final for most of the match, but time wasn't enough for this talented athlete to finish what she started.

In the men's -68kg competitions, Turkey's Servet Tazegul wowed the crowd as he worked his way to the gold-medal match against Mohammad Bagheri Motamed of Iran to capture Turkey's first-ever gold for taekwondo in the Olympics, as well. Tazegul's gutsy performance of bold and dynamic maneuvers edged out Bagheri Motamed for the gold.

The bronze-medal matches really set the tone for the evening session. Each one built upon the excitement of the last and with each one ending in dramatic fashion.

American Terrance Jennings and Rohullah Nikpah of Afghanistan won their bronze medals the hard way by fighting their ways back through repechage matches.

Jennings took on Diogo Silva from Brazil in a powerfully dynamic match that he also won with a last second head kick to take the edge and claim the prize 8 to 5.

The history-making Nikpah edged out Great Britain's Martin Stamper in one of the most dramatic matches of the night. Just as Jennings before him, he also come to the bronze-medal match by way of repechage and overcame host country favorite Stamper 5 to 3 to acquire Afghanistan's only second medal in Olympic history.

Nikpah won the first medal for his country at the Beijing 2008 Olympic Games in taekwondo. It was also a bronze.

Marlene Harnois of France won her stunning match against Mayu Hammada of Japan with a thrilling last second head kick that put her up 12 to 8 to clinch her bronze medal.

Chinese Taipei's Tseng Li-Cheng dominated Finland's Suvi Mikkonen in the second women's bronze-medal match winning by point gap 25 seconds into the third round with a score of 14 to 2.