top
NEWSNEWS
"THF on the move" in Eswatini, Africa

Taekwondo Humanitarian Foundation (THF) once again participated in the historical challenge featuring only the best in Taekwondo competition in Eswatini, Africa July 1-3 2022. The second only of its kind organized by the Eswatini Taekwondo Federation (ETF) hosted several nations from the region including South Africa, Lesotho, Mozambique, Zimbabwe, Botswana, Zambia and Angola.

Some of Africa’s Champions posing with THF Board Member Dr. Richard Barnor.

What made this competition unique is the participation of THF in collaboration with Eswatini Taekwondo Federation (ETF) and the inclusion of a large population of THF refugee children and athletes from the Malindza Refugee Center. A letter from the Chairman and President of THF Dr. Chungwon Choue to the Hon. Madze Harris Bulunga Minister of Sports, Youth and Culture, affirmed THF’s commitment to the empowerment of refugees. Dr. Choue also expressed his hope that THF and the sports ministry of Eswatini can cooperate in empowering refugees and bringing hope to displaced persons through Taekwondo in his country.

Participants from Eswatini championship including some of the refugees.

As further assurance of the President’s commitment, THF representative and board member Dr. Richard Barnor was in attendance to participate in the games. Dr. Barnor was a guest of Minister Bulunga and several of his cabinet members where he had the opportunity of sharing with them about THF’s activities around the world. ETF Secretary Sizwe “Mshengu” Mabuza spoke at length about his Federation’s activities training refugee children in the camps for special programs. Dr. Barnor appealed to Minister Bulunga for his government’s support both financial and otherwise for the Federations activities with the refugee children. Hon. Bulunga assured Dr. Barnor that in light of what THF is already doing in his country with young refugees, he would certainly give it a serious consideration going forward.

The competition was full of excitement and therefore lasted late into the night so some of the winners could not get their medals because they had to be back at their refugee camp. Several members of ETF leadership together with Dr. Barnor drove to the camp the next day to award the medals to the winners. It was unlike anything else the camp had witnessed. With friends, family and camp residents in attendance Dr. Barnor congratulated the winners and presented them with their medals. Watching the jubilation and excitement of the children. Dr. Barnor said he had a difficult time holding back his tears because he was witnessing firsthand the difference that THF is making in the lives of refugee kids most of whom have lost everything including their parents, and living in a camp without any assurance of ever going back to their home. It was a moment WT family and THF saying to the kids that we truly care and that through their training in Taekwondo, thanks to THF they can dream and hope again. 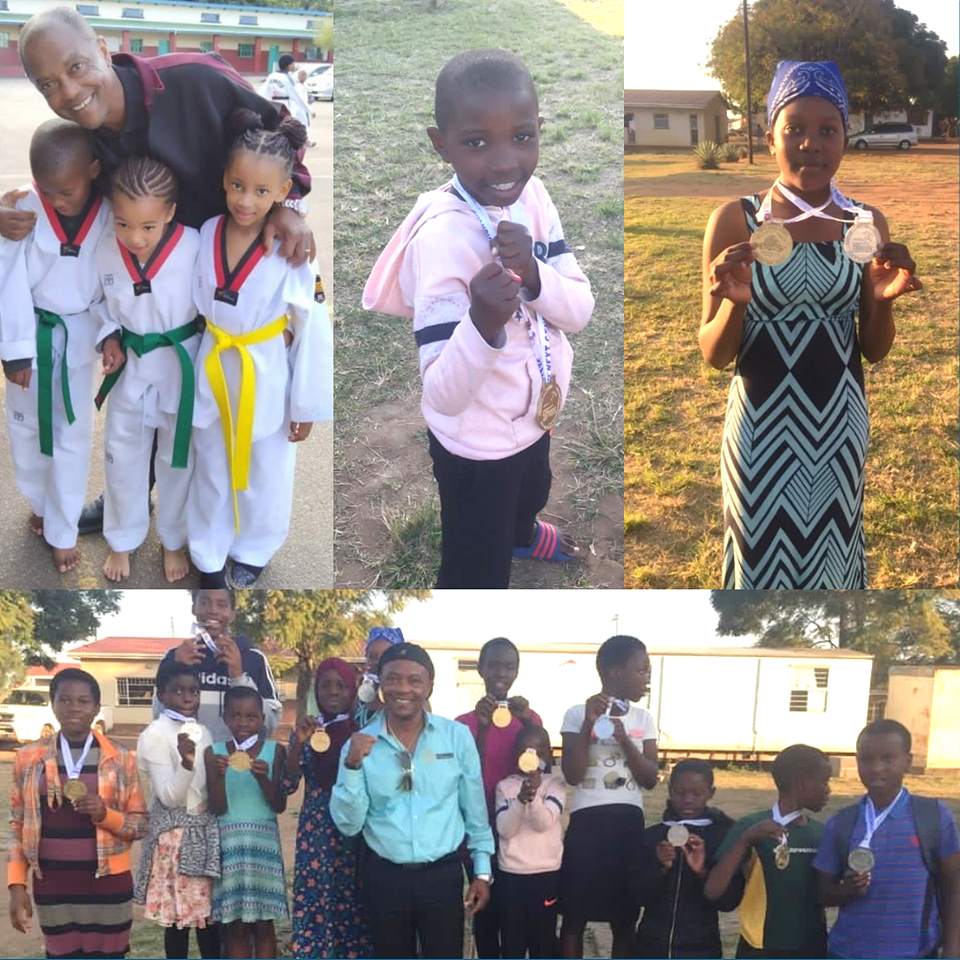 Awarding the refugee champions in their own camp “Malindza Refugee Center”.