In the women’s -67kg Jordan’s Julyana Al-Sadeq and France’s Magda Wiet Henin met in the final. Al-Sadeq had never won a Grand Prix medal before so she went into the match knowing she would set a new personal record, whatever the outcome. Wiet Henin took an early lead in the first round with a kick to the body. Al-Sadeq grew into the round and landed a kick to the body of her own before managing a spinning kick to the body to take a 7-3 lead. A kick to the head followed by a body kick extended her lead and she finished the round 15-3.

Two early Gam-jeoms saw Wiet Henin take a 2-0 lead at the start of the second round. The two fighters defended well without either really able to break through. Wiet Henin landed a front kick to the body in the closing seconds to win the round 4-1 and take it to a third round.

Wiet Henin opened the scoring in the third round with a kick to the body. The score remained 2-0 for the majority of the round but in the last 15 seconds the two fighters exchanged fire with Al-Sadeq landing a head kick and Wiet Henin registering three consecutive kicks to the body to win the round and the match.

In the semi-final Al-Sadeq faced Korea’s Jan-Di Kim. In the first round it was just one kick to the body which separated them and gave Al-Sadeq an early lead. A low scoring second round saw Al-Sadeq claim the match as she won the round 4-1. In the second semi-final Cote D’Ivoire’s former World Champion Ruth Gbagbi was matched against Wiet Henin. In the first round the pair couldn’t be separated on points as it finished 2-2 but Wiet Henin won courtesy of the nature of her kicks. The second round reflected how evenly matched the two fighters were as Wiet Henin won again but with a score of just 2-1.

In the second round, Weekes took the lead again with a kick to the head. Lee thought she had landed one of her own only for it to be ruled out by the referee. With 25 seconds remaining Weekes was 4-0 up but in a repeat of the first round, Lee managed to end the round the stronger. She landed a kick to the body followed by a head kick which knocked Weekes to the ground. Lee won the round 7-4 to take the gold medal.

Weekes had overcome Great Britain’s Rebecca Mcgowan in the first semi-final earlier in the evening. The Puerto Rican scored within the first few seconds and did not look back as she won the first round 9-0. McGowan started the second round aggressively but could not convert it into points. A successful review gave her the lead but she was quickly pegged back by Weekes who landed a last second kick to the body to win 6-4. Lee had faced home favourite Maristella Smiraglia of Italy in the second of the semi-finals. Smiraglia was the first to score but Lee had too much in the first round and won 6-1. With the home crowd roaring her on, Smiraglia took the lead in the second round but Lee’s experience proved too much and a head kick restored her lead and won her the round and the match.

The men’s +80kg final got off to a frantic start with Turkey’s Emre Kutalmis Atesli landing an early head kick to take a 3-0 lead against Olympic champion Cheick Sallah Cisse from Cote D’Ivoire. A punch and Gam-jeom for leaving the octagon brought the score to 3-2. Cisse found his range with a double punch combination to bring the scores to 5-5. With seven seconds left the scores were tied at 6-6 but with the last kick of the round Atesli connected cleanly with Cisse’s body protector to win the round 8-6.

Just under ten seconds into the second round Cisse was forced to retire due to an injury meaning Atesli won gold. Atesli celebrated with his compatriot Hakan Recber in the crowd who also won gold for Turkey last night.

Atesli had faced Great Britain’s Caden Cunningham in the semi-final. The young Brit had led for the majority of the first round. With only three seconds to go both fighters landed head kicks but with Atesli’s a spinning head kick he took the round. Cunningham was not able to recover and lost the second round 7-5. Cisse had matched against Dejan Georgievski  in the other of the men’s +80kg semi-finals. Both fighters brought high energy to the first round and landed a number of powerful kicks to the body. It was a round full of plenty of drama and excitement and after a number of reviews it was Cisse who won 14-6. The second round did not deliver quite the same high-scores but was no less enthralling as Cisse managed a narrow 4-2 win.

The Roma 2022 World Taekwondo Grand Prix will conclude tomorrow with the women’s -49kg and men’s -80kg. 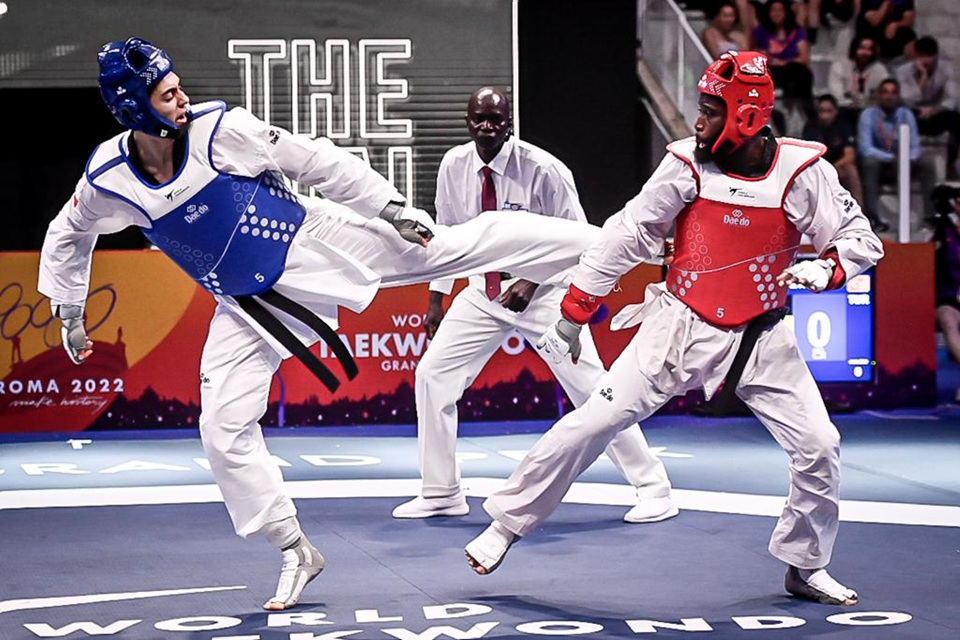