ROME, Italy (Jun 3, 2022) - The Roma 2022 World Taekwondo Grand Prix got off to a breath-taking start today with China, Korea and Tukey taking the three gold medals on offer at the iconic Foro Italico venue.

It was the first Grand Prix to be held since 2019 and the world’s best athletes made it worth the wait as they treated the energetic and vocal audience to some spectacular Taekwondo. It was also the first time the Grand Prix has been conducted with a best of three rounds format which encouraged athletes to try to win every round and attempt the most spectacular techniques.

The women’s -57kg brought together two-time Olympic gold medallist Jade Jones of Great Britain and China’s Zongshi Luo who was returning to competitive Taekwondo for the first time since winning bronze at the World Taekwondo Grand Slam in Wuxi in 2019. In the first round, Jones came out the more aggressive, but it was Luo who registered the first points with a kick to the body protector. Consecutive body kicks, extended Luo’s lead before Jones pegged her back with a spinning kick to the body. However, Luo took advantage of her height and leg advantage to land a number of head kicks and win the first round.

Luo took an early 2-0 lead in the second round. A head kick from Jones momentarily gave her the lead before Luo pulled it back and the score was tied at 5-5. The score remained very close until the closing moments when Jones searching for the winning kick was forced into a number of Gam-jeons. Luo proved too strong and won the round 12-5 to win the fight and take gold as Jones took silver.

In the earlier semi-finals, USA’s Tokyo 2020 champion Anastasija Zolotic had faced Jones.  Zolotic won the first round after Jones had taken an early lead, only for Jones to tie up the match by winning a hard fought-second round before winning the third to take the fight.

In the second semi final, Canada’s Skylar Park faced Luo. Park was coming off the back of gold medals this year in the Sofia 2022 Open and Pan American Championships, but despite her recent successes Luo proved two strong and won the first and second round to claim the match.

It was Tunisia’s Olympic silver medallist Mohamed Khalil Jendoubi against Korea’s Jun Jang in the men’s -58kg final. The opening round began slowly before it burst into action with both fighters landing kicks to the head. In a flurry of action, it was Jang who proved to be the more accurate and found his range to take the first round 12-7. The second round continued as the first had left off, with Jang able to pick off Jendoubi while defending against any counter attacks and forcing him into a series of Gam-jeons. Jang won the second round with a commanding score of 10-1 to secure gold.

The last final of the night matched Tokyo 2020 bronze medallist Hakan Recber from Turkey with Sweden’s Ali Alian. Recber made an early signal of intent with a kick to the head to take a 3-0 lead. Three Gam-jeons brought the score to 4-2 in Recber’s favour and from there he never looked like being caught as he extended his lead to win the first round 9-4. The second round began with another early strike from Recber, this time a punch to the protector. With the two fighters grappling to get an advantage, both gave away a number of Gam-jeons. But once again it was Recber who was able to make it count as he landed a kick to the body to take a 6-1 lead which he steadily extended before winning the round and the match 10-3.

Recber had faced Tokyo 2020 silver medallist Bradley Sinden of Great Britain in the semi-final. It had been Sinden who had managed to outdo Recber at Tokyo 2020 but the Turk was keen to avoid a repeat of that here in Rome and proved too strong for Sinden in the first and second round.

The second of the semi-final saw Alian face Korea’s Ho-Jun Jin. Jin took a commanding lead in the first round. But was not able to build in the second round as he failed to land a point against the Swede. Alian won the final round to take the match and move into the final.

The action will continue tomorrow in the women’s -67kg and +67kg and men’s +80kg categories. Stream it live on the World Taekwondo YouTube Channel. 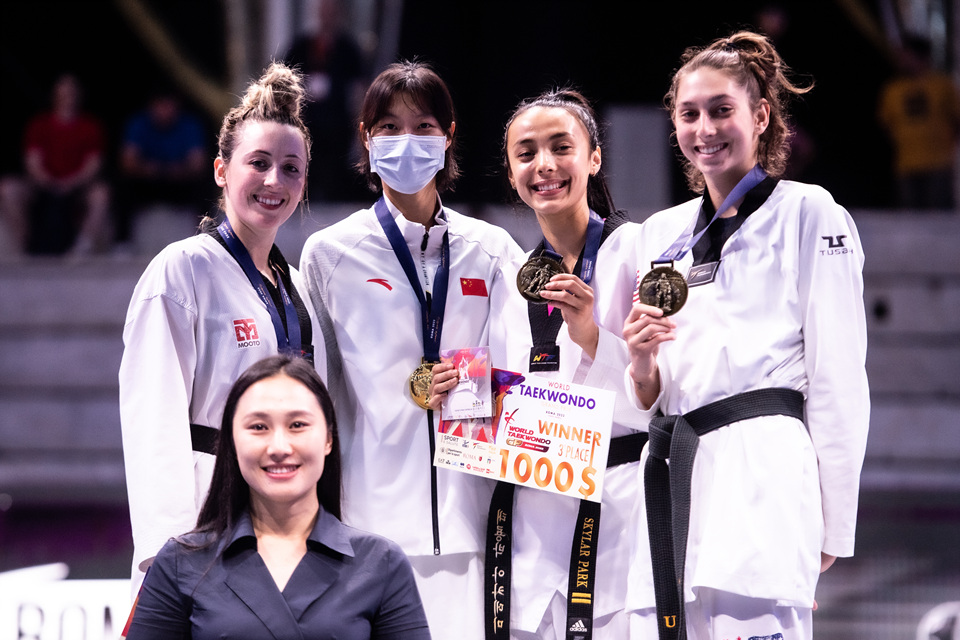