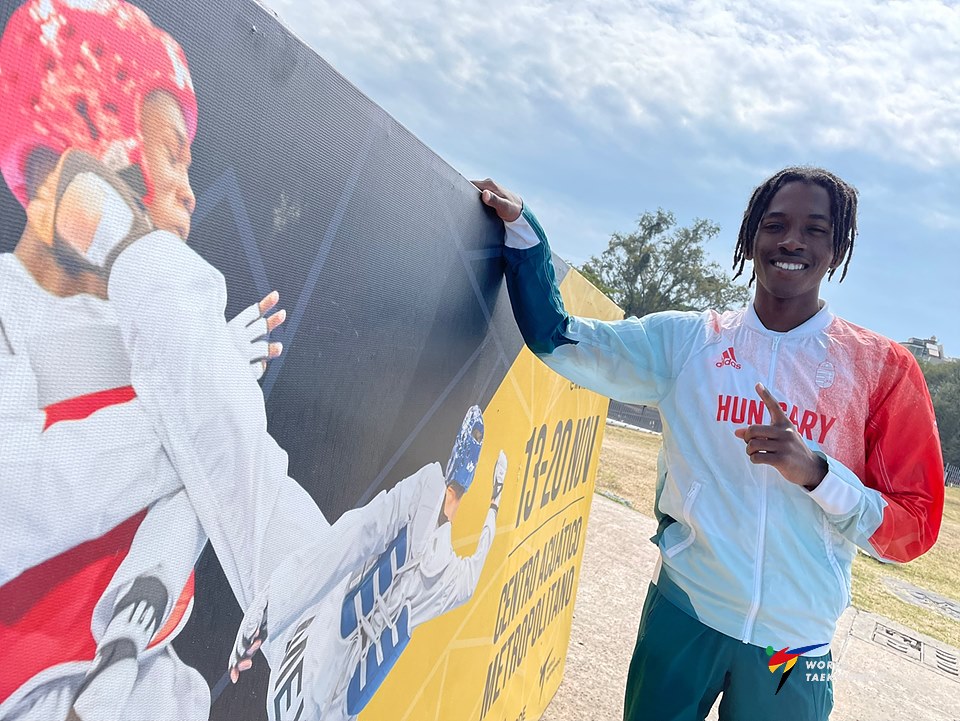 as Salim Jr. followed the footsteps of Salim Sr.

The leonine mainstay of Team Hungary did it against the odds. And he did it with style.

The psychological odds were stacked against Salim as he was matched against hometown hero Cesar Rodriguez in a very noisy stadium. Rodriguez is a fighter’s fighter, boasting endless heart and a firework display of kicking technique. But in Salim’s favor, Rodriguez had fought a searingly spectacular battle in the semis against Korea’s Jun-seo Bae, leaving him sapped.

Salim, on the other hand, had had an easier ride to the final with a more sedate victory against Po-yen Chen of Chinese Taipei.

Round 1 started fast. Salim has a world-class punch, which opened the scoring. Then the Hungarian enlisted his head kick - and with his target radar locked on, lit up the board with lightning techniques. Though this was a world title match, he looked entirely relaxed: talk about peaking at the perfect moment.

In the second, Salim opened fire with his long, high ax kick. His arsenal mixes punches and stabbing side kicks, with close-in round kicks and that arcing kick fired from a loose, low stance. Rodriguez seemed unable to get into gear, or to penetrate Salim’s defense.

Comfortably ahead on the board, Salim spent the last seconds back-pedalling – and was penalized for it - but it ended 11-9 for the world title.

His second round victory against a hardcore fighter with a hometown crowd behind him was not just a brilliant win for the Hungarian – he looked good while he was doing it.

“I am not necessarily trying to look a certain way, I try to enjoy it and have fun,” Salim said of his fighting style. “I have emotions – nerves and anxiety – but I feel when I am in my most comfortable zone, as I was, I enjoy doing what I have been trained to do all these years.”

Indeed: 17 of Salim’s 19 years on earth have been spent in Taekwondo.

“The brain develops differently when you start young,” said his coach – and father – Gergely. “He was in diapers kicking bags at two.”

That long, long apprenticeship in the art has produced a dynamic and ambidextrous fighter with deeply embedded fundamentals, a wide arsenal of kicks and – rarely in competitive Taekwondo – a consistently scoring punch.

Some might consider having a parent who is also a long-term coach to be just too stifling. Not Omar.

“I have experienced other coaching, but there is nothing like being coached by family, let alone by my own father,” he said. “I am so used to him being in my corner, I would not change a thing.”

Even so, Salim Senior would not mind disengaging and watching the play from a distance. “Sometimes, I wish I could sit in the stands with a drink and popcorn and enjoy from there,” Gergely said.

There should be plenty of opportunities for the fandom to see Salim in action in the months ahead as the competitive circuit shifts into top gear up for the 2024 Olympic cycle.

However, neither son nor father are thinking about Paris yet.

“We take it one step at a time,” Omar said. “It was very important to get this win, it’s a lot of points, but now we are moving on to the next competition. I don’t want to force the agenda.”

“I don’t think it helps to look at such a big picture,” Gergely said. “It’s better with small goals, we take it match by match, as every competition is a different competition.”

Taekwondo is a way of life for all the Salims.

Omar’s older brother Sharif fought in Guadalajara, and made the Round of 16, but did not reach the finals. The boys’ two sisters also train, and the family business is their dojang, “Salims’ Taekwondo.”

In a global sport, they are a truly global family: Of Tanzanian ancestry, they hold Hungarian nationality and live in California’s world city, LA.

There, when he is not training or teaching Taekwondo, Omar runs on the city’s beaches and surfs its famed waves. With his athletic physique, colorful sports gear and dreadlocks, he exemplifies California cool.

His father admits that aesthetics matter – sporting aesthetics, that is.

“For me, as much as I want to win, I think it should look nice, so if, at the end of day we lost, but make the game look nicer, I’d be OK with that,” Gergely said. “It has to be dynamic! It has to be fun to watch!”

But sport has more than a physical side; it is emotional, too. Was replicating Salim Senior’s 1991 feat on Salim Junior’s mind in Guadaljara in 2022?

During the bout itself, he blanked it out, Omar said. But he admits: “It is something I had thought about all my life – that it would be amazing to replicate it.”

“We never talked about it,” Gergely said. “But now we talk about it!”

Clearly, Guadalajara gold was meaningful for the Salims. But it was also bitter sweet.

“The person that got the whole family into Taekwondo was my brother, who passed away this year,” Gergely said. “There was so much heartache and now we have got something so positive, it melts my heart, it is indescribable – Omar’s biggest fan was my brother.” 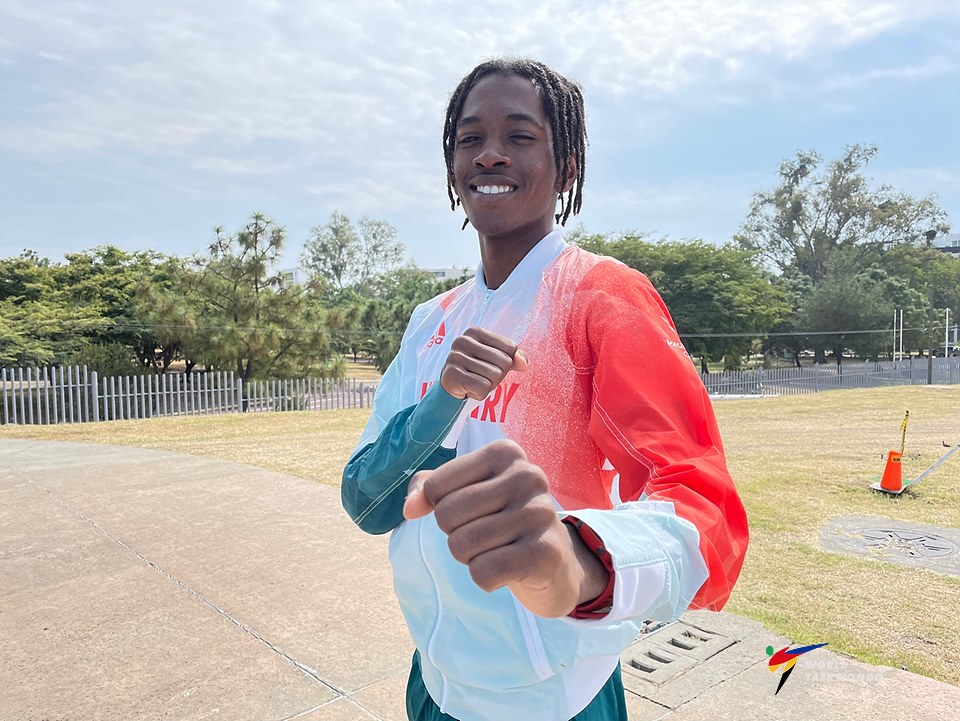 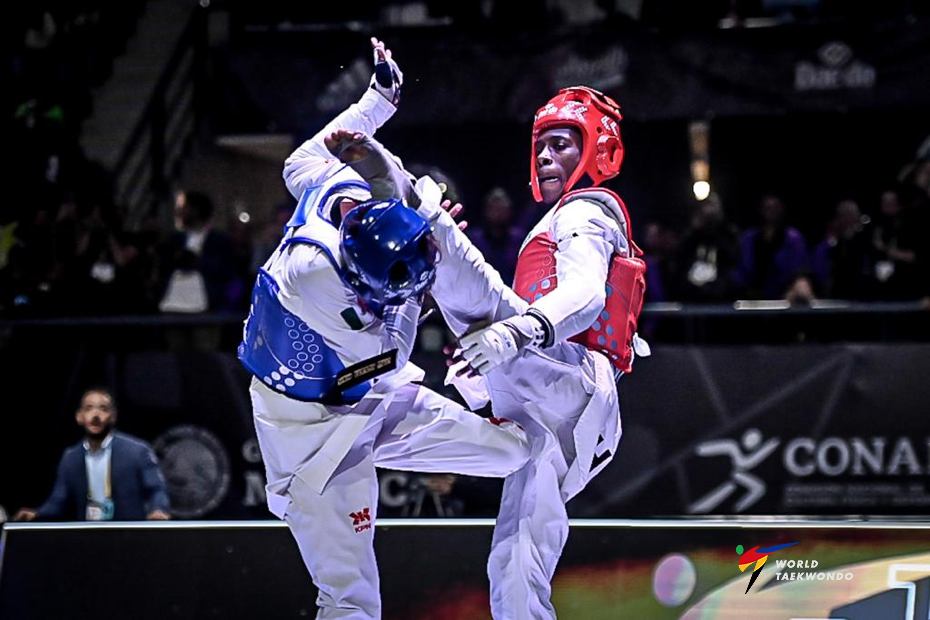