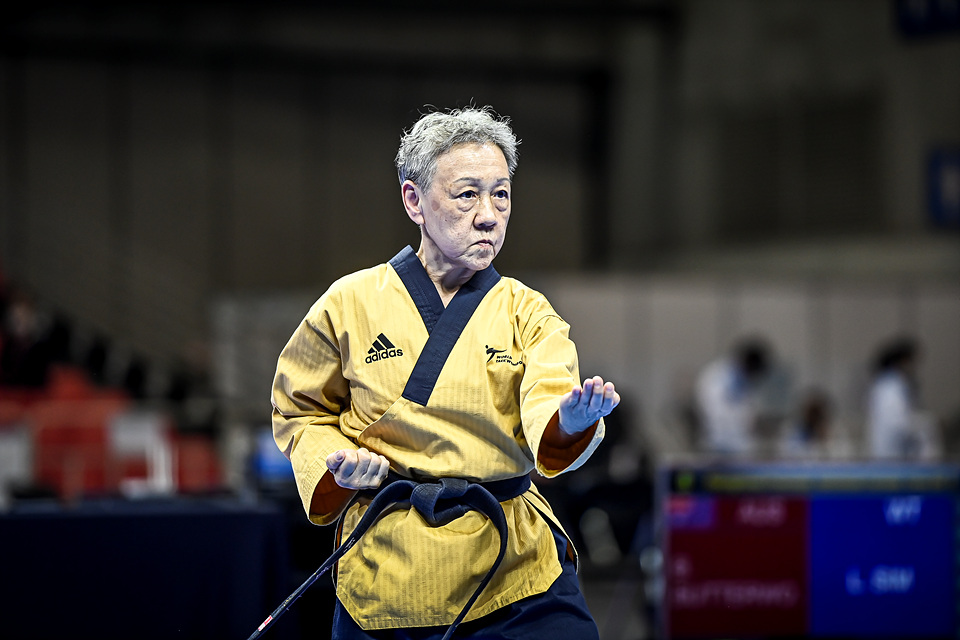 A tiny woman with a massive personality, Sim has travelled the world, eased suffering and captured gold

GOYANG, Korea (April 28, 2022) - Sister Linda Sim, who captured gold in the senior category in Goyang, is tiny in stature but huge in character.

Case in point? Her behavior when she met His Holiness Pope Francis.

In 2018, Sim was invited to join the World Taekwondo delegation that the Italian Taekwondo Federation arranged to visit the Vatican. During the audience, as the Pope walked by the Taekwondo group, a selfie was taken, but the diminutive Singaporean was not in it.

Sim made a snap decision to go off-script.

“I thought, ‘This will not do!’ So, I jumped up from the seats and grabbed his hand,” she said – even though she knew that the Pope is not a fan of that behavior. “I said, “Father! I am a Franciscan Sister! Give me a blessing - please!”

Apparently surprised but charmed by this unusual package - a small but gutsy Singaporean nun, attired in the uniform of a bona fide Taekwondo master - the Pope assented.

“I kissed his hand and said, ‘Could we have a picture?’” Sim recalled.

Images taken on the day show his bodyguards frowning - “They were appalled, flabbergasted,” Sim laughed – but the Pope himself grinning next to a radiant Sim.

From Singaporean Army to ‘God’s Army’

Before becoming a nun and missionary, Sim took up Taekwondo in 1971.

“Ever since I was a child, as far back as I can remember, something in me longed for martial arts,” she said. “I have always been petite and small in stature, so I wanted to learn something so that I don’t have to carry a weapon – I wanted to be the weapon!”

Her youthful ambition was to join Singapore’s military. “I went to the armed forces, but at that time, there was no field service for women – only clerical duties.”

That was not what Sim had in mind. She did a rethink and decided to aim for the police.

“I thought if I learned a martial art, I could join the police force, but I did not have the height or the weight,” she said. “I tried to grow - but I could not!”

She enrolled in a Taekwondo class in a local church – and never looked back. Today, she wears a 5th dan black belt, is a certified Singaporean referee for both Kyorugi and Poomsae and has 32 competitive medals.

She did change her career choice, though.

When she encountered Sisters of the Franciscan Missionaries of the Divine Motherhood, she saw a different kind of service. “I thought, ‘Why not join God’s army? If that is not service – what is?” she asked.

Throughout it all, she never stopped Taekwondo. Which raises an obvious question: What use is a martial art to a Catholic nun?

“It has always been a contradiction,” she admitted, “People say, ‘What has Taekwondo got to do with a Sister?’”

She has the answer.

“For me, there is only one spirit, whether it is the Christian spirit or the Taekwondo spirit - it is a universal spirit,” she said. “Values matter: Love! Peace! Respect! Harmony! Unity!”

Her Taekwondo training also helped in her early religious years as she adapted to an austere life.

“My Taekwondo training before I became a sister instilled values of disciple, love, service and respect,” she said. “This helped me throughout my religious formation years, which were difficult.”

The Dancer and the Dance

“It was contact sparring and there was no padding and no weight categories,” she said. “I really went for it and got a bronze, but I was really beaten up, so that was the one and only!”

After joining the Franciscan Sisters, she walked the missionary path across the world from 1999, only returning to Singapore to settle down in 2004. For that reason, she came late to international competition, in her 50s.

Of course, that competition was Poomsae.

“I love doing Poomsae! For me, it is a meditation where the player and the Poomsae become one, like a dancer and a dance, it is a deep experience of one-ness,” she said. “It is about excellence not perfection. It is an ongoing journey. You don’t arrive.”

The journey is one of self-discovery.

“Every Poomsae I do, I discover parts of me,” she said. “Life is about learning and discovery.”

Her talent and hard work took her, first, to the Vladivostok 2011 World Poomsae Championships, and then onwards and upwards. She won bronze in the Taipei 2018 World, but in 2022, questions hovered over her fitness.

“Age is catching up with me,” she said. “I have injuries all over.”

While martial arts training instils longevity, there is an inevitable downside: wear and tear on the body machine. Sim’s list of wounds makes clear that she is a true warrior.

“I have strains in both knees – MRIs tell me I should not be kicking,” she said. “And both shoulders have tears.”

Another age-related factor arose during the pre-championships training, when she was working out with the Singapore National Team.

“Training with young people was a challenge,” she said. “The next oldest was 27. I felt like a dinosaur!”

In February, she sustained a new knee injury and had to stop training for two weeks. In recovery, she applied a brace and soldiered on. But just before she got up to perform in Goyang, there was another shock.

“When I came up to the mats, they told me, ‘No braces and no taping.’ I thought, ‘I never kick without a brace or support.’”

“Because of the spirit of Taekwondo, I could overcome the pain barrier,” she said. “That taught me what indomitable spirt is – it’s, ‘Go for it!’”

Though she could not stamp as hard or kick as hard as she wanted, and pivoting was a risk due to joint instability, her kicks were high, her movement precise – and her performance was spot on.

“It is a miracle that this body took me to the podium,” she said. “Against all odds!”

After the smoke cleared, the announcement came that she had won gold in the Recognized Individual Female Over 65 category. As a moment in life, “it was a dream come true,” Sim said.

So, what is next?

“I thought this was the ultimate and if I got a gold medal for my country, I would retire from competition,” she said. “But now that World Taekwondo is considering an over-70 category – why not?”

Walking the path on gentle feet

Sim’s Taekwondo is not just about herself. It is a gift she has given to others in places such as Singapore’s Mount Alvernia Hospital and the Assisi Hospice.

In 2007, she started teaching Taekwondo to institutionalized children with cancer. “There were 10-15 children and they were just playing computer games and board games, so we thought, ‘Why not teach them something physical?’” she said.

Some of Sim’s students became so good that they won titles in national-level competition. But of course, there were losses – losses far graver than any failure to mount the medal podium.

“The cancer took three of them,” Sim said.

But there were wins, too.

“One is now 30, he has a brain tumor and cannot walk and cannot hear, but he was expected to die at 12,” Sim said. “I have two more who are partially blind and deaf, but one is working in a hotel. These are cancer warriors!”

As her life story – bringing hope in places of tragedy, travelling the world, competing on the elite level – suggests, Sim does not believe in locking herself away in a cloister.

In person, Sim is bubbly, talkative, energetic and vivacious. In Goyang, she was dressed in training gear; she said she rarely wears her religious habits. Her role, like that of the rest of her order, is about being among humankind.

“Evangelism should be at the periphery,” she said. “It is about being among God’s people in the world.”

In that line of business, sports training is a plus.

“There are people who never go to church or see religion as part of their life, but there are human universal values that unite us, and Taekwondo allows me to speak that common language, to connect to people,” she said. “It is a spirituality - where there is passion, there is life.”

And even a combat sport has a place in this philosophy of passion.

“Taekwondo is the way of foot and fist, and as human beings, we need to tread the earth gently with our feet - it is a journey, we walk this path,” she said. “The fist can be used for violence but in Taekwondo, it is used for friendship - for connecting, for nurturing and for embracing.” 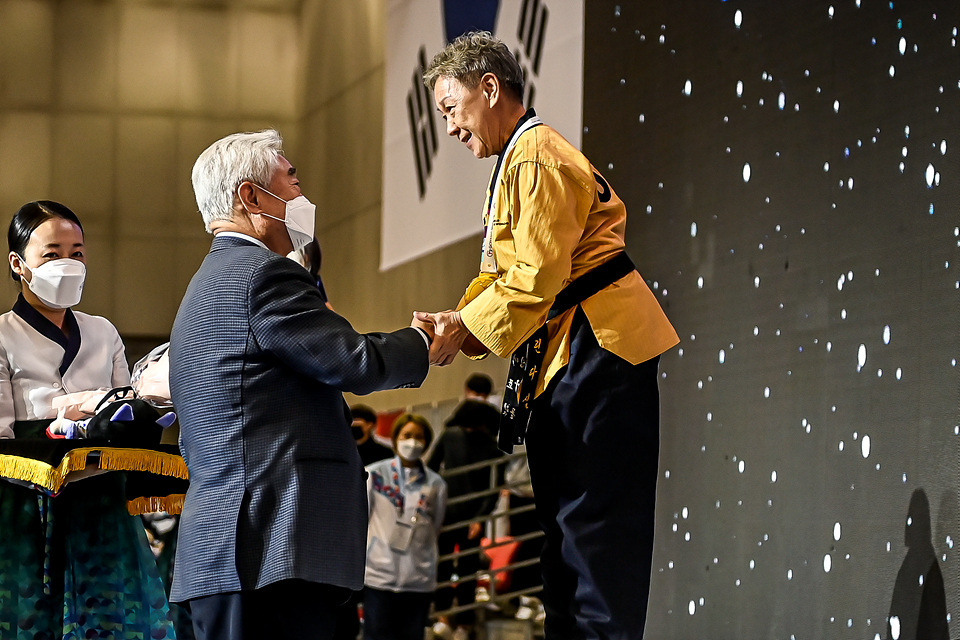