Gasto Nsazimukiza lost his family, his youth, his country.

Aged 10, he lost his family, his home and his country – everything but the will to live. Aged 19, he discovered a path to hope and dignity: Taekwondo.

A decade after starting the sport, he was mobbed by admirers at the World Poomsae Championships. Later this year, he expects to fight in the World Championships in Kyorugi.

Nsazimukiza’s personal story is that of an orphan, entirely alone in the world, enduring misfortune after misfortune. Nsazimukiza’s representative story is the untold story of millions of refugees: The human tragedies lost behind the headlines of global conflict reports.

He was a boy of 10 years old when his life was devastated. It was 2003. Nsazimukiza was the only child of his parents, cattle herders in the Democratic Republic of Congo - a nation racked by civil war. Still, his life, growing up, was that of a normal, rural child – though he often helped his parents with the cows.

All that changed the day armed men arrived in his village.

Nsazimukiza hid under his bed. Outside, shots were fired. “The rebels attacked and killed everyone,” he said.

He emerged from hiding and witnessed horror. “I was the only one who survived,” he recalled.

Traumatized, disoriented and despairing, he escaped with no plan. “I decided to run away,” he said. “I ran for two weeks.”

Knowing nothing of borders, he was picked up by security forces on the outskirts of a village in Burundi. “I am in trouble, I need help,” he pleaded to the adults who surrounded him.

The village chief handed him over to authorities. He was placed in a camp. A new life began – the life of a refugee. He would remain in the camp for the next decade.

While he was taken care of, he continued to fear. Burundi, too was in turmoil. “I left as there was no peace in Burundi,” he said. “I ran away from the camp.”

That was the push factor. There was another motivation at work – a pull factor. “I was looking for surviving family,” he said, hoping against hope to find an uncle, aunt or cousin.

Congolese refugees were scattered across the vastness of the African continent. Nzasimukiza took to dusty roads, walking for two months.

He did manual work in Rwanda, then moved on to Uganda. There, he worked as a water carrier in return for food. Still seeking family members, he proceeded to Kenya, a country with a vast refugee population.

Nzasimukiza found a new home in a new refugee camp. But when it came to surviving family members, his quest came up empty. “I did not find anyone,” he said

But in the camp, a fellow refugee from Ethiopia was teaching something that caught his eye. In was a sport that is almost perfect for those with nothing for it requires no special space, no special equipment, just the human body: Taekwondo.

The power of sport

He started training. His lean physique and his stoic mentality – both forged in the hardships he had experienced - suited the sport. He found a talent.

Kenya is home to some of the finest long-distance runners on earth. One of them is Tegla Loroupe, a former marathon world record holder. Now a global spokesperson for peace, rights and education, she runs a foundation in her own name that talent- scouted Nsazimukiza via a series of races.

“They brought so many people there, so many refugees,” he recalled. “They had two events – the 10km and the 15km. I chose the 15km and came second.”

He moved to a training camp in Nairobi in preparation for the 2016 Rio Olympics. Loroupe was the Chef de Mission managing the IOC’s Refugee Olympic Team.  A new future beckoned. “I was almost there,” Nzasimukiza said. “But my colleague went.”

It was yet another cruel blow.

Though he was now being sponsored as a runner, his true love remained Taekwondo. In 2018, he found a coach in Nairobi: George Wasonga Oyoo. He shifted his sportive focus away from running.

After just one year under Oyoo’s tutelage, he started competing in African Opens. He won his first medal, a bronze in Rwanda, in 2019 - then another in Botswana.

For the second time in his life, things were looking up. Once again, fate intervened.

“The pandemic came to Kenya, and I was taken back to the camp,” he said. “There, I was running and doing Taekwondo, but I had no training partners.”

His hopes of joining the Refugee Olympic Team for Tokyo 2020 were dashed. “I had expected to get to the 2020 Olympics in Japan,” he said. “I felt bad.”

Only in 2021 was he able to return to training under Oyoo. That year, he entered his first continental-level event: The African Championships in Dakar, Senegal. He won his first bout, but lost his second.

Despite the lack of a medal, Oyoo was pleased with his performance. “We thought he did a good job,” he said.

Nsazimukiza is now 30 – old for a full-contact sport where players tend to peak in their early-mid 20s. He also has tight hamstrings from his running training, and his earlier experiences of long, long walks.

“His cardio is very good, but not so much his flexibility and agility,” said Oyoo. “He is a very strong fighter – powerful - but we need to give him skills, we need to expose him to competition so he develops consistency.”

On the converse, his many misfortunes have gifted him with some powerful attributes.“He is highly disciplined,” Oyoo said. “And he is a strong character – fearless!”

And he is – at last – getting some support, courtesy of the Kenyan sporting community and the IOC.

“Our federation is doing what it can and our government is very supportive and is collaborating with the Tegla Loroupe Foundation,” Oyoo said. “The government paid for his air tickets as in Kenya we value everyone – there are so many refugees in Kenya, and we give them equal opportunities.” Nsazimukiza also holds an IOC scholarship.

This combination of supportive mechanisms has given his coach considerable confidence when it comes to Paris. “I know that, in 2024, he will be in the Olympics,” Oyoo said.

That is a goal for Nsazimukiza to work towards – and he is clearly well liked by his colleagues on Team Kenya, who have taken him under their wing, and with whom he trains every day.

Though he is a Kyorugi athlete, he has always been drawn to Poomsae. “Poomsae was my interest, so coach started teaching me,” he said. “We bought him into Poomsae, as we want him to be engaged as much as possible,” Oyoo explained. “Poomsae teaches basic skills, and those will help him advance his Kyorugi.”

Hence, his presence at the Goyang 2022 World Taekwondo Poomsae Championships. The only refugee athlete to perform in a special showcase, he earned the loudest round of applause of the championship.

As he exited the field of play, he was high-fived, then mobbed by members of the audience – some of whom held up placards of support – as well as by Korean staffers of the office of the UN High Commissioner of Refugees who had heard his story.

He was “surprised” by the reception, he admitted.

“People see refugees participating, and people understand that, as a refugee you lose many privileges, but still do Taekwondo,” said Oyoo. “That touched the hearts of so many people.”

There is no question that his fate has shaped Nsazimukiza’s character and outlook.

Despite his athleticism, he has a gentle demeanor and a very soft voice – several times, this interviewer had to ask him to repeat himself. His smile carries within it a hint of sadness that makes him look older than his 30 years.

“In life, you have to accept anything,” he said. “The question is whether you can take care of yourself.”

Now, he at last has some security and a goal. He has has also reached the point where he is not just thinking about sports.

Nearly two decades after the calamity that devastated his life, the chance of finding any surviving family members looks slim.

Instead, has a new hope: To be offered a home.

He pauses, then speaks more softly than ever.

“Sometimes, I just ask myself why I can’t be like other people,” he mused. “But meeting different people through sports gives me peace in my mind.” 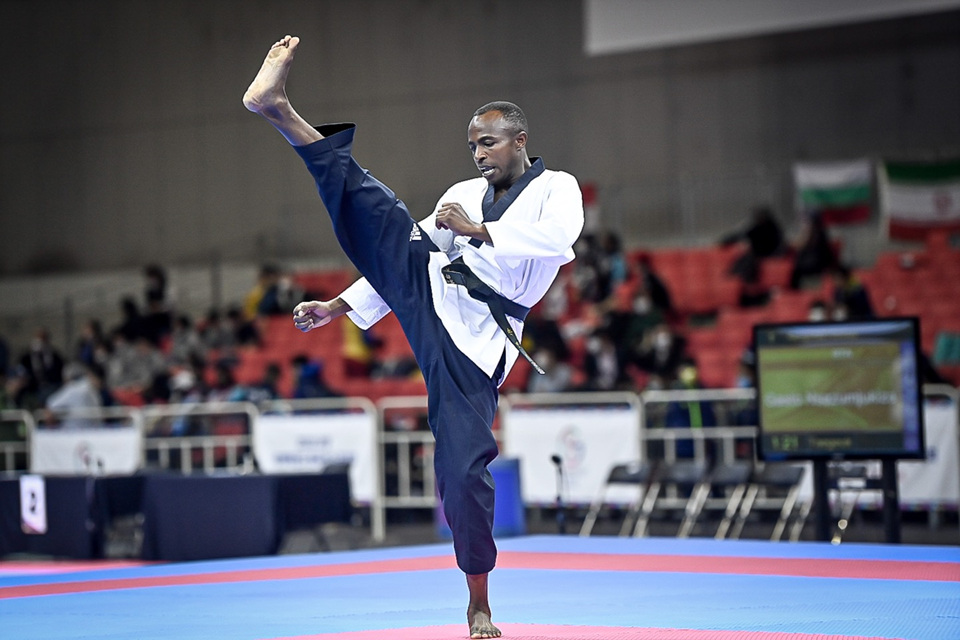 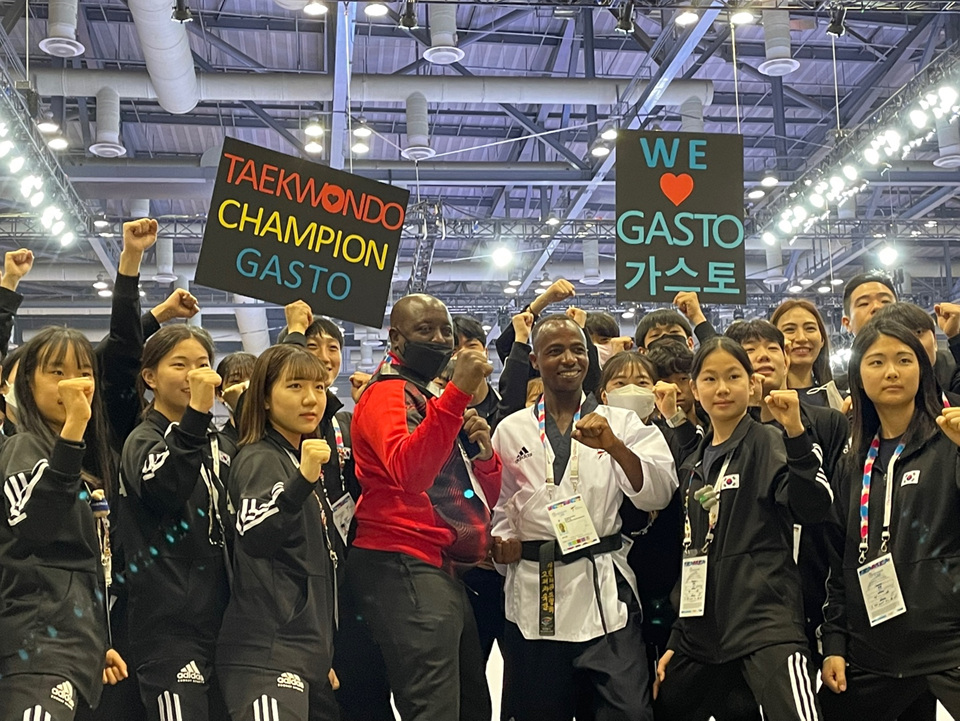