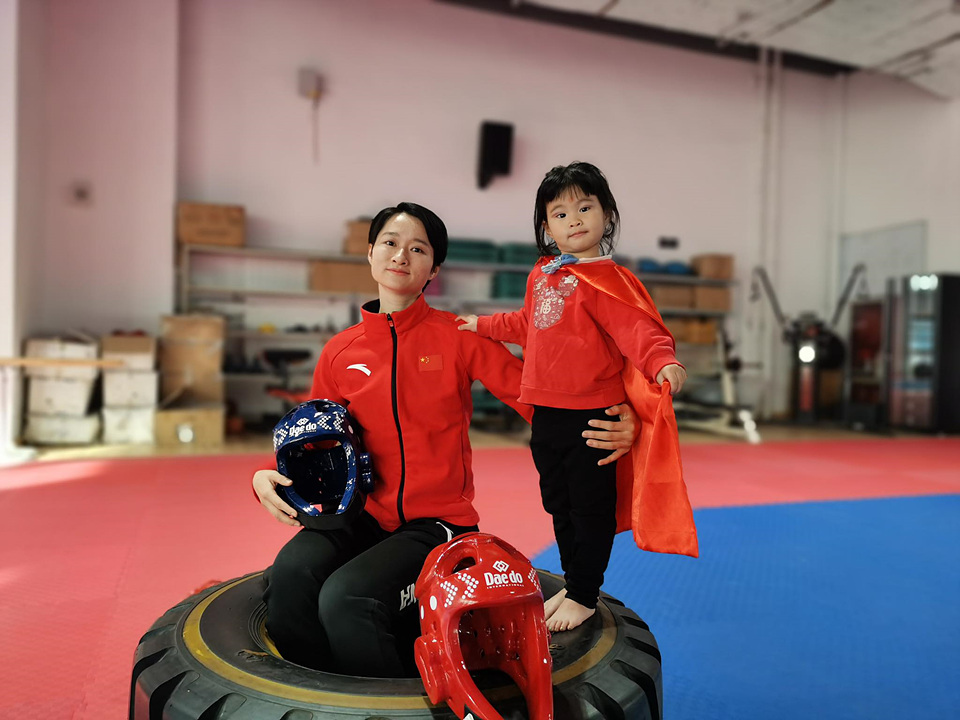 SEOUL, Korea (February 22, 2021) - One of Team China’s most famous athletes urge a universal approach toward taekwondo, toward the Olympic Games - and toward the battle against COVID-19.

When you are one of the most iconic taekwondo fighters of all time, gearing up for your last Olympic Games and the news comes that the event has been canceled, the impact is devastating.

“When I heard the news of the postponement of the Olympic Games, I wanted to return to my home country immediately, because I was training with the national team in Japan at that time,” said China’s Jingyu “Super Kicker” Wu. “I wanted to see my family, especially my daughter Gloria.”

Wu, along with Jade Jones of Team GB, is one of two fighters in Tokyo aiming at a third Olympic gold – something no taekwondo fighter has yet achieved. But compared to Jones, Wu’s task is even sterner.

The gold medalist from Beijing 2008 and London 2012 has stormed out of retirement and is hoping to smash an Olympic record in Tokyo in 2021 at the age of 34 – ancient in taekwondo terms – after having given birth to a daughter Gloria three years ago.

Being an athlete and mother is no easy task. And the life of an Olympian is even tougher. Though Wu and the team made it back to China in April, where the country was starting to beat the virus - “everything was very orderly” - after a short break, it was back to the hardship and monotony of training for 2021.

“During the pandemic, we used the WeChat App to train and communicate with our teammates,” Wu said. “A good training plan can effectively regulate physical skills, which my coach Guan Jianmin has done very well. To be honest, it is not easy to maintain a high level because of my age, but I try.”

Team training restarted. “We had to train outside Beijing city” - where Wu makes her home – and the training sessions were closed.

Amid her preparations, Wu is – like the rest of the world - hoping for a better year ahead.

“Now, we are in 2021!” she said. “I hope the Tokyo Olympics can be successfully held, and I also hope that I and my teammates can achieve excellent results.”

Clearly, the Olympics, scheduled to kick off in July, is going to be a global litmus test. It will reveal whether or not humanity has mastered the pandemic, and is free to travel and gather in Tokyo in large numbers.

“The Tokyo Olympics is destined to be an extraordinary Olympic Games,” Wu said. “Its successful hosting will surely bring more positive energy and hope to people all over the world.”

Citing #TogetherStronger, she is adopting a fighter’s stance toward the battle against the pandemic.

“Let everyone be more confident to fight the pandemic in unity,” she urged. “We will return to our original happy and peaceful life.”

But her last thought is not for herself or for her team - it is for a very special team of athletes that the IOC and WT will be fielding at the Games.

“I also want to say ‘Fighting!’ and “Go, go, go!’ to our refugee athletes,” Wu said. “Do not give up! I look forward to seeing you in Tokyo in July. One World! One Taekwondo!”