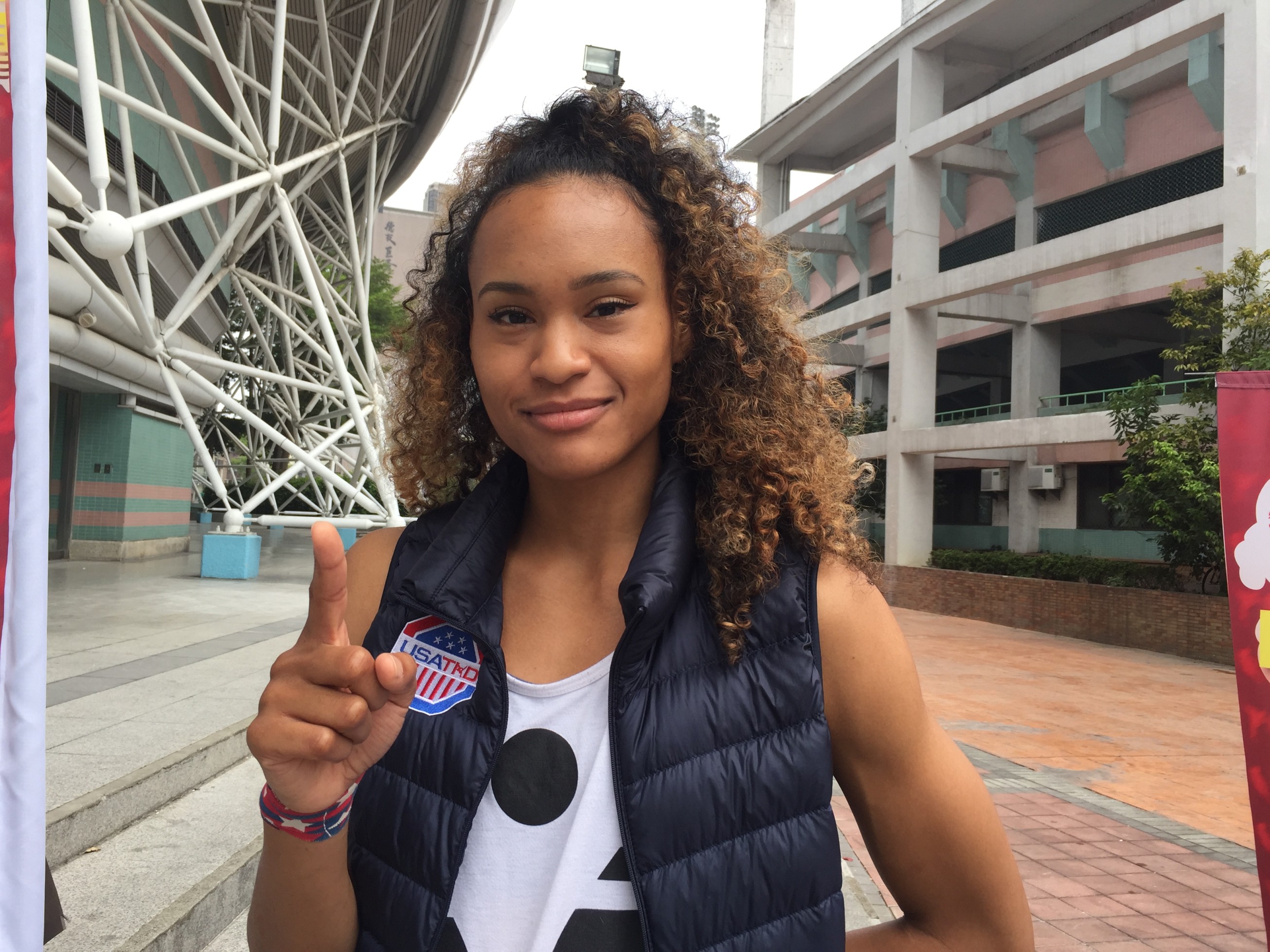 TAOYUAN, Chinese Taipei (Sept. 20, 2018) - Taekwondo is one of the few global sports in which a developing country, such as Cote d’Ivoire, can outperform the hyper-power that is the United States.

Indeed, Team USA, a taekwondo powerhouse in the 1990s, has been an also at premier-league international competitions many, many times in recent years. Which is why there may well have been delight in taekwondo dojangs across the land of the free when Team USA’s Paige “McFierce” McPherson struck gold in at the Taoyuan Grand Prix on September 19th.

“This is truly a dream, this is my very first championship title in a major international event,” McPherson said. “I have always medaled, but this time I finally got the title – champion!”

Earning that title was no easy thing. In the first semifinal of  the night, she took on Rio Olympic gold medalist Hye-ri Oh of Team Korea, a canny and highly experienced player, who, when fighting McPherson at last year’s Grand Prix Finals in Abidjan, was behind in Rounds 1 and 2, but then surged back to win it in the third. Things were different this time.

“She came out to bully me and push me around I felt her trying to feel me out but I put on that strong face and showed it is not going to work with me, and I think that got to her,” McPherson said. “It was a good fight! Obviously it was a dream come true to beat the Olympic champ, but it was a grudge match for me: I wanted to show her she got lucky last time!”

The final was a classic match-up: USA versus Russia. Facing McPherson across the mats was Russian young gun Polina Khan (fighting under her father’s coaching). Khan led on points until the last 10 seconds when MacPherson equalized with a body kick, taking the board to 7-7 and the game to golden point. With neither fighter managing to land in sudden death, the American won gold on penalties.

Her first reaction was, “Did I really win?” she recalled. “It was truly surreal! There was a lot of emotion, not just for myself, but for Peak Performance, and for our head coach, Juan Moreno.”

Her victory was followed from afar. “My parents woke up at 3:00 am to watch the semis, and everyone is ecstatic back home - my family, my team mates back in Miami,” she said. “When I went into the final they were in the gym working out to get ready for the Presidents Cup, they were crowding round an I-phone cheering me on!”

Jennings, currently in a transition from competing to coaching, had been guiding McPherson for just three weeks prior to Taoyuan.  “He and I have been through it since day one, on the same path with the same dream,” she said of Jennings. “We made the 2012 Olympic team together; he is such an amazing athlete and now as a coach has always said the right things.” 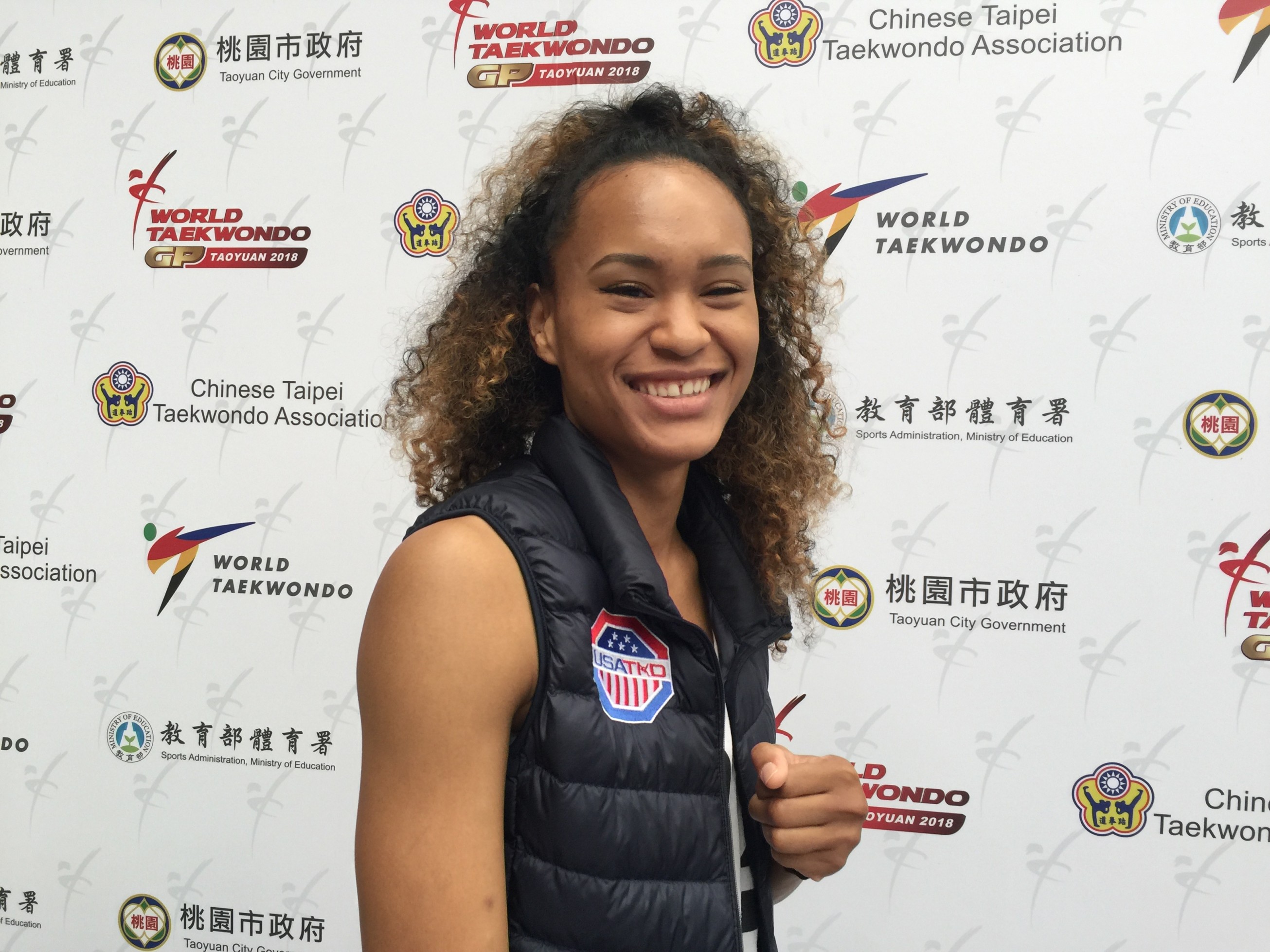 From traditional taekwondo to competitive kicks

McPherson got her start in the sport via her older brother Evan, a Korean adoptee. “I was the little sister, I started after him,” she said. (Her brother has now moved on to a more serious combative format: He is a Special Forces soldier.) She started in the traditional martial art and earned her fourth dan, but is now concentrating entirely on the sport side under the eyes of Jennings, and peak performance’s head coach Juan Moreno – himself, a famed Olympian - and his team in Miami.

A consistent finalist, McPherson has a truckload of trophies, but considers her top three wins bronze at the 2012 London Olympics; silver at the Worlds in Muju in 2017; and Grand Prix gold in Taoyuan. What are her strengths as a fighter?

“I have been fortunate to be trained by one of best coaches in the world, Juan, and he has taught all athletes to be well rounded,” she said. “The ones that are well rounded and able to adjust and adapt to rule and system changes are the ones who are successful.”

In the ring, she is one of the smaller players in her division, but possibly the fastest. Given her size, her strategy is to dominate the fight at the danger-close range. “It is all about the inside game, trying to control the distance, using the front leg cut kick to position yourself to get inside,” she said. “I have developed the punch over the years - that has really helped - and I use upper-body strength to score in the clinch.”  She is also a busy fighter. “You make sure the cover is there, the front arm is out, cancelling the front line – doing more than the fighter in front of you.”

McPherson is upbeat on the recent rule changes that were part-designed to move the game away from “tall-kwondo,” and to aid the more aggressive, forward-fighting players. “Pushing has changed my game, and the two points to the body - before it was truly foot fencing, it was all about who was taller and longer,” she said. “The rules have really helped me. Back in the day, you did not have to be physical - you just had to have the reach.”

But while the American favors the new rules and the electronic scoring system, she and her coach both think the presentation of the fighters needs to be upgraded – starting with the uniforms.

“Nothing we do on the mats now is traditional, we are creating new moves and kicks,” said Jennings, suggesting that these new techniques should be reflected in a new look for the athletes. “It would be nice to see spandex involved, as the dobok does not display what [the athletes] look like: I think there is a way to have a combination, so there is the tradition of taekwondo, but also make it more visually exciting for the spectators.”

Fighting to stay liquid – with the help of ‘the man upstairs’

Competing with other sports is always an issue for taekwondo, which is successfully globalized as a participator sport, but not as a spectator sport. This is particularly problematic in the United States which is not only perhaps the world’s strongest sporting powerhouse, but also the first mover in the marketing and commercialization of sports. There, taekwondo is a very poor cousin in a country that is firmly focused on American football, baseball and basketball, which tend to gain most of the big corporate sponsorships.

“The US Olympic Committee give me a monthly stipend until my ranking  slips - if that slips I will not get paid,” she said, though that she has sponsorships from therapeutic Jaguar and martial arts equipment firm Kwon.  “I have been very blessed to have a family that helped me financially in the past, but it could really end up being tournament by tournament: Losing one could change my financial situation.”

Given the uncertainty of sport results, this situation must generate constant mental pressure.  And yet, McPherson is not complaining. “It comes down to believing in God’s plan for me,” she said. “I have always found a strange way to support myself, and that has God’s hand in it.”

Currently, she is aiming at Tokyo 2020 – and that will be it, as far as fighting goes.

“Definitely, after Tokyo I will transition out of the sport – as in not competing anymore,” she said. “I don’t have a set goal or game plan afterwards.” Alongside her training, she is studying for a degree in Business Management at Florida International University, and post-Tokyo would  “love to be involved in my sport with my country.” She is in no relationship at present, so is “focusing on my career and trying to figure out what I want. We will see.”

For guidance in the years ahead, McPherson will be relying upon what she calls “the man upstairs:” She is deeply Christian. In person, she is also talkative upbeat, cheerful and giggly. So why is such a God-fearing, good egg known as “McFierce?”

“One of my team mates back in Miami said that whenever I get into the ring I change from my general sweet attitude to a fierce attitude,” she said. Referring to her gold-winning performance in Taoyuan, she added: “It worked: ‘McFierce’ came out!”

Paige McPherson at a Glance

Hobbies: “At Peak Performance we love to have game nights: board games, card games. Having time with family – I only see them twice a year in South Dakota. Also, whenever I go home, I go fishing and camping.”

Favorite song:  “Anything by Drake.”

Favorite food: “I love pizza. That is my weakness!”

Why taekwondo? “Taekwondo has opened doors for me, it has given me the opportunity to do something I love and travel round the world and opened my eyes to different cultures and the way people live. It has humbled me.”

Motto: “From ‘Proverbs:’ ‘Trust in the Lord with all your heart and lean not on your own understanding but in all your ways acknowledge him and he shall direct your path.’”