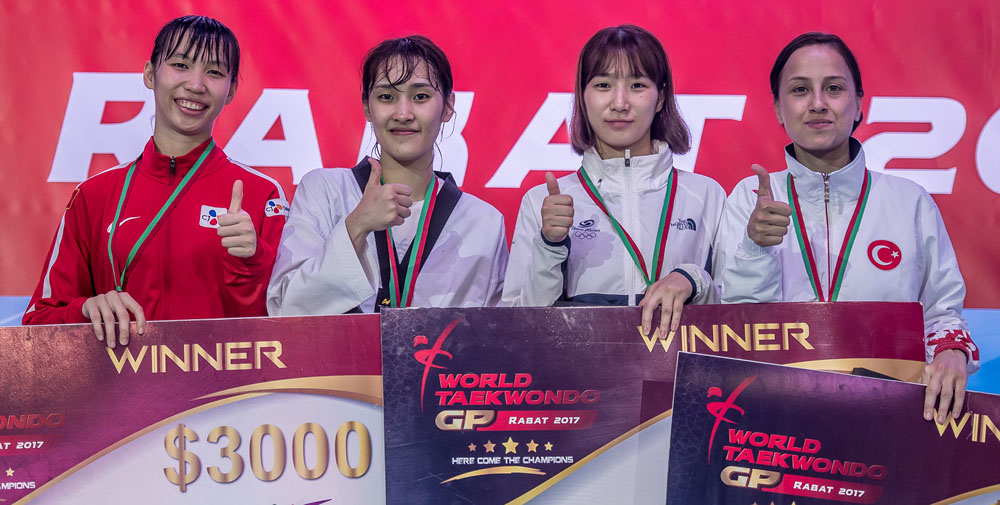 RABAT, Morocco (Sept. 23, 2017) – Two gold medals were won by Korea and one by Cote d’Ivoire on the second day of the three-day Rabat 2017 World Taekwondo Grand Prix Series in the Moroccan capital.

After a performance by a local taekwondo team and a power breaking demonstration, the action got underway in the Complexe Sportif Prince Moulay Abdellah. 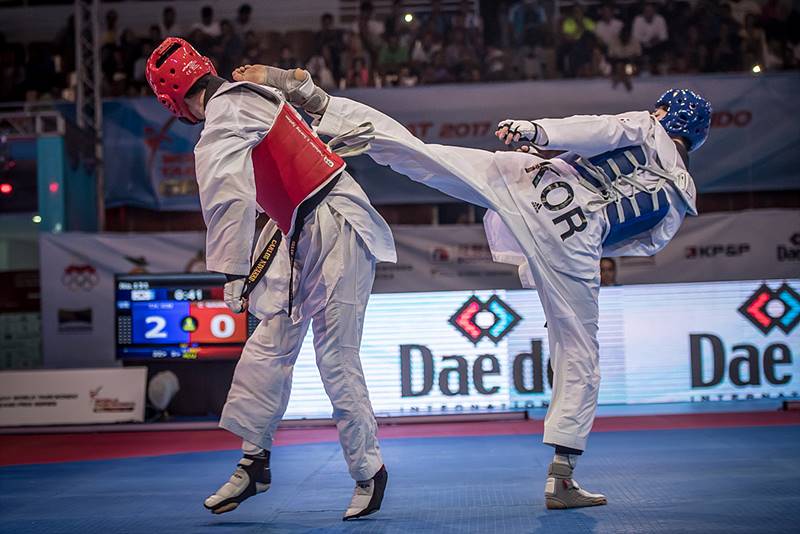 The final in the Male -58kg division pitted three-time world champion and round-kick machine Tae-hun Kim of Korea against the cobra-quick Carlos Navarro of Mexico. Action started in top gear, with both lads feeling each other out trying to find the range. Kim scored first with a body kick, going 2-0 up, while employing superior ring craft that forced the Mexican to dance around the perimeter of the mats. Navarro returned fire, winning three points with a very fast and deceptive spin back kick fired low, from the floor, before Kim landed another of his trademark round kicks, ending the round 4-3. In the second, Kim extended his lead 6-3 and in the third, continued to relentlessly pick up the points, going 8-3 up. Action heated up as the bout counted down, and in a flurry, the board went to 10-5. In the final seconds, Navarro connected with a head kick launched on the run, but the match ended 10-8 with gold to Kim – who is looking near-invincible on his current form - and silver to the Mexican. It had been a notably clean contest that saw the ref awarding no points against either athlete.

Bronzes in the category went to Jesus Tortosa Cabrera of Spain and Farzan Ashourzadeh Fallah of Iran. 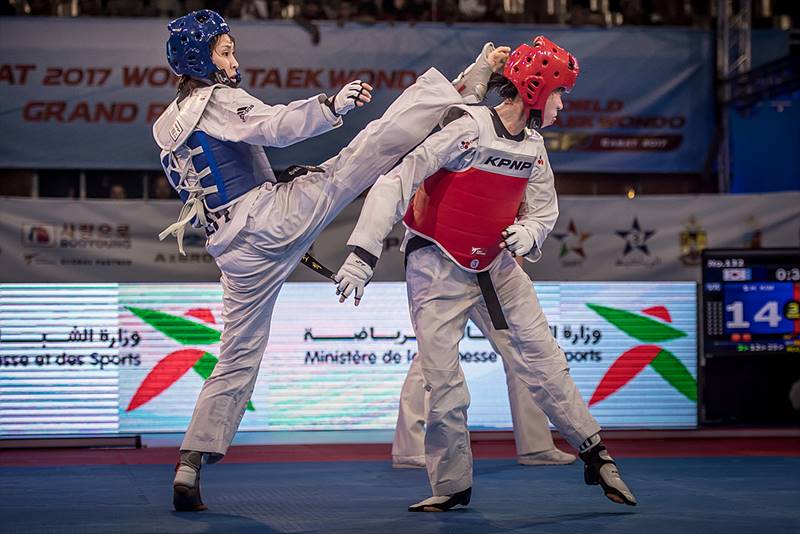 The final of the Female -49kg category saw So-hui Kim of Korea take on Thi Kim Tuyen Truong of Vietnam. Kim seized an early two-point lead with a body kick, then another. The Vietnamese put the pressure on, but Kim is a masterly counter fighter, and ended the round 7-0 up. The Korean went to 8-0 after Truong tried to land a head kick from the clinch, but ended up falling; Kim kept her cool and her feet. Defying repeated attacks from Truong, Kim maintained the distance and ended the second round 8-0 up. In the third, Kim landed a head kick, but her game corroded slightly under pressure as Truong finally found the range. Even so, the point gap and the skill gap were too great: Kim took gold with a convincing 14-5 victory, leaving Truong with silver.

Bronzes were won by Jae-young Sim of Korea and Rukiye Yildirim of Turkey. 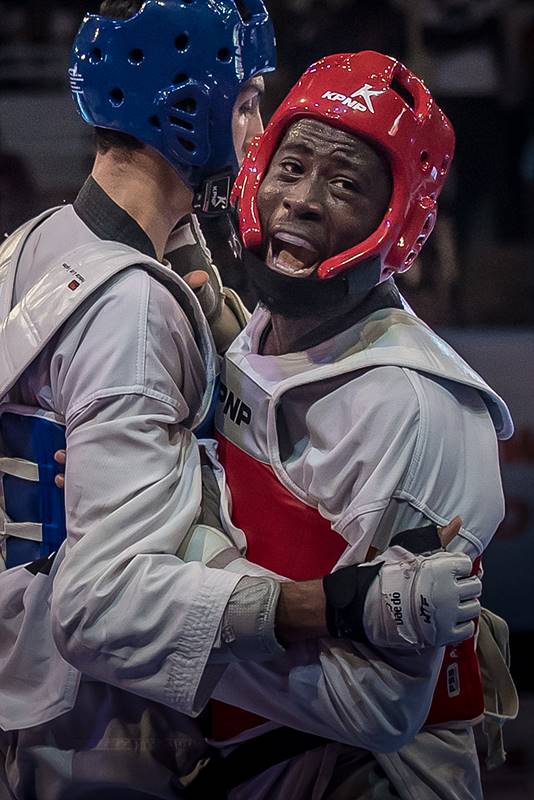 The final of the Male -80kg category is what the crowd had been waiting for: It is perhaps the most exciting category in the game. It saw Seif Eissa of Egypt do battle with Rio Olympic gold medalist and African taekwondo hero Cheick Sallah Cisse of Cote d’Ivoire, who had been fighting hard and entertainingly all day. The Cote d’Ivorian had vocal support from the crowd, but the bout started at a slow pace with the two fighters probing each other and a fair bit of eyeball-to-eyeball psychological warfare taking place. It ended 0-0. In the second, the Egyptian scored first to the body, going 2-0 up, but then losing a point for grabbing, 2-1. Finally, Cisse unleashed his attack, raising his score to 3-2 with a body kick. In the third, just one point separated the fighters. Cisse asserted his dominance, going up to 5-2 and playing a very physical game of pushing that seemed designed to intimidate the taller, but slimmer, Egyptian. As the clock counted down, Eissa came alive, attacking across the mats with a flying side kick – a common technique in action movies but a rare kick in live competition - before landing a crescent kick to Cisse’s head in the last 20 seconds, and evening the score, briefly, to 5-5. In the final seconds, the action escalated to close, fast and furious, with both men connecting. It ended 6-7 with a gold medal for the popular Olympic champ from Cote d’Ivoire, and a well-deserved silver for Eissa.

.
Milad Beigi Harchegani of Azerbaijan and Rene Lizarraga of Mexico had to be satisfied with bronzes.

The victors in each category won USD5,000 in prize money; the silver medalists got USD3,000; and the two bronze medalists took home USD1,000 each. The winners were also guaranteed a place in the upcoming “Champion of Champions” Grand Slam series, to be contested in December and January, where USD100,000 of prize money will be up for grabs.

The invitational championship, the second of the 4-series Grand Prix 2017, brought together 221 athletes and 48 international referees, representing 55 countries. Invitations were based on the August World Taekwondo Olympic Rankings.

The final day of the championships takes place tomorrow at the Complexe Sportif Prince Moulay Abdellah tomorrow with the Female -57kg and the Male -68kg being contested. 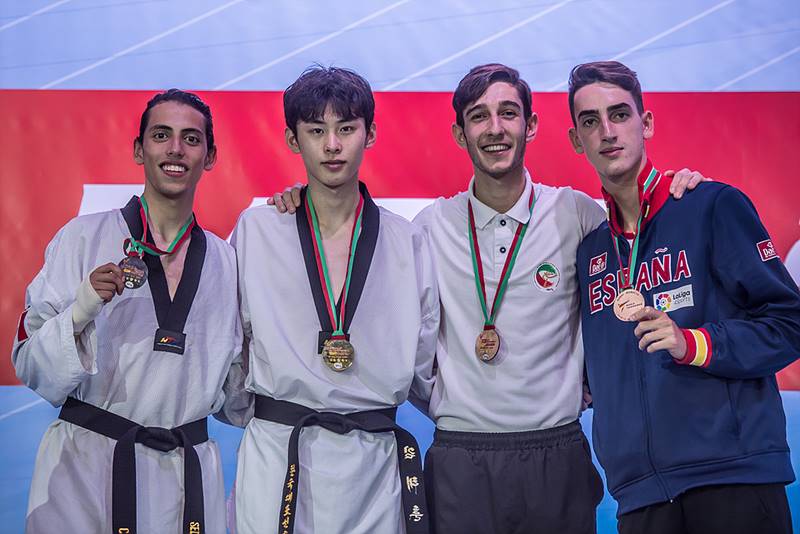 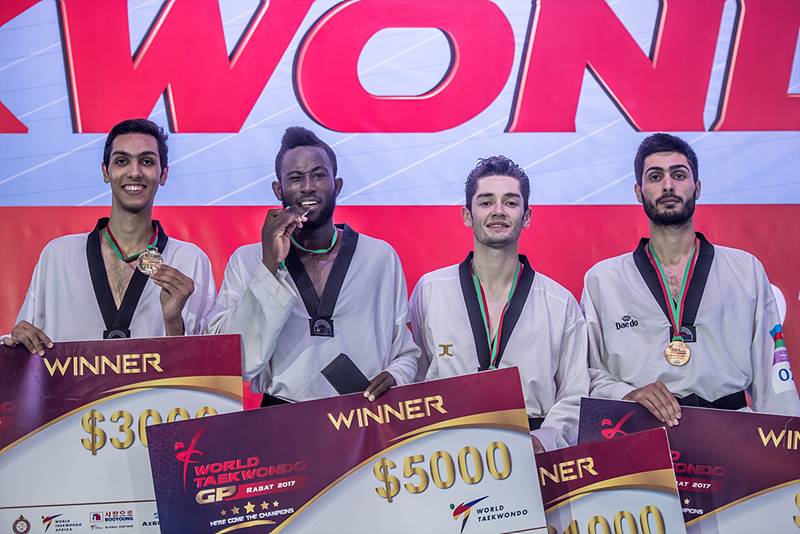