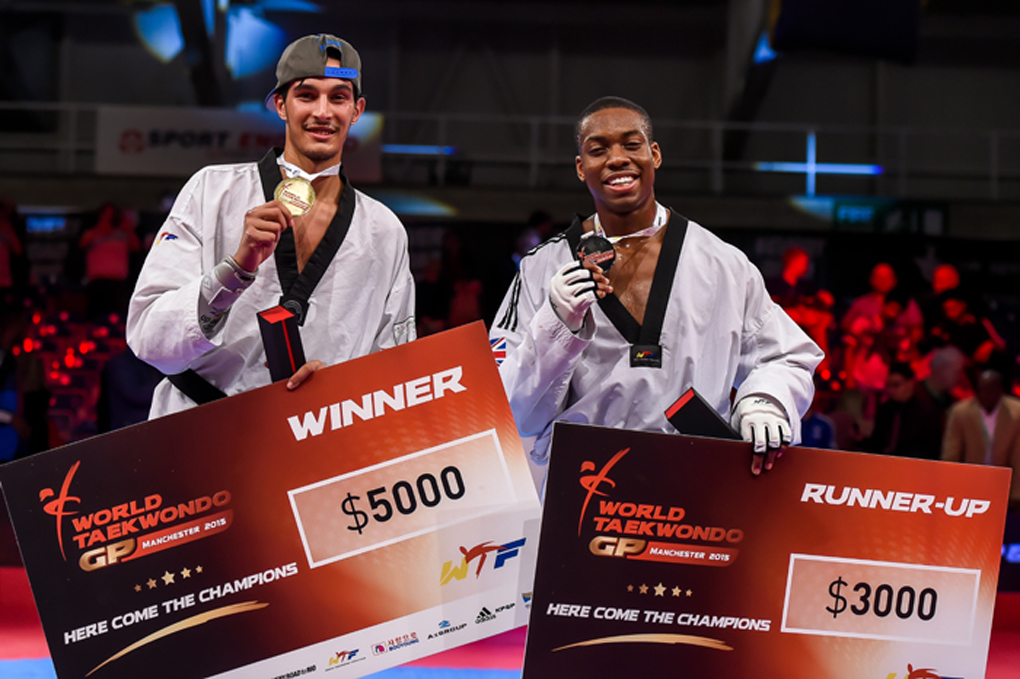 In the finals of the female –49kg division, China’s Wu Jingyu - who WTF TV Commentator Mike McKenzie dubbed “pound for pound the most stylish female athlete out there” - squared off with Chanatip Sonkham of Thailand.

Round 1 started with both girls foot fencing with range-finding kicks. After a flurry, the Thai coach requested a video replay for a head kick; it was denied. Wu drew first blood with a jump spin back kick to the body, followed shortly afterwards with a body kick, then a round kick to the head delivered another three points. Round 1 ended 7-0 to Wu.

Round 2 started with the Thai applying forward pressure and Wu backpedaling around the mats – but scoring consistently on Sonkham while relying on her footwork to carry her out of the Thai’s range. Picking off her opponent with sniper-like accuracy, Wu took the board to 8-0, 9-0, 10-0, 11-0 and finally 12-0. There was no third round: The contest finished on point difference.

Her display of utter superiority over world-class opposition makes the Chinese girl look unassailable; she must surely be an odds-on favorite for her third Olympic gold in Rio in 2016.

Tijana Bogdanovic of Serbia and Azerbaijan’s Patimat Abakarova went home with bronzes in the same category.

The finals of the men’s -80kg pitted host Great Britain’s Lutalo Muhammad against Oussama Oueslati of Tunisia. Muhammad had earlier overcome perennial favorite and world-ranked number one Mahdi Khodabakhshi, who injured his knee in their match, while Oueslati had defeated African favorite Cheick Sallah Cisse of Cote d’Ivoire in an action-packed, but penalty laden match.

Round 1 opened in cagey style with both lads adopting similar rear-weighted, backward-leaning stances. In an exchange of turning kicks, Oueslati scored first, then again with a whippy front-leg body kick. The round ended 2-0 to the Tunisian.

In Round 2, Muhammad tried to land his ax kick, but was unable to overcome the height disadvantage. Fighting forward, he forced his opponent out of the area, but the Tunisian, after slowly regaining his feet, accelerated the action and extended his lead to 3-0, 4-0 then 5-0. Finally, Muhammad - a master of combination attacks –found his distance and seized three points in the last seconds of the round with a series of round kicks. The score ended 6-3.

In the final round, Muhammad visited the mats while the score went up to 7-3. The Briton uncorked a series of spinning attacks and raised his score to 5-8, but the Tunisian landed a head kick. Muhammad attacked forward and picked up a penalty but the Tunisian scored with yet another head kick. The final score was 16-6, and victory for Oueslati.

Mahdi Khodabakhshi of Iran and Cheick Sallah Cisse of Cote d’Ivoire both won bronzes in the same weight division.

The last day’s finals of the Grand Prix were attended by the Lord Mayor of Manchester, Paul Murphy, in full ceremonial regalia. “It’s marvelous! Manchester is showing the way in terms of world sports,” Murphy said of the event. “And a great result for Great Britain.”