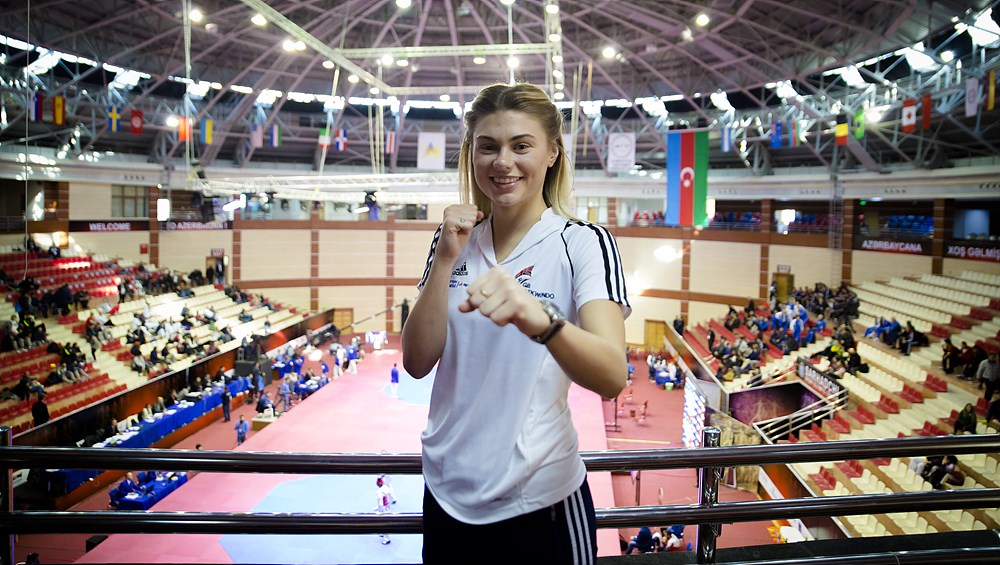 BAKU, Azerbaijan (December 11, 2016) – When the smoke cleared at the just-ended 2016 World Taekwondo Grand-Prix Final in Baku, Azerbaijan, the national team standing at the top of the medal rankings was Great Britain. That result was thanks to the efforts of three woman warriors: gold medal winners Jade “The Headhunter” Jones, Bianca “Queen Bee” Walkden and Charlie Maddock.

Yes, Charlie Maddock. Her name is not as well-known as double Olympic gold medalist Jones or World Champion and Olympic bronze medalist Walkden, but her lack of recognition and experience did not stop the up-and-coming Maddock from beating the 2016 Rio Olympic champion in the female -49kg category, Korea’s So-hui Kim.

The Kim-Maddock battle on Day 1 of the Grand-Prix proved to be a clash not just of fighters, but also of fighting styles. Kim is a master counter-kicker, with a wily tactical game and excellent footwork. Maddock, on the other hand, is an aggressive fighter, with a never-step-back, take-no-prisoners style.

As the buzzer sounded for the first round, Maddock – totally unintimidated by Kim’s pedigree – surged out, fighting strongly and immediately pressuring her opponent. The Korean fought back gamely; she appeared to have decided that she would not let Maddock play her customary steamroller game. It was a lively round – but ended without a score. The second round kicked off with Maddock continuing to apply forward pressure. Kim reverted to her normal, evasive style, leaving Maddock to expend energy firing multiple kicks. But it was Kim, fighting more economically, who looked the more dangerous player: She failed to score by a whisker with two head shots. Round 2 ended scoreless.

Round 3 continued in the same vein with plenty of kicking, but no contact and no points. Surely, at this stage, Kim’s superior experience and ring craft would pay off?

Not necessarily. With just 12 seconds on the clock and the board empty, Maddock riposted a Kim attack with a reverse spinning turning kick to the head – then-swung her leg back into a round kick to the head, without putting her foot down: An extraordinary display of leg control, brilliant timing and spectacular technique. The scoreboard lit up, and the British girl was head 4-0.

In the final seconds Kim, a cagey, tactical fighter, was powerless to respond: Her arsenal did not include the high-scoring techniques necessary to turn things round. The match ended with a well-deserved 4-0 win for the British girl who is clearly charmed in Azerbaijan – her previous big win had been a gold medal at the European Games in Baku in 2015.

Speaking the day after her win at the Grand-Prix Final, the 21-year-old from the English town of Stoke-on-Trent proved pretty and petite, but fizzing with life: Her nickname is “pocket rocket” – a reference to small size and high energy.

Combative energy is in Maddock’s DNA. She got her start in combat sports at the tender age of five at home: Her parents had met through martial arts, and her father was a kickboxing instructor. “I kind of fell in love with it,” she said.  Years later, sensing his daughter’s potential, her father put her name forward for “Fighting Chance” – GB Taekwondo’s talent scouting program.

“Fighting Chance” plucks combat sports athletes from fields including taekwondo and kickboxing to see if they have what it takes to join the grueling, elite training program at Great Britain’s medal factory – the National Taekwondo  Center in Manchester.

That application was three years ago: Maddock was invited to join the elite and has not looked back since. Naturally, her parents were delighted to hear the news of her victory in Baku. “Dad and Mum were buzzing, they were over the moon!” Maddock said. “Mum was screaming down the phone – it was a nice Christmas present!” 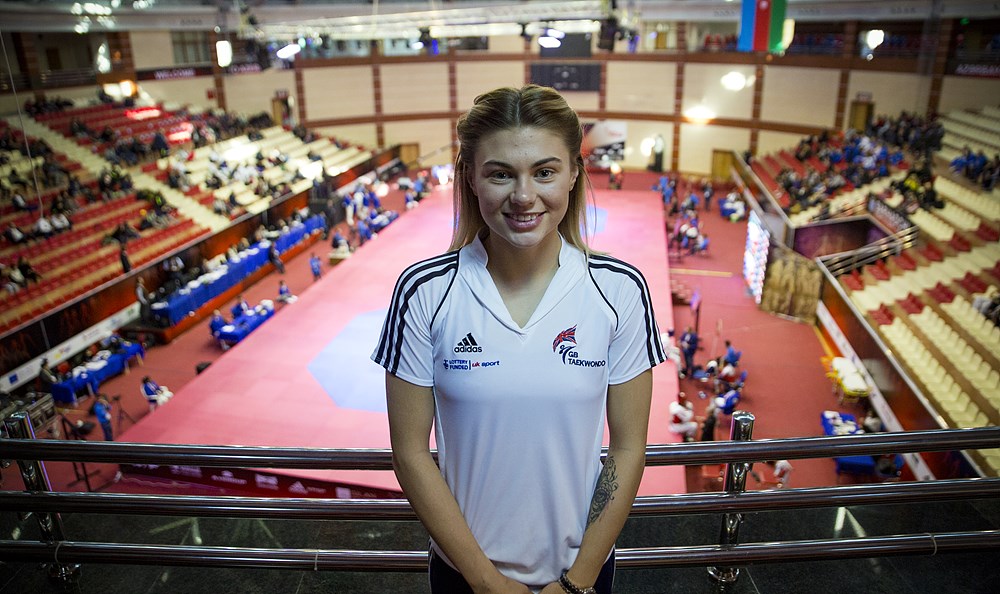 Maddock’s favorite techniques are her “check kick” – a stabbing side kick – and her punch. “Coming from kickboxing, I like to punch,” she said.  She also favors head shots, but the game-winning blow she deployed against Kim in Baku is a relatively new weapon in her arsenal. “The reverse turning kick is a funny one,” she said. “I have been working on it for ages, so it was nice to get it in the last seconds.”

As a player, she considers aggression as one of her strongest qualities. “I like to press the match down and wear the opponent down to the point where she thinks she has no other option” she said. “I am really strong and I am quite fast as well: Put the two together and they work really well.”

However, she recognizes that now, in premium-level competition, aggression is not enough: She has to add a layer of sophistication to her game. “I am working on being manipulative, on controlling distance and being calm and composed,” she said. “Being aggressive is good – but not all the time.”

Perhaps surprisingly, there is no boyfriend in her life – training does not leave much time for romantic distractions – and she lists her ex-taekwondo hobbies only as “shopping.” Regarding future plans, her main aim is Tokyo 2020. In the shorter term, she hopes to qualify for the World Taekwondo Championships in Muju 2017. On the way to Muju, she will be taking part in some smaller tournaments in the run up to the summer.

She thanks her sponsor, Phil Wettem Say Scaffolding – “Without his sponsorship, some things would not have been achievable” –  and the staff at Manchester, as well as her parents for bringing her up in combat sports. She also pays tribute to the golden girls of British taekwondo.

“To be honest, I never knew what the sport entailed at first, but when I came to the first phase of ‘Fighting Chance’ then I saw that these girls are pretty good!” she said. “I wanted to achieve what Jade and Bianca have achieved.”

Having joined GB Taekwondo’s two national heroines on the podium in Baku, she may be on her way to doing exactly that.