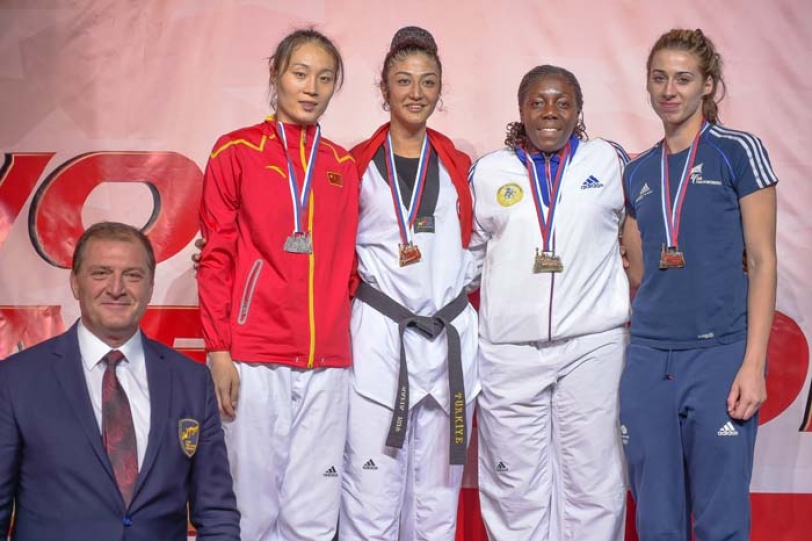 MOSCOW, Russia (August 16, 2015) - Every sport needs a pipeline of up-and-coming fighters and in this sense, taekwondo is well served.

The first thing that strikes you about Kus is her weapons-grade physical presence. Tall, lithe, leggy and athletic, Kus is nicknamed “The Amazon” and it is easy to see why. With her pale features bookmarked by long, black tresses, with her chiseled bone structure and her dark, hawk-like eyes, she showcases the fierce beauty of the mythical female warriors of the Black Sea.

If she were not stalking opponents on the competition mats, she could be turning heads on the runways of Paris and Milan – and indeed, when she came into the media room at the 2015 Moscow Grand Prix Series 1on August 15 for the photo session to accompany this article, male media professionals were lining up to have their photo taken alongside her.

It was her physique that even at age 10, led her to taekwondo – or  rather, that led taekwondo to her.  A coach at a dojang in her home town of Adana spotted her. “He saw that I looked tall and strong so he invited me to his club,” she said. “That was the beginning.”

Her favored technique is the front-leg turning kick which, she reckons, is well catered for by the current rules and PSS. In terms of her strengths, she mused: “I know my physical advantage and my power: I am tall and I have long legs.”

Yet “The Amazon” was in no way awed by the world’s number two.

“All my opponents, whoever I fight, is only an opponent,” Kus said. “I cannot see the nation, I cannot see the face, I only fight to win: That is all my focus.” Fighting with poise and confidence throughout the match, she dispatched Walkden in golden point. That victory put her through to the finals against China’s Li Donghua, the world-ranked number 12.

Action got underway as soon as the bell went, with Kus drawing first blood with a front-leg turning kick to the body. Li returned fire with an arcing ax kick to the head of Kus, then, in a flurry, Li went down with Kus falling on top of her. A medic was called as Li, clearly in pain, appearing to have suffered a twisted ankle. However, after some swift manipulation, she got back on her feet.

But now “The Amazon” was looking to take swift advantage. Both athletes showed a high work rate as they fought to control the center of the ring, with Kus piling on the pressure.  By the final round, there was just a one-point difference - but Kus had now found her distance. She mercilessly extended her lead and Li’s game started to disintegrate. The match ended with a convincing 12-5 victory for the Turk.

A clearly delighted Kus was looking to the future, particularly to  the September Grand Prix which will be held on the home ground of this Black Sea warrior.  “Inshallah, I will win in Samsun!” she said in the post-match TV interview.

Like every athlete fighting in the 2015 Grand Prix Series, Kus’ longer-term sights are set on Rio. “My major target is the Olympics and I want to get golds in Samsun and Manchester to get into the top eight to qualify for the Grand Prix Final in Mexico and try to make the Olympics,” she said.

Professionally, she is well positioned to get there. The Turkish Taekwondo Federation covers all her training camp, travel and accommodation expenses; it also pays a cash bonus for medals. In her down time, Kus continues to play volleyball and is a keen salsa dancer.

She is currently a student in the Sports Department of the University of Cukurov, and in her post-competitive career plans to teach sports. However, given that she is just started her life as a senior, that career could be a long one: “The Amazon” reckons her cut-off date for Olympic competition is 2024.