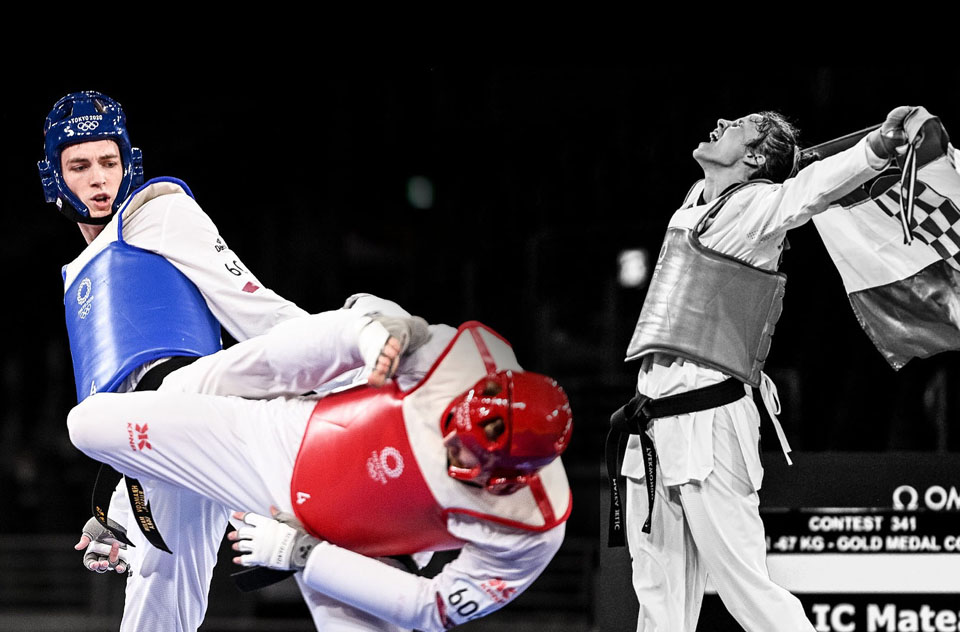 CHIBA, Japan (July 26, 2021) – Matea Jelic of Croatia and Maksim Khramtcov of ROC captured the two golds on offer on Day 3 of the Taekwondo Competition, in the W-67kg and M-80kg categories.

For both athletes they made history as the first athletes from their countries to have won gold in Olympic Taekwondo.

Some stability returned to the competition at the Makuhari Messe Hall in Chiba, a suburb of Tokyo after the shock surprises of Day 2. Yesterday, both golds were won by teenagers who were both new entrants to the senior division, but all fighters in the finals today were well established names on the circuit.

Even so, there had been some shock exits in the earlier rounds.

Defending Olympic gold medalist in the M-80kg category, Cheick Sallah Cisse of Cote d’Ivoire, went out in his first fight. His team mate and Rio bronze medalist, Ruth Gbagbi, a favorite for gold in Tokyo, lost her chance for a place in the final after losing a scorching semi-final match against Team GB’s Lauren Williams, but went through to the bronze matches.

The final pitted Croatia’s Jelic against GB’s Williams. This would be a clash of styles: the tactical craft of Jelic against the all-out assault of Williams.

The first round started with the Croatian clearly working to a game plan: fighting forward against the always offensive Williams, putting her on the back foot and picking up the first point courtesy of a fall from the Brit. But Williams returned fire to the head, and the score seesawed.  Round 1 ended 5-4 to the Brit.

As the second round got going, both landed head kicks in swift succession, and an IVR from Croatia was rejected. Jelic landed an out-of-nowhere head kick to take the lead 10-9, but Williams equalized almost immediately with a punch, and Round 2 ended 10-10.

The final rounded stared messily as both athletes, fighting hard, charged into each other and clinched; the score rose to 13-13. It was rough stuff: Jelic visited the mats on the business end of a Williams side kick. An IVR request from the British coach was rejected. Thirteen seconds remained on the clock, but Williams was three points ahead as play resumed.

Jelic timed her last-second offensive to perfection. The Croat landed a head kick - then another - that dropped Williams to the mats. An unbelieving Williams surged forward in the last three seconds in a desperate counterattack - but it was too late.

The match ended 25-22, with the gold for Jelic, and silver – the second consecutive silver for GB in this competition – for Williams.

Bronzes were won by Cote d’Ivoire’s Gbagbi and Hedaya Wahab of Egypt. Coincidentally, both fighters had previously won bronzes in Rio (albeit, the Egyptian had been fighting in a different weight category).

Jordan’s Saleh Elsharabaty faced ROC’s Maksim Khramtcov in the final of this popular category. This, too, would be a clash of styles: the technically brilliant Jordanian against the unorthodox and highly dexterous man from ROC.

As Round 1 got underway, both looked well matched in physique and height. Battle commenced with both fighters duelling with long-range head kicks in the center of the mats – good, clean play.  The ROC fighter landed the first kick to the trunk for two, then switched up to the head to go five points up.

All the time, the Jordanian had very vocal support from the considerable contingent of Arab athletes and officials in the venue, but the first round ended 5-0 to Khramtcov.

In the second round, the ROC player pressed his attack putting Elsharabaty on the back leg.  As the round counted down, the Jordanian, despite his high work rate, had not put a point on the board, and looked frustrated. Khramtcov keep the pressure on, keeping the Jordanian off balance; only a fall from the ROC fighter granted Elsharabaty his first point. Round 2 ended 7-1.

In Round 3, Khramtcov kept his leg flying – then the Jordanian finally found the range, landing a spinning heal kick to the head and the score was closer – 6-8.  Suddenly, there was everything to play for, but the move only shoved Khramtcov into yet higher gear. He landed his from-in-close head kick and then lifted the board higher and higher, his radar fully locked on and his leg striking from every angle.

Even as he raised his score to 14, then 16, and onward, the ROC fighter did not relax the pressure until the very final seconds when a broad grin split Khramtcov’s face – and the battle ended 20-9.

Both fighters laughed and embraced at the conclusion of play - clearly there was no ill will.

And indeed, Elsharabaty had much to laugh about. He had given Jordan only its second ever Olympic medal in any discipline, after his trailblazing predecessor Ahmad Abughaush had broken the ice with gold in Rio.

The fourth and last day of the competition at the Makuhari Messe Hall in Chiba, a suburb of Tokyo, takes place tomorrow. 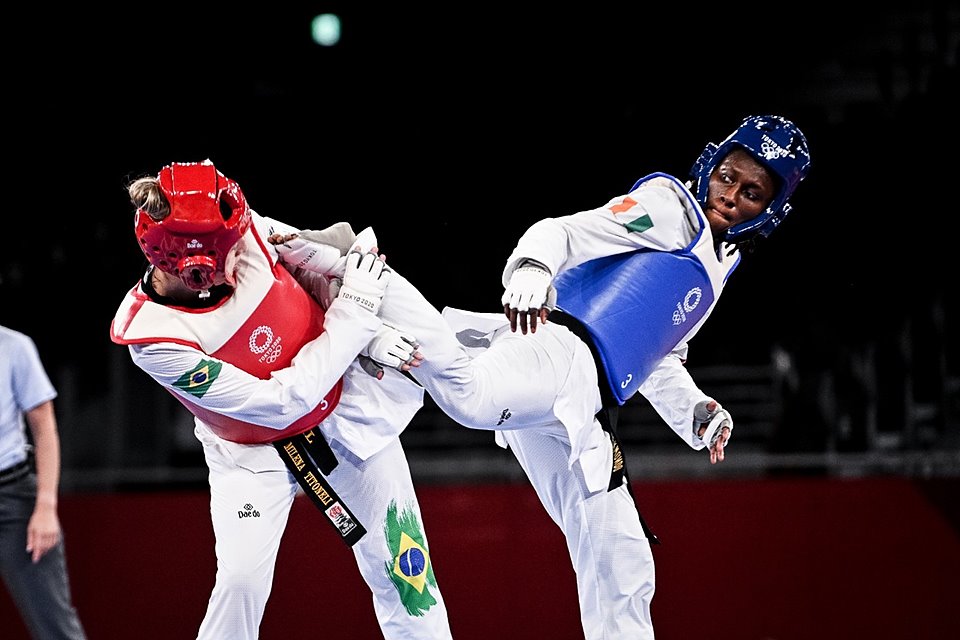 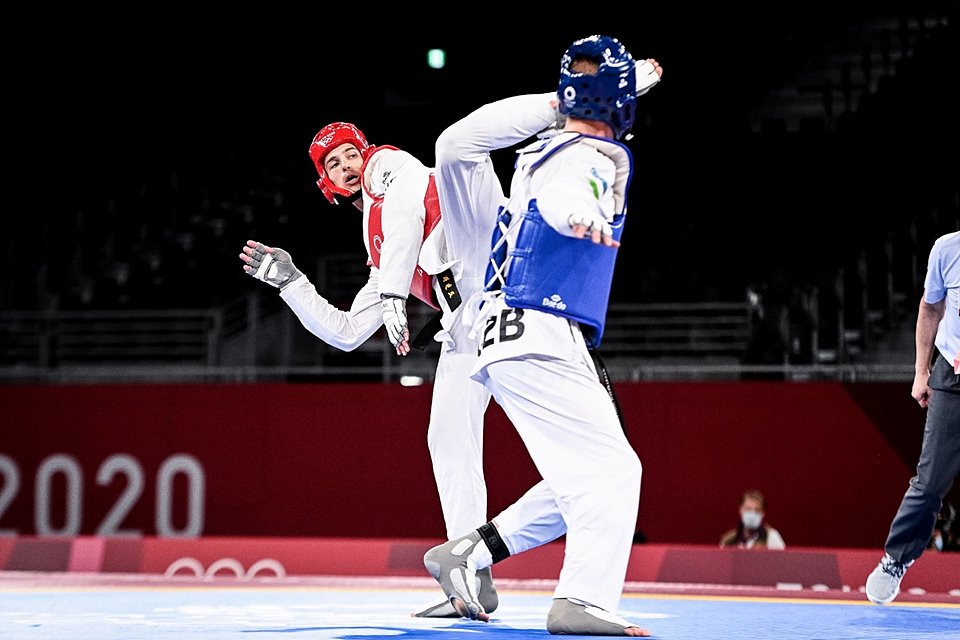 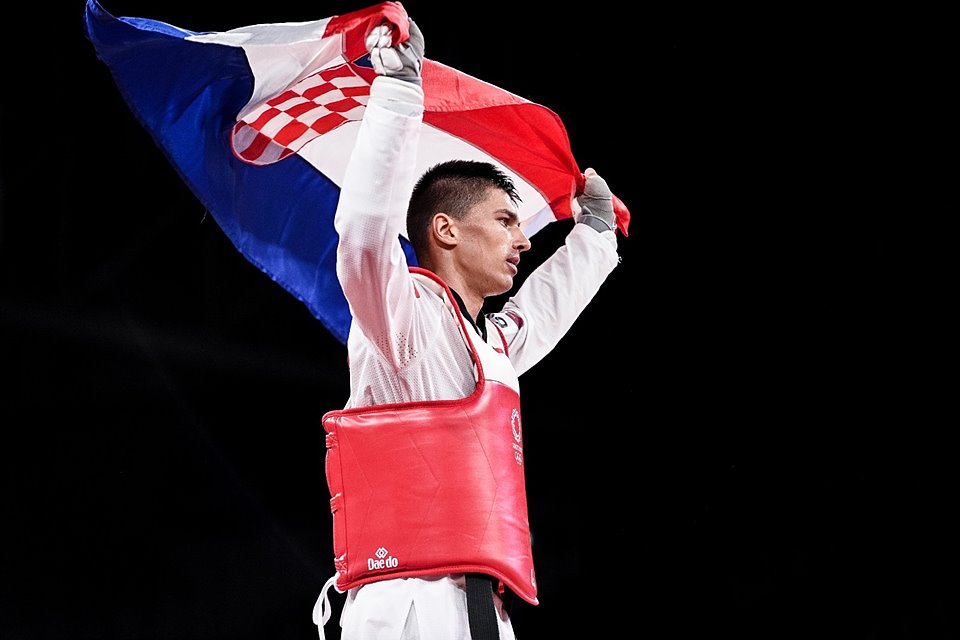 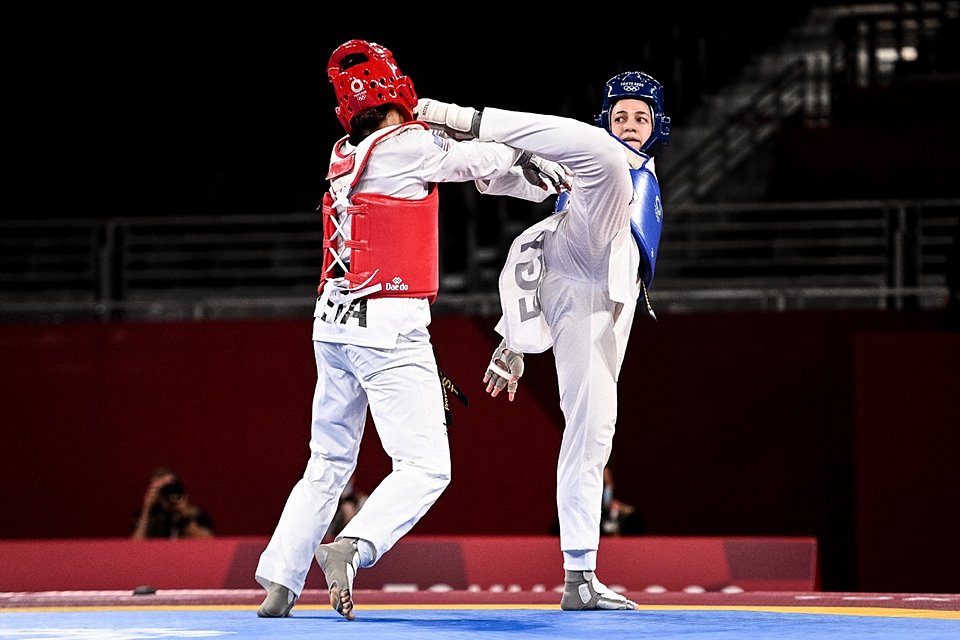 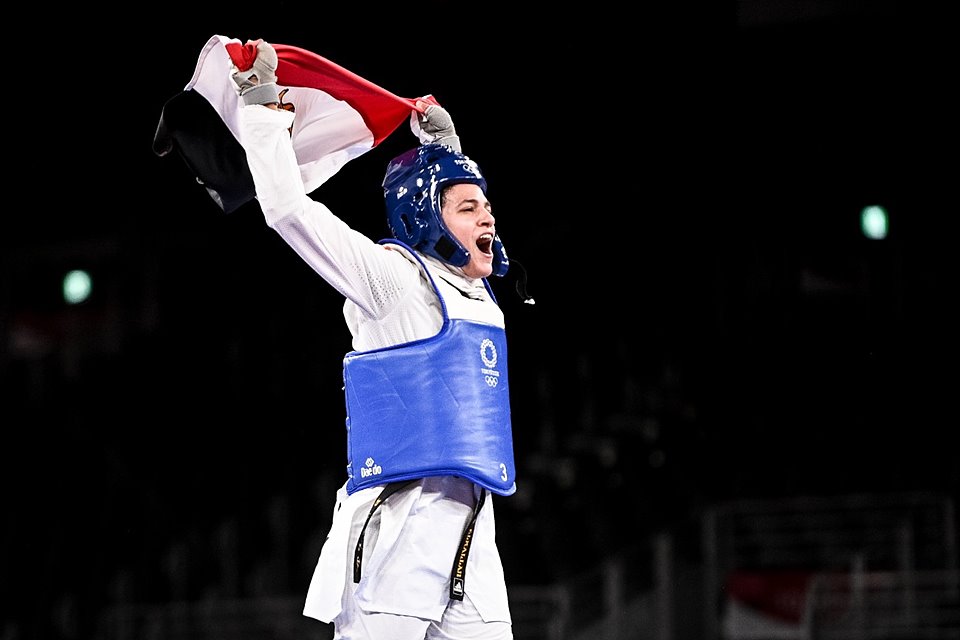 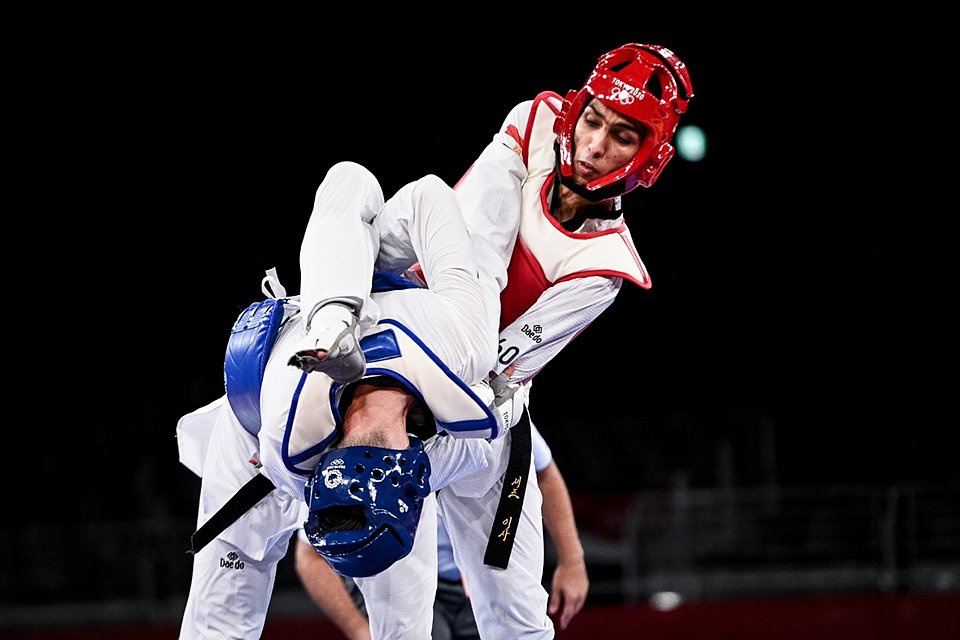 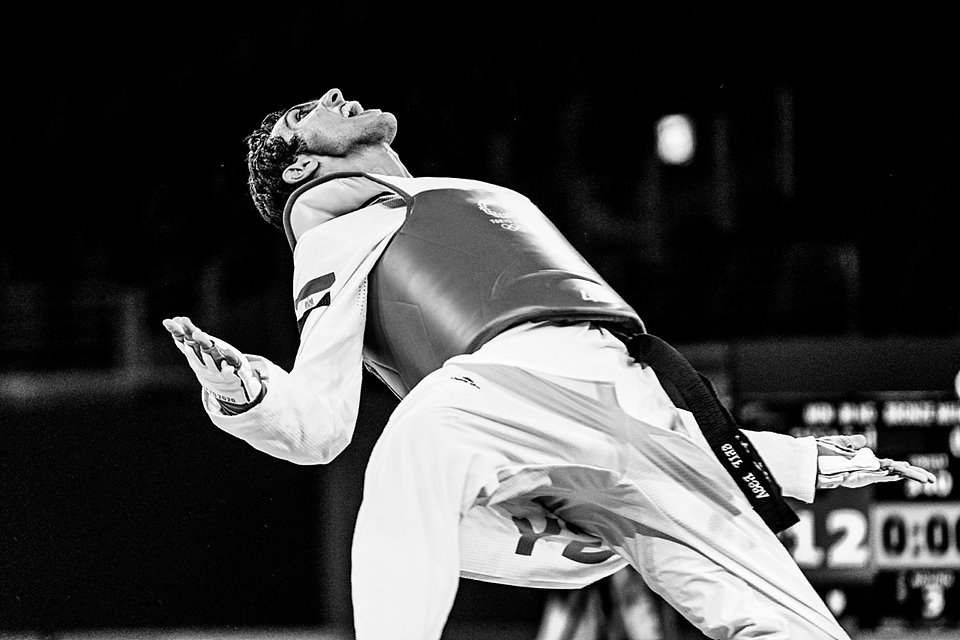 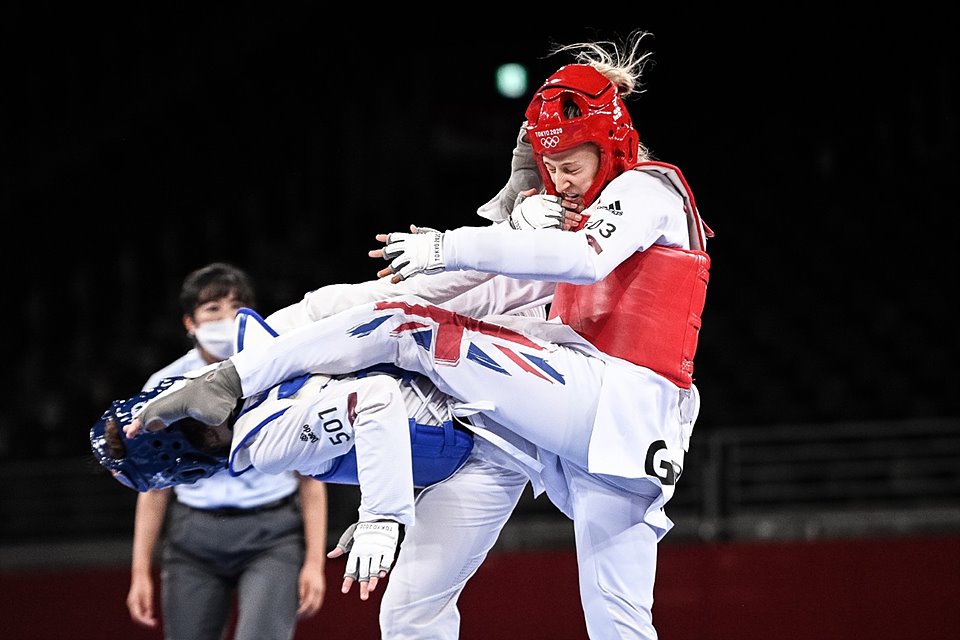 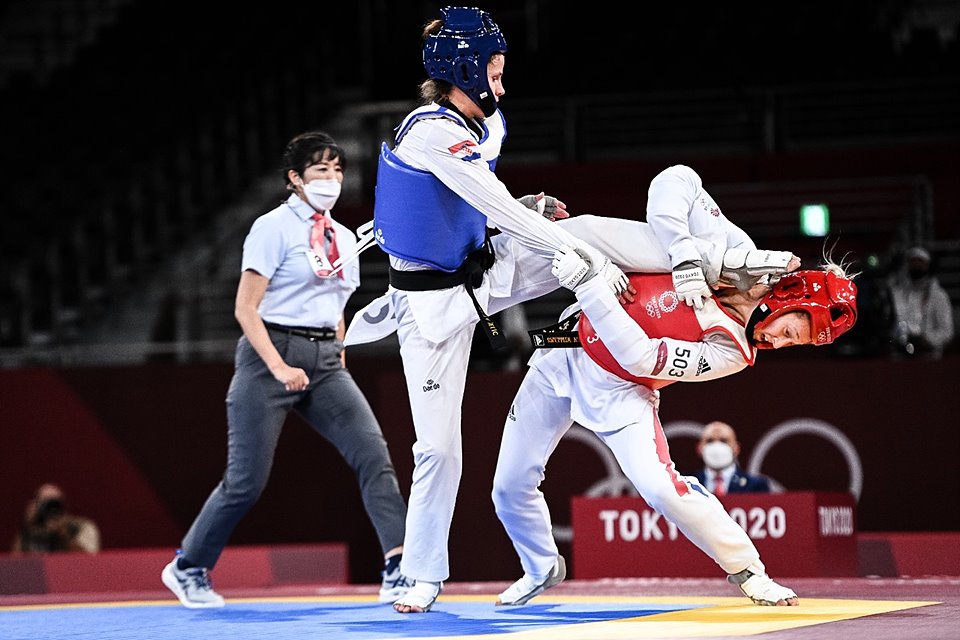 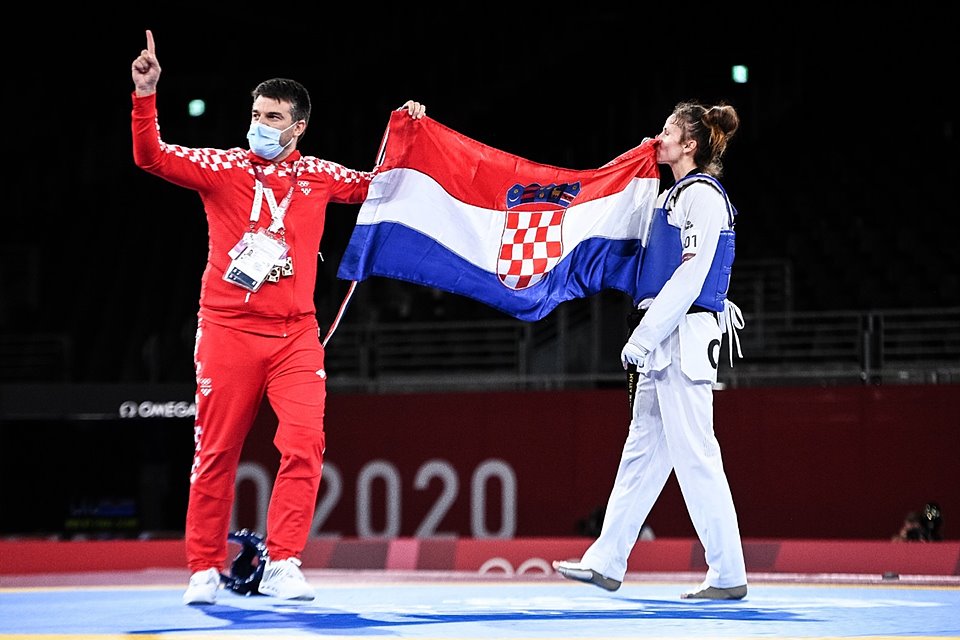 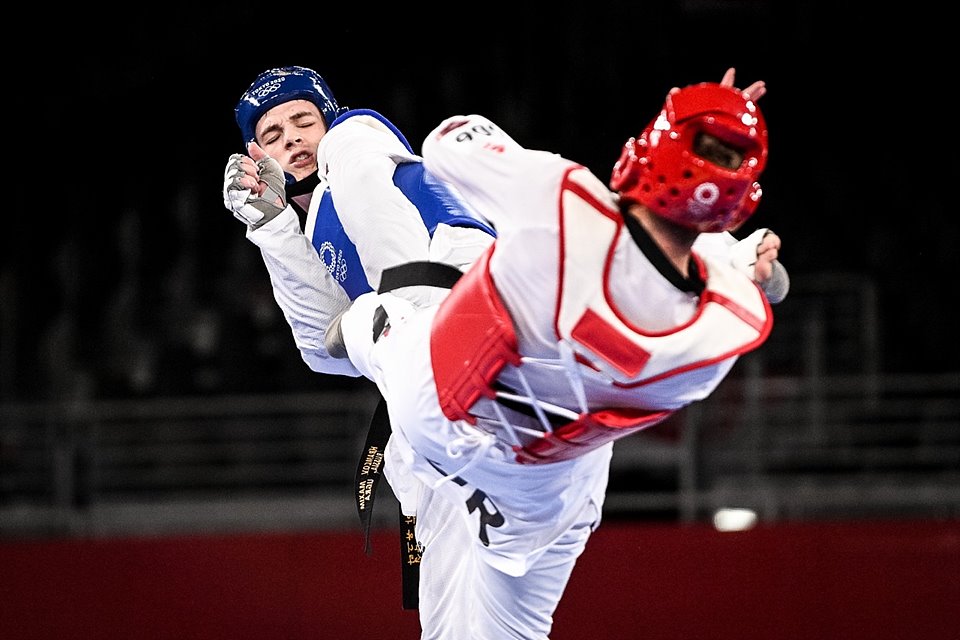 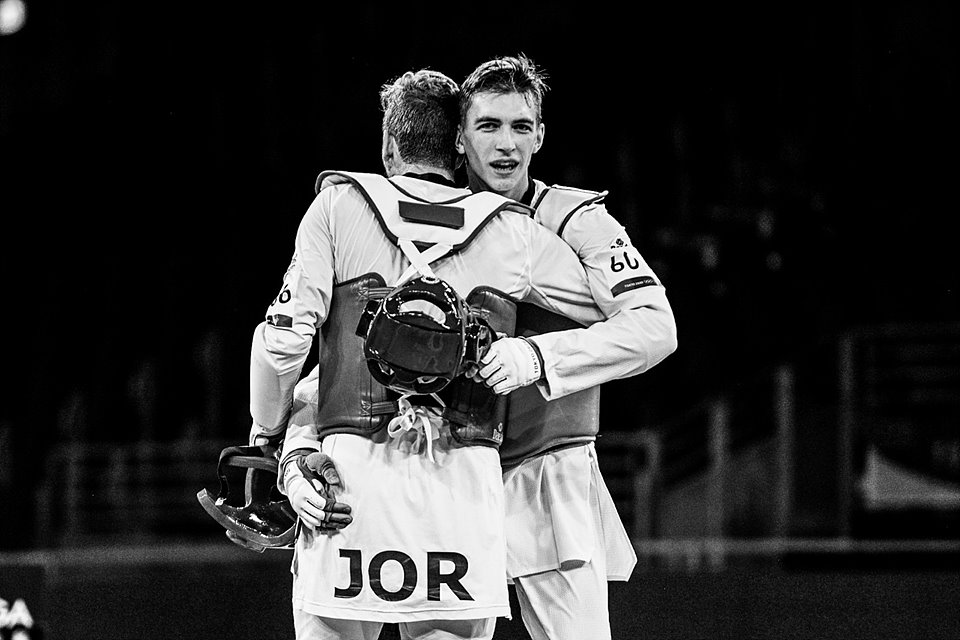 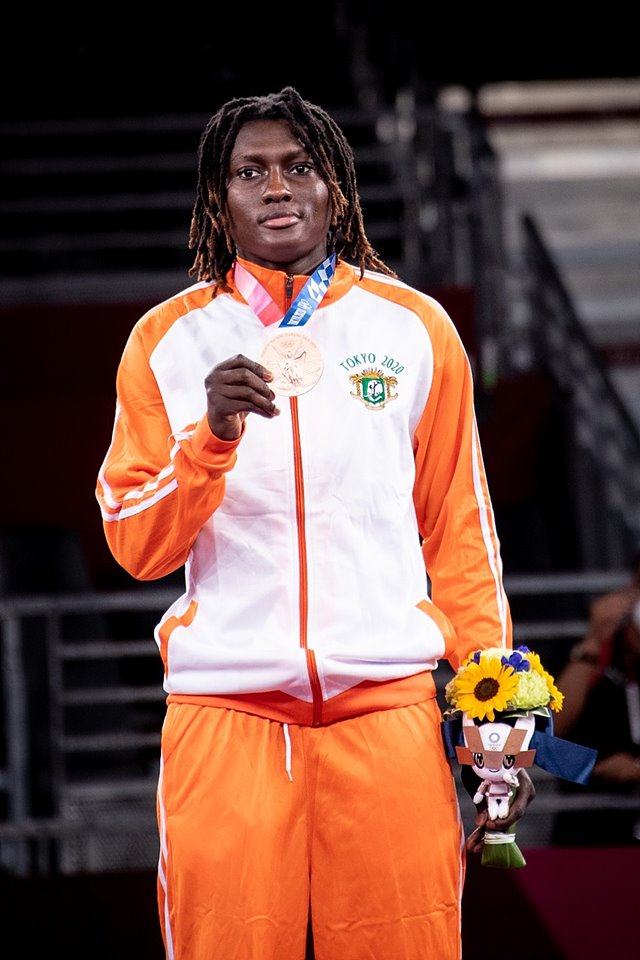