CHIBA, Japan (15 September 2019) - The third and final day of the Chiba Grand Prix saw golds go to Thailand and Azerbaijan as the Women’s -49kg and Men’s -80kg categories were contested.

The final of the former category delivered a classic rivalry, while the final of the latter gifted the crowd with what must surely rank as one of the finest taekwondo battles of all time - an instant classic for the sport.

The final pitted Panipak Wongpattanakit of Thailand against Jingyu “Superkicker” Wu of China. The latter, a two-time Olympic gold medalist, is making a triumphant return to elite-level taekwondo after giving birth to a daughter.

These two have clashed any times before – the last time at the Worlds in Manchester, where the Thai emerged with gold, Wu with silver. Wongpattanakit is tall and leggy; Wu is short but with versatile technique and a brilliant tactical radar.

The two started off slowly before the Thai scored with a body kick and Wu returned fire with a clean head shot that - unluckily - did not score.  Wu went onto the offensve; Wong kept cool. From the clinch, the Thai landed a punch, and Wu attempted another head shot that fell short. Round 1 ended 3-0 to Wongpattanakit.

In the second, Wu jabbed forward and forced Wongpattanakit back, but not off the mats. Then the score soared as Wongpattanakit landed two head kicks, though a fall gave Wu a point. The board stood at 9-1 to the Thai.  A penalty gave Wu another point, but it was successfully appealed. The round ended 9-1 to Wongpattanakit.

Wu now had a real task ahead. Again she thrust forward, looking faster and more dangerous than Wongpattanakit, but was not breaking down the latter’s defences, her ax kick falling short by a hair’s breadth and her front-leg kick impacting but not scoring. A fall from the Thai gave Wu her second point but the match ended 9-2 to Wongpattanakit.

It had been a professional tactical performance Wongpattanakit and an unlucky bout for Wu. Still, Grand Prix silver marks a landmark in her ongoing renaissance.

Jae-young Sim of Korea and Tijana Bogdanovic of Serbia took home the bronzes. 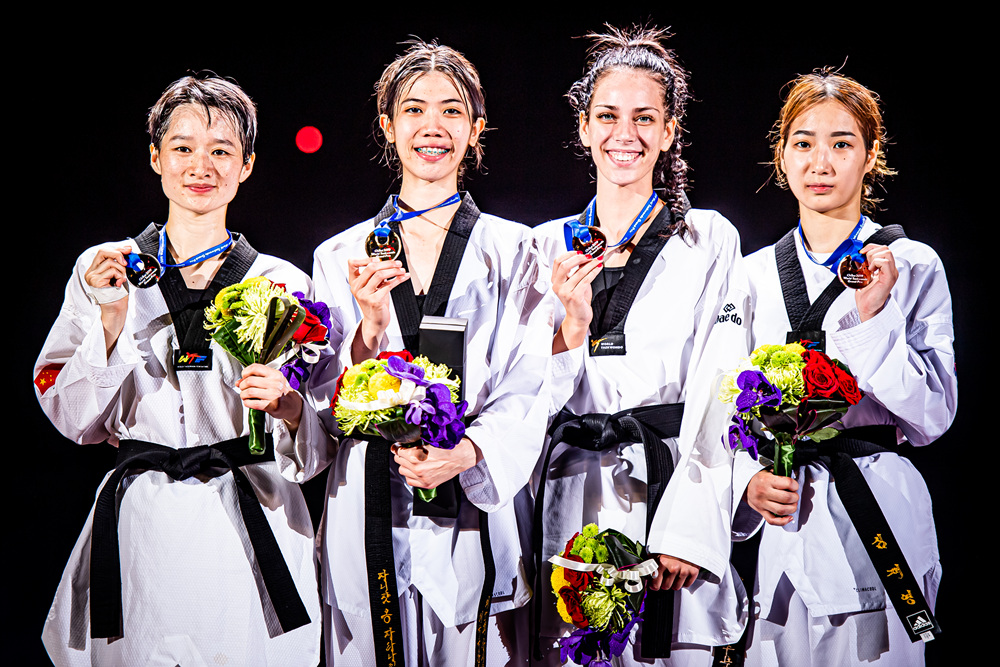 In the final of this super-competitive category, Maksim “Red Machine” Khramtcov of Russia took on Milad Beigi Harchegani of Azerbaijan.

This was a dream match. Both men are physically gifted, technically versatile  and hugely entertaining; the Azeri delivers flawless, beautiful technique, while the Russian is noted for his crafty and unorthodox style of play.

Would the bout deliver on its promise? It would – in spades.

Combat started at a torrid pace with both going to the clinch and the Russian drawing first blood with a body kick for two points. They briefly slowed down and the Azeri won a point through penalty. The impact of a power kick could be heard across the width of the arena as the Russian went 4-2 up. Then things turned torrid. Both athletes unleashed kicks on both the mid- and high line, and the board ended 10-10.

The furious pace was resumed in the second. Ax kicks flew and Beigi Harchegani Milad drew ahead 12-10 - then it shifted 13-12 to Khramtcov. The crowd gasped at the audible thwacks of kicks impacted torso protectors. The score seesawed and a picture-perfect head kick took Milad-Harchegani’s score to 17-13.

Both men were firing their entire arsenals: middle kicks, high kicks, spin kicks, clinch work. Incredibly, the Azeri landed a jump spinning heel kick- taekwondo’s most difficult kick, and a move that is largely restricted to demonstrations rather than matches -  to the Russian’s head, dropping Khramtcov. He got up and tried some jump spinning kicks off his own, but failed to connect. A superb round for the Azeri, who ended 23-13 up.

In Round 3 the Russian charged forward with a war cry, but the Azeri’s target radar was locked on and his score surged to 33-16. Khramtcov attempted to force him off the area, but Beigi Harchegani did not yield an inch. Punches, ax kicks and cut kicks were flying in furious action  and Khramtcov was penalised for grabbing Beigi Harchegani’s leg and punching. In the last 20 seconds the Russian pulled his score up with mulitple kicks from all angles, but the point gap was too wide.

The match - which resembled an action movie sequence more than a sporting bout - concluded 38-28 to Beigi Harchegani. Highly unusually, the conclusion was greeted with a standing ovation from ringside. 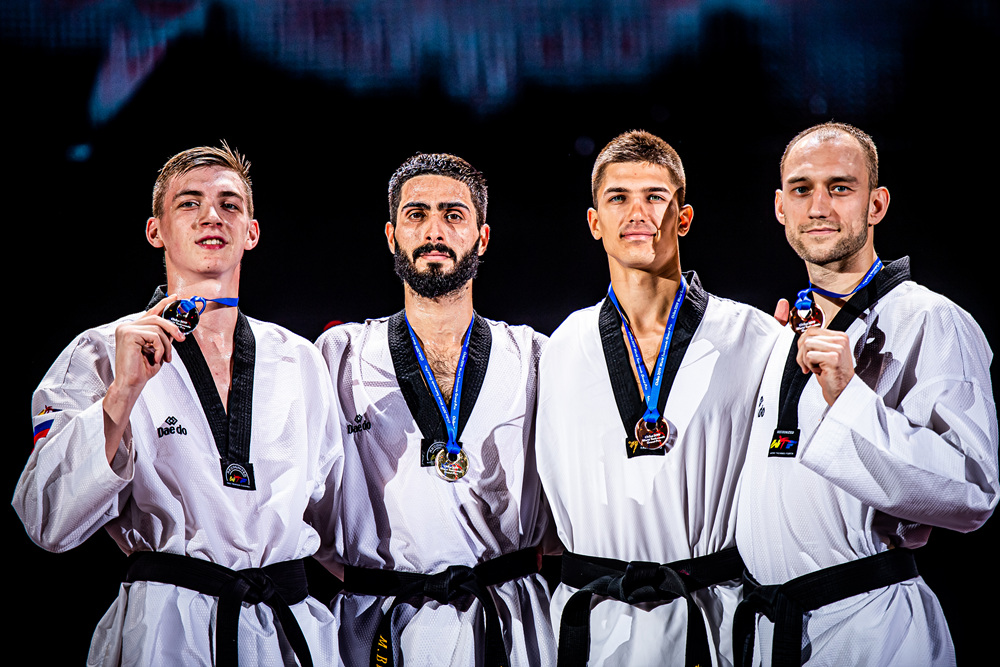