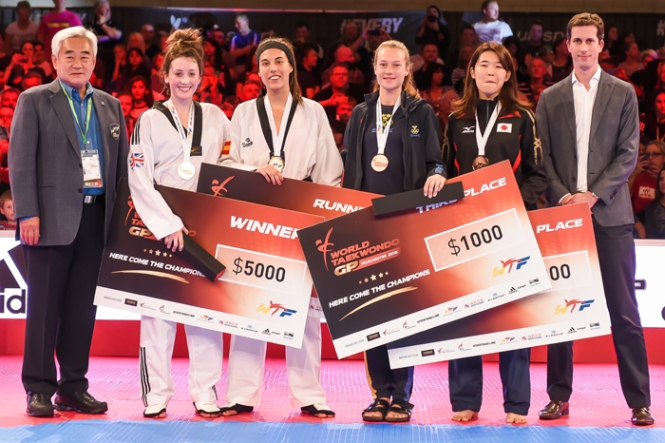 In the final match of the female -57kg category, Eva Calvo Gomez of Spain, the world number two, took on hometown favorite Jade Jones of Great Britain –the latest clash in one of taekwondo’s fiercest rivalries.

Action started at a fast pace in a back-and-forth contest with both athletes wielding front leg kicks, but with neither finding the range; the round ended 0-0.

At the start of Round 2, Calvo Gomez, backed onto the edge of the mats, connected first for a one-point lead. Then a round kick to Jones’ head put the Spanish athlete 4-0 up. Jones clawed back a single point with a strike to the torso, but things were looking grim for the hometown girl when, at the start of a remarkable series, Jones equalized with one of her patented round kicks to the head. Jones is known as a headhunter, but nobody expected her to land another one just seconds later and - as the crowd erupted into cheers - yet another, giving her a 10-4 lead at the end of the second.

Round 3 opened with heavy combat; both girls hit the deck in a tangle of limbs. After action restarted, a side kick to the Spanish girl’s torso gave Jones anther point, 11-4. Then yet another head shot took the board up to 14-4 as the audience stamped and roared. In the last 30 seconds, Calvo Gomez was looking desperate, as Jones called all the shots. The match ended with a decisive 14-4 victory for the 2012 Olympic gold medalist, who, having seized her second successive Grand Prix gold, is looking razor sharp.

Mayu Hamada of Japan and Nikita Glasnovic of Sweden went home with bronzes in the division.

There was another hometown favorite in the female +67kg final, as Jones’ roommate, Bianca “Queen Bee” Walkden of Great Britain, faced off against Shuyin Zheng of China. Round 1 started with Walkden looking livelier, but with the taller Zheng dominating center ring. Both girls felt each other out with probing kicks; the round ended 0-0. The second started with the Chinese girl looking busier and Walkden looked pained after a leg clash.  Zheng drew first blood with a body kick, ending Round 2 one point up.

Round 3 started with a higher work rate from both fighters but this time it was Walkden who was pressuring Zheng onto the back foot and onto the edge of the area.  With just over 30 seconds on the clock, Walkden connected with a body kick, equalizing to 1-1. The crowd stamped in the stands, creating a rolling thunder as the third ended – taking the fight to golden point for the gold medal.

In extra time, it was Zheng who connected with a head kick. Almost unbelieving, the Chinese athlete dropped to her knees and thrust her arms into the air, exulting in a victory against a fighter backed by a very partisan and very vocal crowd.

In the male -58kg division, Nursultan Mamayev of Kazakhstan won a ticket to the final when Tae-hun Kim of Korea was unable to take part in his semifinal match due to injury. That put him into the last match against Jesus Tortosa Cabrera of Spain.

In Round 1, the Spaniard won an early one-point lead with a stabbing leg jab, but the Kazakh shot back with a thwacking round kick to the torso - accompanied by a howling kiap. In the final seconds, both unleashed a series of kicks, taking successive points and the round ended 2-2.

In Round 2 both men fired front-leg side and round kicks before the Kazakh scored – but the Spaniard equalized to 3-3. This was a match between a very, very closely matched pair.

Round 3 started with both connecting but neither scoring, but with the Kazakh looking fresher and lighter on his feet. He caught his opponent again with a back leg round kick – and yet again Tortosa Cabrera equalized. The Spanish athlete then lost a point for a shin block - and won the point back with a punch. Thus ended the round – and it went to golden point. The Spaniard was firing a barrage of front leg kicks but in a near-perfect display of timing, Mamayev unleashed a rear-leg round kick for point, match and gold.

Farzan Ashourzadeh Fallah of Iran and Tae-hun Kim of Korea took bronzes in the division.

A total of 237 athletes from 56 countries are competing at the Manchester Regional Arena for top honors in the Manchester Grand Prix event, which will continue until October 18. The third and final day of the competition, on October 18, will feature two weight divisions: the women's -49kg and the men's -80kg.