MANCHESTER, UK (Oct. 20, 2018) – Thailand, Iran and China claimed gold on a captivating second day of action in Manchester, in front of a sold out crowd.

In the Women’s -49kg category, Panipak Wongpattanakit of Thailand emphatically claimed gold, whilst Hadipour Seighalani of Iran was crowned Grand Prix champion in the Men’s -58kg and Shuyin Zheng of China secured gold in the women’s +67kg.

The first final of the day featured number one seed, Panipak Wongpattanakit of Thailand and Jae-Young Sim of Korea. The fight started cagily as both athletes defended well. Wongpattanakit claimed the first and only point of the round by forcing her opponent into a gam-jeom. Both fighters defended equally as well in the opening stages of round two. However, Wongpattanakit landed a powerful blow to Sim’s trunk after 40 seconds. This seemed to inspire Wongpattanakit, as she landed multiple kicks and punches to the trunk to take a 9-0 lead into round three. Wongpattanakit defended valiantly in the final round. Her neat footwork and skilful blocks were enough to keep Sim at bay. Wongpattanakit went on to land one last kick to the trunk to claim an emphatic 11-0 victory and win her second Grand Prix of the year, following her victory in Taoyuan last month. 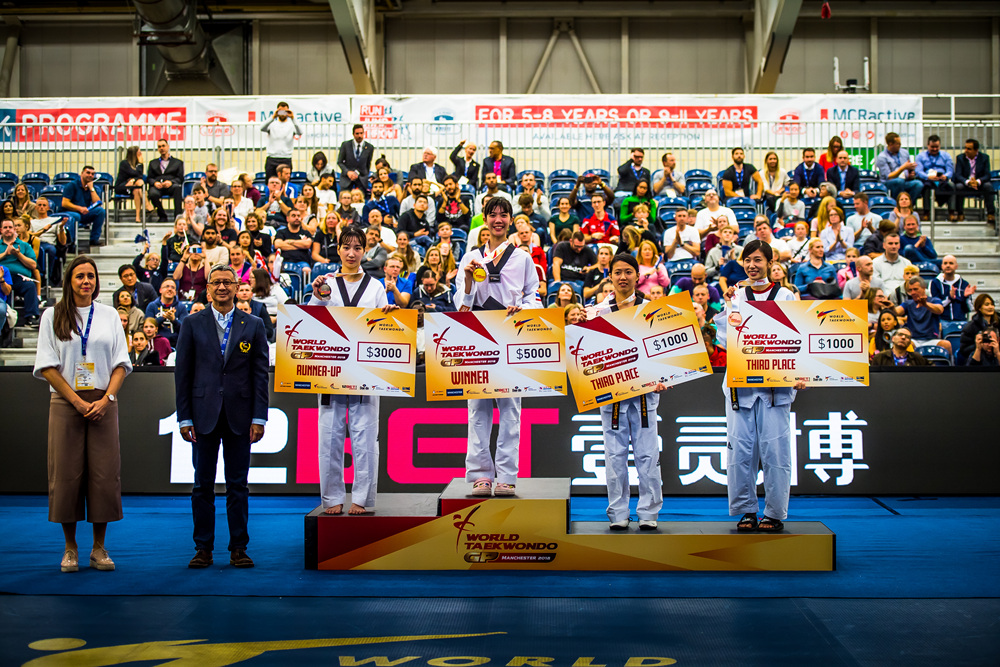 The bronze medals were claimed by Adrian Vicente Yunta and Jesus Tortosa Cabrera, both from Spain. 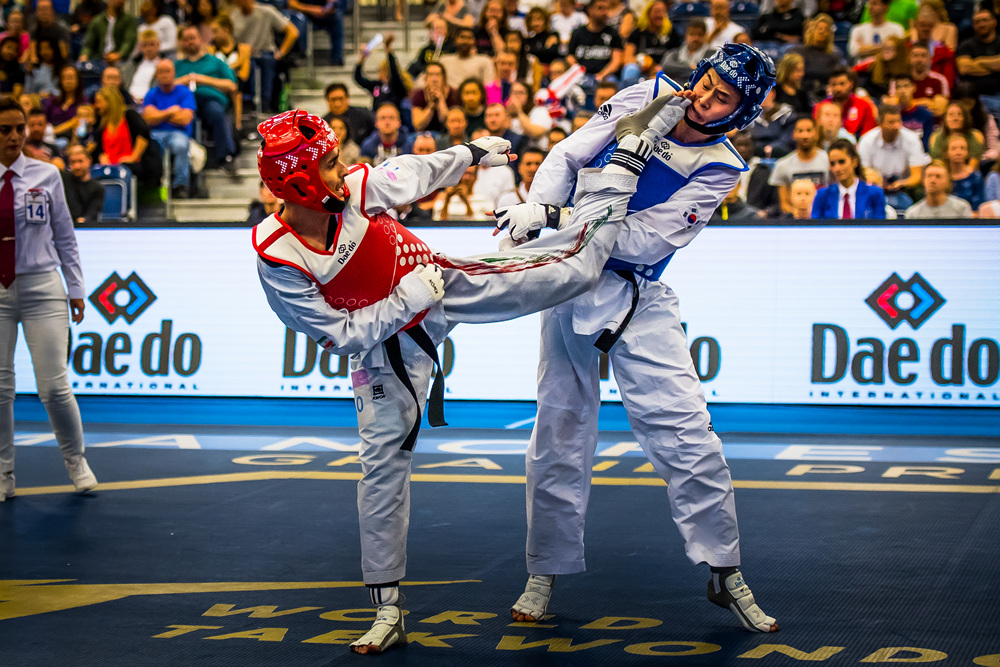 Home-grown hero and pre-tournament favourite, Bianca Walkden of Great Britain and Olympic champion, Shuyin Zheng of China fought in a captivating final fight of the day. The opening round began with loud cheers of support from the crowd for Walkden. It was a cautious round, as neither fighter wanted to give anything away. In the end, no points were scored. Round two began in an equally cagey fashion. It was Zheng who landed the first blow with a punch to the trunk. Walken responded with a kick to the trunk of her own, only for Zheng to regain her lead with a kick to the trunk. Another punch to the trunk from Zheng meant that she took a 4-1 lead going into the final round. Walkden came out fighting, but just couldn’t break Zheng’s impressive resistance. Zheng landed another punch to the trunk to extend her lead to four points. The home crowd remained optimistic though, as Walkden continued to attack. Zheng landed another punch to the trunk and the match seemed to be out of sight. However, Walkden forced her opponent into conceding three consecutive gam-jeom’s to bring the scores back to 6-4 in Zheng’s favour with five seconds to spare. Much to the disappointment of the crowd, Walkden just couldn’t land that final winning blow. In the end, Zheng claimed a 6-4 victory and secured her first Grand Prix of the year.

Maria Espinoza of Mexico and Pan Gao of China shared the bronze medals. 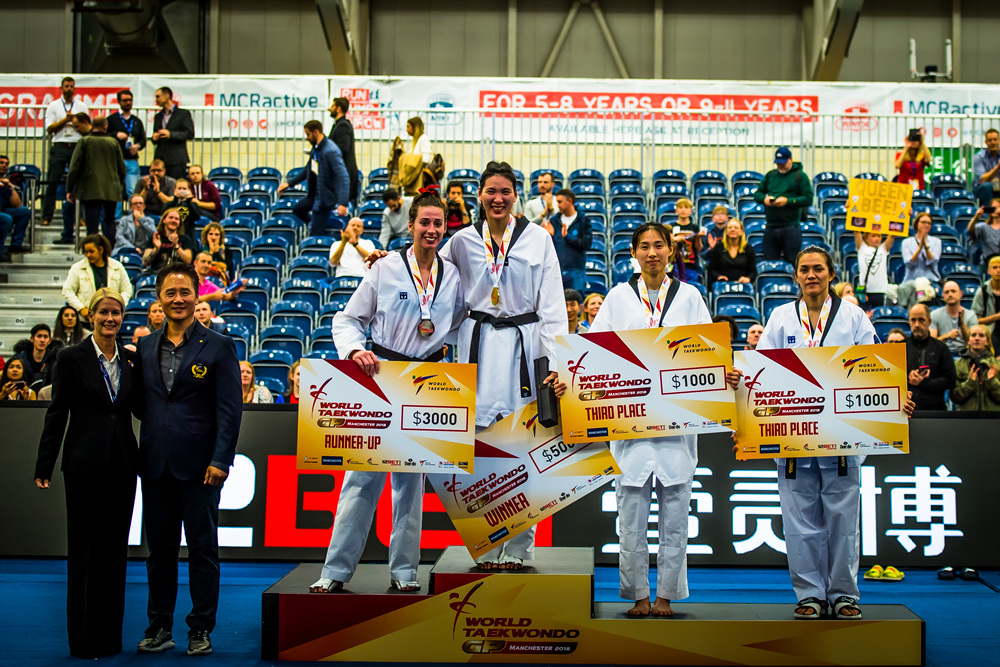 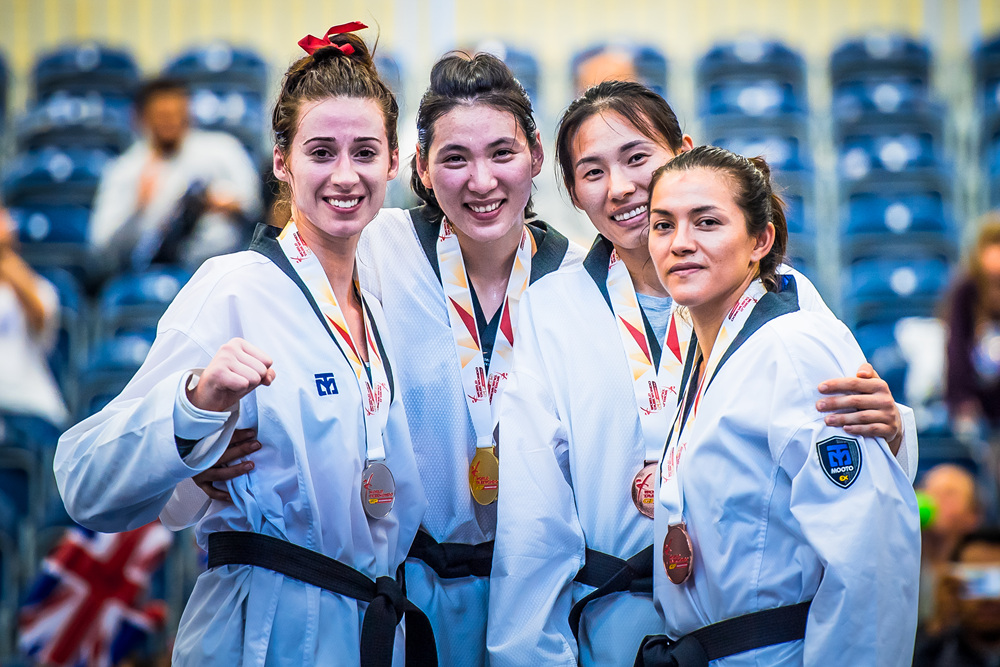 Tomorrow, on the final day of the Grand Prix, athletes will compete in the women’s -57kg and men’s -80kg weight categories.