In the event’s final day, the Women’s -49kg and Men’s -80kg divisions were contested at Taoyuan city’s Taoyuan Arena.

In the first semi-final, Youth Olympic and Asian Games gold medalist Panipak Wongpattanakit of Thailand took on Kristina Tomic of Croatia. Wongpattanakit asserted her dominance early, attacking forward with side and cut kicks, winning two points, but picking up a penalty. Round 1 ended 2-1 to the Thai. In the second, a soaring round kick put Wongpattanakit on four points. She continued to pressure her opponent backward and raised her score - but the Croation was finally getting into her game and landing. Round 2 ended 8-7 to the Thai. In Round 3, a thunderous cut kick to the torso put Wongpattanakit on 10 points.  Tomic charged but it ended 10-7 to the Thai – who sportingly applauded her opponent at the conclusion of the match.

The second semi pitted European Champion Rukiye Yildirim of Turkey against Korean Rio Olympic gold medalist So-hui Kim. Yildirim went onto the attack, but Kim is a superb counter fighter and devilishly difficult to score on. Kim drew first blood with body kicks, ending Round 1 4-0 up.  Both mixed it up in the second, with Kim earning applause for her steady scoring, while evading the Turks’ high kick. Yildirim finally connected, and Round 2 ended 11-2 to Kim. Round 3 started with rough clinch work, then Kim shifted from her customarily conservative techniques, launching ax and crescent kicks and punches. But, her body kicks continued to impact. In the last 20 seconds Ylidirm fired multiple head kicks, but Kim’s evasion is masterly. It ended 17-3 to the Korean.

So: The final. Predictably, the Thai offended and the Korean defended, but neither connected and Round 1 ended scoreless.  In the second, Wongpattanakit probed with her side kick and looked dangerous with her long, high, arcing round kick; Kim stood off, and the referee demanded action. Kim finally found the range, landing three body kicks in fast succession, ending Round 2 6-0 up, and suddenly, Wongpattanakit was in trouble. In Round 3 Wongpattanakit attacked forward; Kim danced, and was penalized for grabbing. The Thai high kicked, but was jammed by Kim’s defense, but then found the range, lifting her points to five. With 30 seconds left, Kim, just one point ahead, attacked. But attack is not her comfort zone, and the Thai equalized to 7-7.  There were sharp clashes in golden point, with the crowd loving it. Wongpattanakit was penalized for exiting area - but scored to Kim’s body, winning gold. 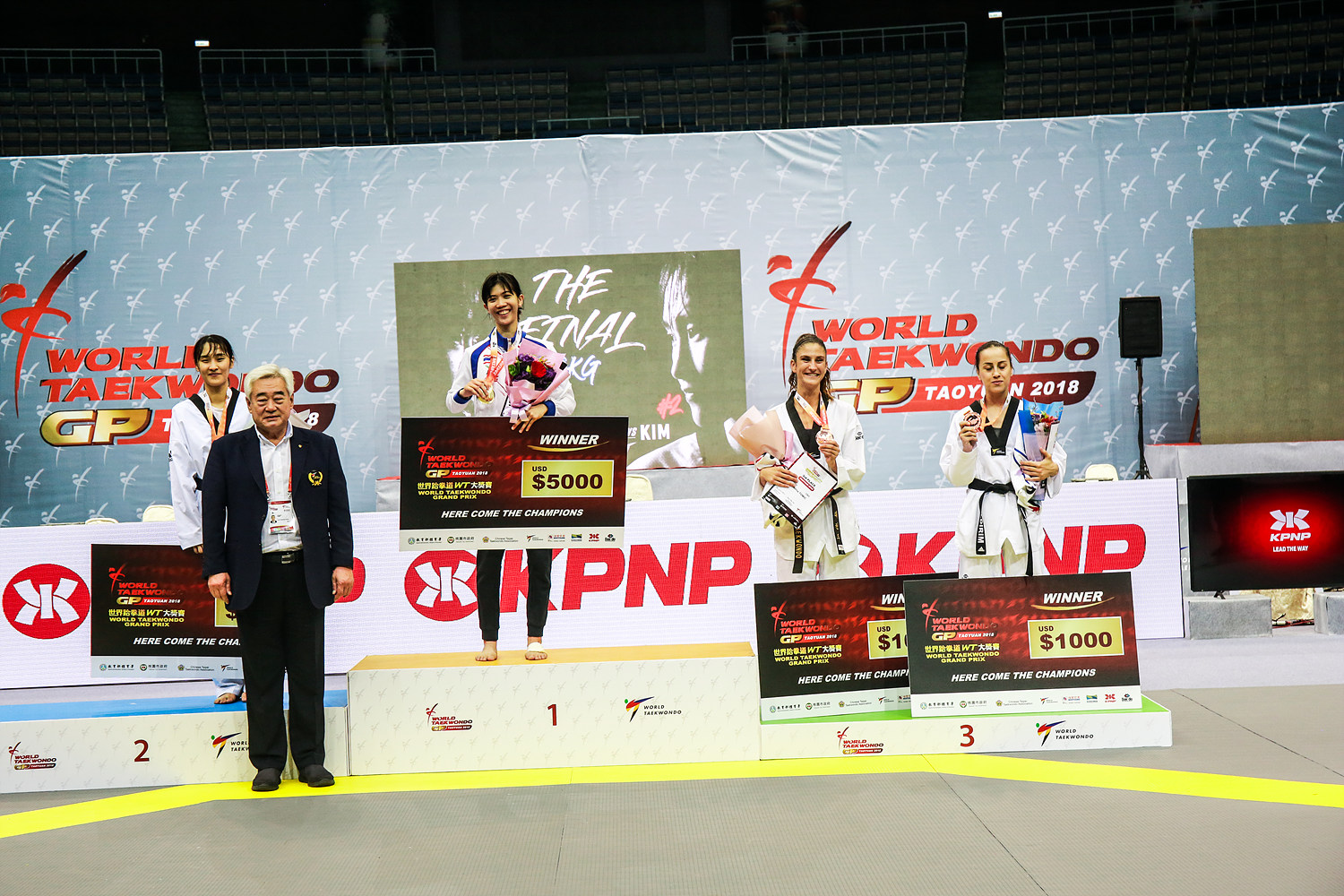 In the first semi-final, Rio gold medalist Cheick Sallah “Fearless” Cisse of Cote d’Ivoire took on Egypt’s Sief Eissa. The popular Cisse danced onto the mats to cheers - then it began. Eissa had the height advantage, while Cisse is a power fighter who never steps back. Cisse drew first blood, but Eissa was unintimidated. Round 1 ended 4-2 to Cisse. The second saw less footwork, more toe-to-toe. In a slugging match, Eissa equalized ad Round 2 ended 4-4.  In the third, Cisse drew ahead after detonating a bomb of a punch, but Eissa stood fast, giving no ground. In the last seconds, Eissa attempted high kicks, body kicks and a spinning heel kick, but the match ended 5-4 to the Olympic champion

The second semi saw GB’s Damon Sansum battle Russia’s World and Grand Slam Champion Maksim “The Red Machine” Khramtcov. The Russian is a tall, tricky fighter with a creative arsenal, but Samsun started actively, keeping him off-balance. The Russian picked up a penalty for grabbing – then went to work with high kicks from both open play and clinch. Round 1 ended 8-3 to Khramtcov. In the second, Sansum tried head kicks but suffered from the Russian’s height. There was lively play from both men, mixed with clinching, but the score was looking unequal: Round 2 ended 16-3. The final round was rougher as Sansum attacked, but Khramtcov’s head kick continued to earn its pay. The bout ended 21-12, putting the “Red Machine,” into the final against Cisse.

In a very fast clash, Khramtcov scored to the body, then landed a punch to go 3-0 up. Cisse responded with a blitzkrieg attack and a punch for his first point. Another punch gave Cisse another point, while his wicked head kick drew gasps from the pros at ringside. (Luckily for Khramtcov, it missed.) Round 1 ended 4-2 to the Russian. In the second, Cisse landed a downward slicing kick to Khramtcov’s torso protector, for 4-4, then drew ahead, 7-4: this was fine play by the Olympic champ.  But the Russian returned fire with high kicks, lifting his score to 11-7. Cisse spin kicked; the Russian countered mid-spin; and Round 2 ended 19-8 to Khramtcov. In the final round, Cisse went into an all-out attack, delighting the crowd with dervish-like spin kicks, but it was the Russian who was scoring – with body shots and his trademark head kicks. His points soared. In the last seconds, Cisse dropped a huge, arcing downward round kick, as if to entertain the crowd though it was too late to win. The final score was 34-16 to Khramtcov. A totally convincing victory by the Russian – whose coach had confided earlier that his fighter was not at 100 percent fitness. Given this, the “Red Machine” looks unbeatable at present.

That ended the evening – and the 2018 Taoyuan World Taekwondo Grand Prix. Taekwondo’s elite clash again at the fourth Grand Prix of 2018 in Manchester, Great Britain, from Oct. 19-21.