The normally eloquent Briton seemed overcome with emotion as she took to the podium. “I want to ‘thank you’ to everyone, I am still shocked, I am so pleased,” she said.

The glittering (and well air-conditioned) gala dinner was light years away from where she had written history just two nights earlier.

In the sapping heat of Abidjan’s Palais de Sports de Treichville, in the women’s  heavyweight (+67kg) category, the sweat-drenched 26-year-old wielded an arsenal of stabbing side kicks, killer round kicks and arcing ax kicks to win the 2017 World Taekwondo Grand Prix Final over Team Korea’s Da-bin Lee in convincing style, 16-9.

That win capped the “Queen Bee’s” earlier victories in the 2017 Grand Prix Series 1, 2 and 3, held respectively, in Moscow, Russia; Rabat, Morocco; and London, Great Britain. It marked the first time a fighter of either gender, in any weight category, had won an entire Grand Prix series – an elite-level series of four annual tournaments that invite only the top-ranked Olympic players. 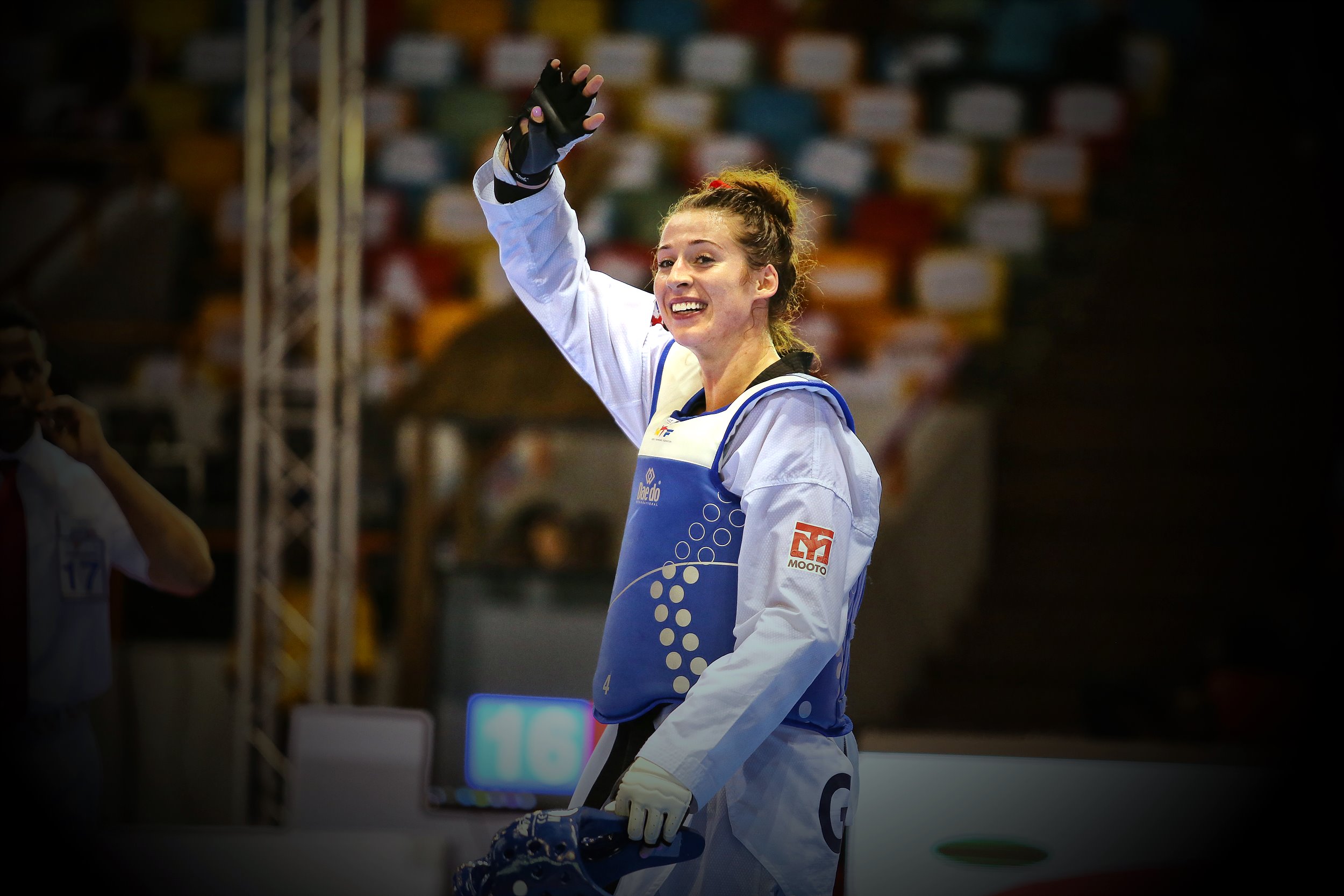 “I was really emotional, I started crying,” Walkden said about the aftermath of her win. “I did not realize how much it meant to me, I did not realize I would be that happy - I cried more here than when I won the Worlds.”

After a disappointing bronze at Rio in 2016, all Walkden’s stars have aligned in 2017. Unbeatable and totally dominant in her category, she successfully defended her World Championship title in Muju, Korea this summer, on top of the historic Grand Prix run.

The Briton, who started taekwondo at age 11, is the full package: She combines a leonine physique with good looks, weapons-grade skills, a truckload of personal charm and a quirky Liverpool sense of humor. “Bianca is Great Britain’s gift to taekwondo,” said WT President Chungwon Choue. “Not only is she a superb player, she also has that special something: charisma.”

But Walkden’s taekwondo odyssey has not been easy: The road to success has been paved with pain and despair.

From Agony to Victory

Walkden’s first major win was at the 2011 European Championships – but her career almost ended with a torn ACL that year. “That made me miss the London Olympics which I was devastated about,” she said; she was forced to watch from the sidelines as room-mate Jade Jones captured gold. She was in recovery when – heartbreakingly - she tore the ACL on her other knee in 2014, just as she was gearing up for the 2015 World Championships.

Worse than the pain was the uncertainty. “The operations and the training and the rehab were not the hardest thing, it was the mental side: Trying to learn to walk and kick again and always thinking,’ Could it snap again?’” Walkden recalled. “Taekwondo is a very complex game and it could go wrong at any time; I still have niggles.”

To “Queen Bee’s” credit, just eight months after her second ACL surgery, she was not only walking, she was fighting at the highest level. She won the heavyweight title at the 2015 Worlds against French taekwondo legend Gwladys Epangue, turning the match around in the last found seconds with an ax kick to the head. Since then, she has been on a surge.

Her success stems from a fanatical work ethic. “She wins a Grand Prix on Saturday evening and on Sunday morning, she is back working out,” said WT Technical Committee Vice Chairman Philippe Bouedo. “She has determination, she is a hard worker, she is a consummate professional,” added Team GB Performance Director Gary Hall. “She is one of the first into the gym and one of the last to leave.” 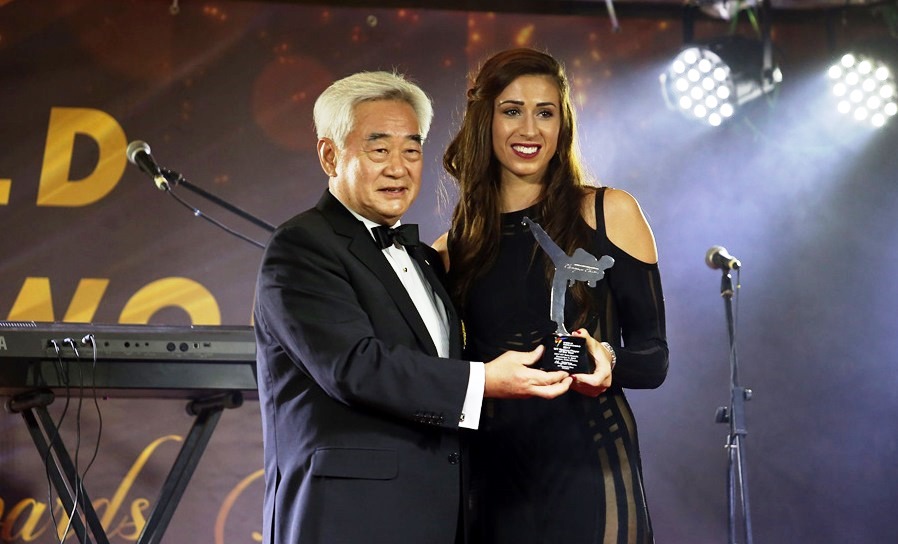 At the Pinnacle of the Game

Currently, Walkden is the toast of the sport. “Everyone respects her, she is ceaseless in fighting, exerting all her energy, always putting in her best effort,” said WT Technical Director Jin-bang Yang. “Most coaches envy that, they want to learn from her.” She is even the envy of the sport’s top team, Korea - from whence taekwondo originated as a domestic martial art in the 1950s, before morphing into a global combat sport in the 1980s.

There is now just one title remaining that Walkden lusts after: Olympic gold. “I want it all, and the last one is the Olympics,” she said. “I will give everything I have got for the entire Tokyo Olympic cycle.”

But can she maintain her current peak through 2020? “Nothing is guaranteed in a full-contact sport with injuries, so we make sure to review every event and assess and plan to make progress,” said Hall.

One person who will be alongside Walkden on the track to Tokyo is her superstar roommate, teammate and best mate - double Olympic gold medalist Jade Jones.

“There is something special in Bianca, though she was hidden in the shadow of Jade Jones,” said Swiss referee Walid Younas. “She has got this positivity - this motor that drives her and which helps pull along the youngsters in the GB female team.” About Jones, Walkden has much to say. “We are on this massive journey together; we know the pressure, what it takes to train.” Walkden said. “We are friends for life and do whatever we can for each other: She is an inspiration to me as well as my best friend.”

“The way she conducts herself off the mat is what is so endearing about her,” said TV Commentator John Cullen. “She is a very giving person.” “She plays with the young kids, talks with them, takes selfies with them,” added Bouedo. “She is very nice with the people who clean the venue, she makes jokes with the media and with colleagues: She is fun!” 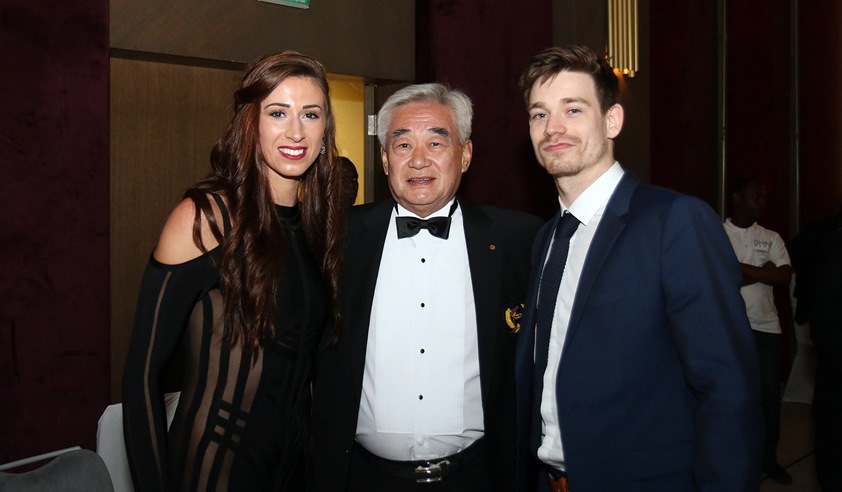 The man who knows her best is her beau - former Great Britain international and current fighter for Moldova, Aaron Cook. “I love her personality, she is very funny, friendly and always thinks of others,” Cook said. “When she was fighting for her historic Grand Prix win, she was worrying about me.”

The two have been an item for 10 years. Both saw their dreams dashed at the London Olympics: Walkden suffered injury, while Cook faced non-selection. These experiences have bonded them. “We went through some hard times together but she kept trying,” said Cook. “Now look at her: She is the global poster girl!”

Walkden returns the love, though does not know when wedding bells might chime. “We have been together for so long, I love him to pieces,” she said. “If he asks me, he asks me - but if not, I am still here, still with him.”

So: What might taekwondo players of future generations say of Walkden? “I want to leave a legacy in the female heavyweight division,” Walkden admitted. “Never give up! Die trying!”

But former opponent Epangue reckons the Queen Bee’s legacy should be even broader. “I have a lot of respect for her as a fighter: even though I am older than her, she is an inspiration to me,” Epangue said. “We should show her fights in taekwondo schools around the world to teach girls what fighting spirit is.”