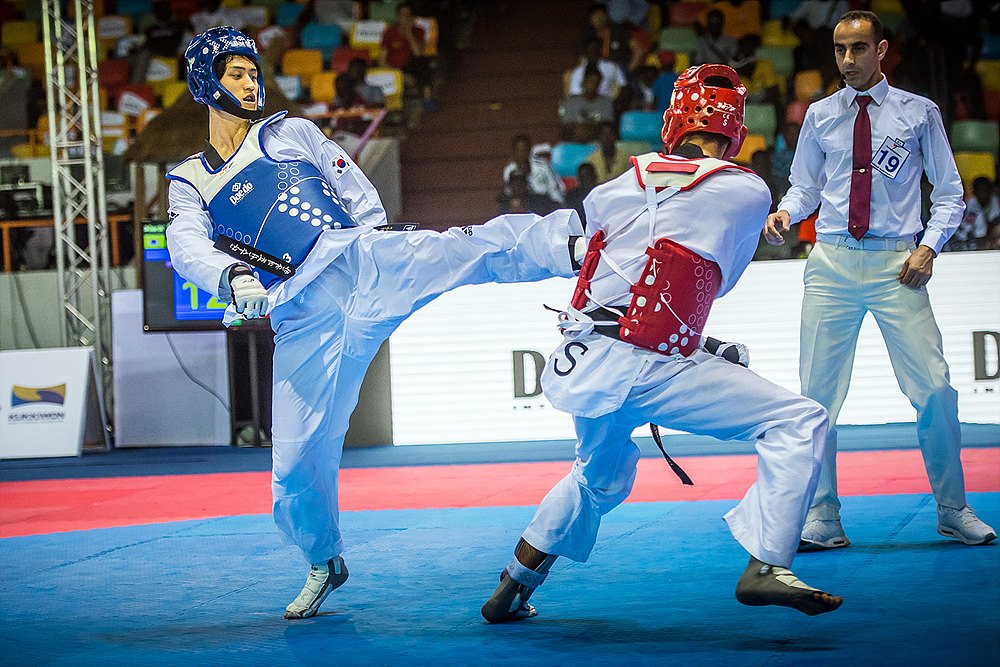 Once again, the heat in Abidjan’s Palais de Sports de Treichville proved grueling for the players, but there was much to fight for. Athletes were competing not only for Olympic ranking points, but also for prize money – USD6,000 for gold medalists, USD3,000 for silver medalists and USD1,000 for bronze medalists – and for a spot in the new Grand Slam Championship Series. The upcoming series commences in Wuxi, China, over December 2017 and January 2018, offering the biggest prize money ever in taekwondo.

In the final of the category, Jade “The Welsh Wonder” Jones, Team GB’s double Olympic gold medalist, took on Marta Calvo Gomez of Spain. This match had a curious undercurrent: Marta’s sister, Eva, Jones’ longtime rival, had retired after losing to the Briton at the Rio 2016 Olympics. Could Marta win a revenge victory on her sister’s behalf? Jones’ stabbing side kick opened the scoring, then piled into Calvo Gomez, establishing an early dominance. Racking up points with head kicks and side kicks she kept Calvo Gomez on the back foot, taking the first, 11-3. The second round continued in similar fashion. Jones battled forward with side kicks and heels hooking up into the Spaniard’s body protector. Calvo Gomez responded with front leg oblique kicks and round kicks on the mid-line, but was clearly being overpowered. The round ended 13-4 to Jones. In the third, Jones surged forward, forcing her opponent off the mats, then landing another of her trademark high kicks – another nickname for “The Welsh Wonder” is “The Headhunter.”

The Spanish player was literally being outgunned and outfought, going into injury break after a facial clash. In the final seconds, Calvo Gomez tried some more muscular techniques, including spinning kicks, but Jones continued to blast forward, ending the game 26-7. It had been a display of fierce skill, granting Jones her second Grand Prix title in a row, following her gold medal at Series 3 in London. 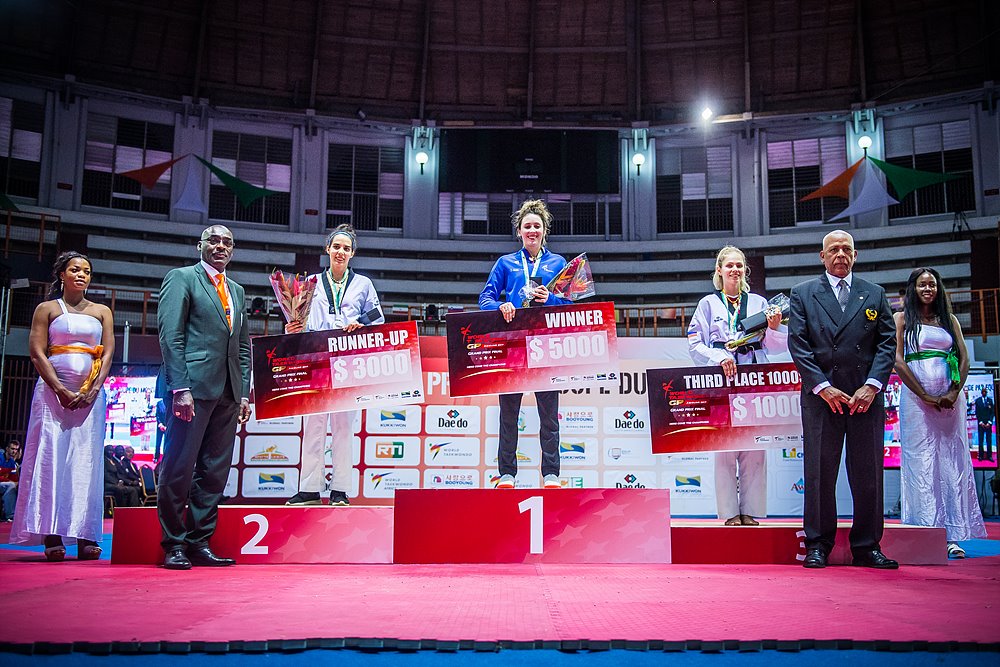 Calvo Gomez took silver, and in the bronze medal match, Tatiana Kudashova faced off against Russian team-mate Ekaterina Kim, winning in overtime after the two drew 9-9 in the regular rounds. 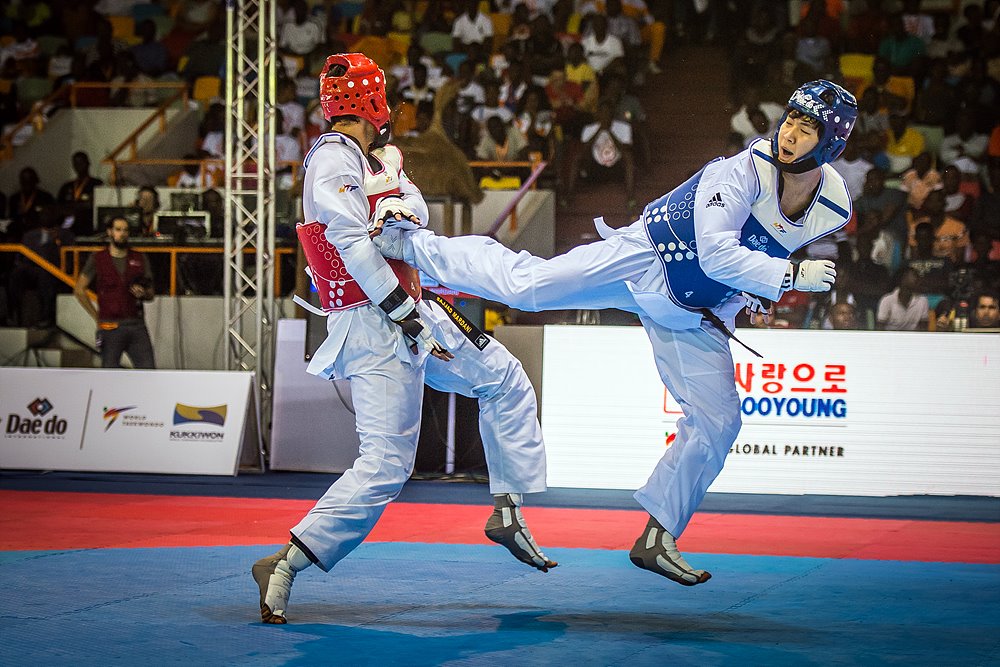 Men’s +80kg Category
In the final of the heavyweight category, Kyo-don “The Bear” In of Korea – who has recently won a battle against cancer - went into battle against Vladislav Larin of Russia.

The first round was an unsatisfying affair: A war of nerves in the center of the mats, interspersed with probing kicks and the referee imploring both fighters to fight. It ended 0-0. The second round started with a burst of action and some clinch work, then returned to psychological warfare; it also ended score-free. In the third, there were brief flurries of single-strike action and apparent connections – but no scores lit up the board. Remarkably, the round also ended 0-0. In golden point, In attacked forward - but it was Larin who scored on the retreat with a crafty round kick to the body - taking the gold medal with just two points scored in the entire match. 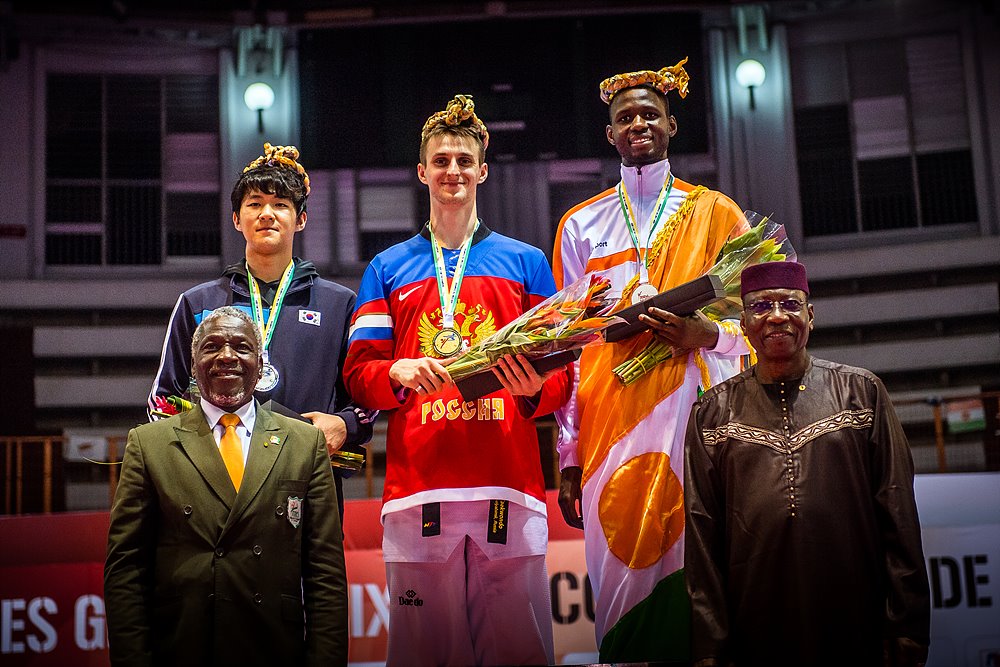 Abdoul Issoufou of Niger defeated Sajjad Mardani of Iran for the bronze.

The final was a dream match-up as Dae-hoon Lee face off against Alexey Denisenko of Russia. Lee is super-fit and a brilliant technician with a wide arsenal, while the Russian is one of the trickiest fighters in the sport, with a wide range of high-flying and unorthodox techniques. But the match was particularly special for Lee. He has already won two Grand Prix Finals - in Mexico City 2015 and Baku, Azerbaijan in 2016 – meaning that a win in Abidjan would give him a hat trick. 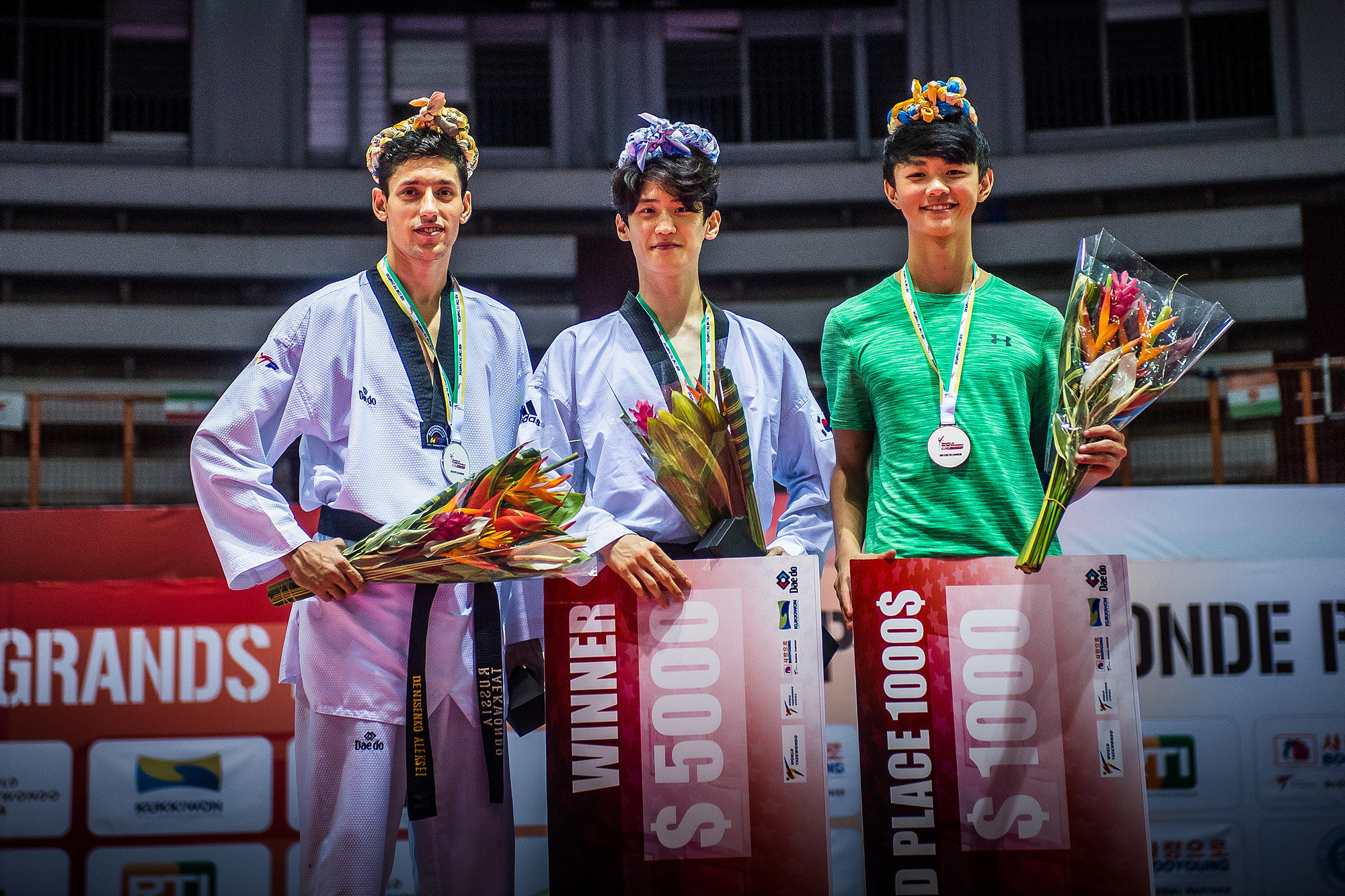 Denisenko drew first blood with a heel hook kick to Lee’s head as the Korean charged forward, but Lee quickly got into his stride and connected as both men exchanged high kicks. The board rose 8-5 to Lee. In the second round, Denisenko bought the score up to 7-8 as he and Lee dueled with round, ax, side and hook kicks – a thrilling display of weaponry from both players. Lee landed an arcing ax kick to Denisenko’s head protector that drew gasps from the spectators; the Russian responded with a jump spinning back kick and the board rang up to 12-10. The round ended on that score, with Lee ahead. Round 3 promised fireworks – and delivered. Lee landed his round kick to the body, upping his score to 14.Fighting forward, he kept Denisenko on the edge of the mats – sound ring control from the Korean. In the final 30 seconds, Denisenko tried jumping ax kicks as he surged into top gear and the seconds counted down. Lee was penalized and the scoreboard went to 13-14, but the Korean master player had timed it perfectly: The buzzer went. That meant a well-earned silver for Denisenko, gold for Lee - and his third Grand Prix Final title in a row; a historic achievement.

Yu-jen Huang of Chinese Taipei defeated Jaouad Achab of Belgium for the bronze.

In the final, 2016 Olympic gold medalist and 2015 world champion Hye-ri Oh of Korea took on 2014 Asian Games champion Yunfei Guo of China. The match would provide the big surprise of the evening. 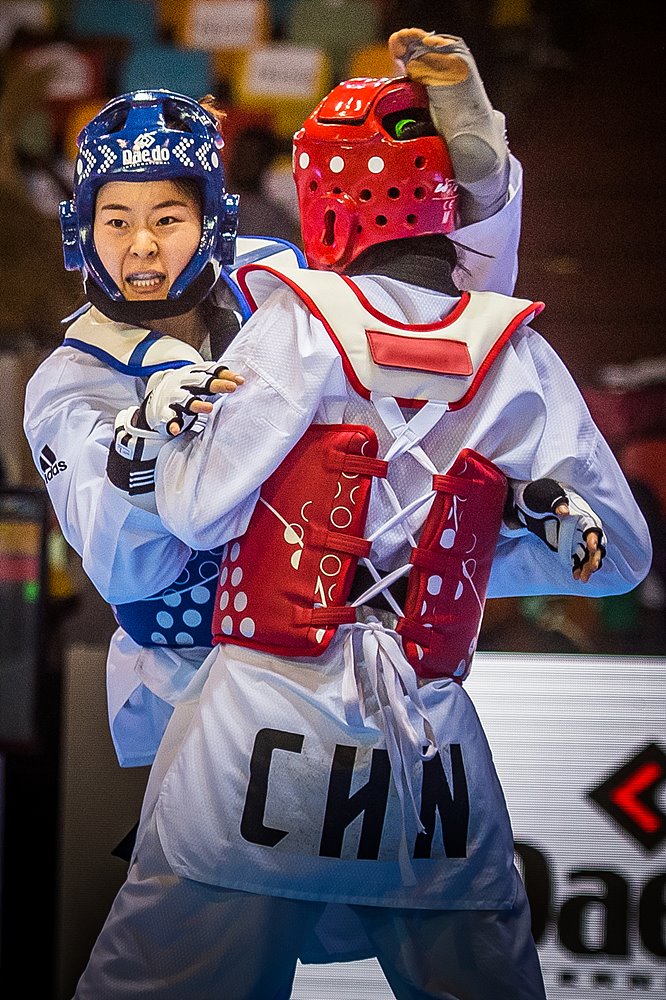 Guo landed first, going two points up, then Oh landed a crescent kick to the head from the clinch; it was disallowed for holding. She scored immediately after with a punch for a point, but Guo responded with accurate kicks, taking the board to 10-2. In the second, Guo’s target radar remained locked on, and she went 14-2 up. Oh looked visibly shocked to be falling so far behind as Guo continued to score with a range of techniques. The round ended 21-3 to Guo. Oh is a master at coming back from behind, but she now faced a very wide point gap indeed.

Oh seemed to regain confidence in the third round, but Guo continued to score. Oh landed a head kick – again it was disallowed for holding, leading to a coach video replay appeal. Disallowed. Again, Guo scored, going 25-8. Oh desperately attacked forward, but was eating kicks. The match ended 31-9 to Guo – a tremendous victory for the relatively unknown Chinese girl over an opponent of Oh’s quality. 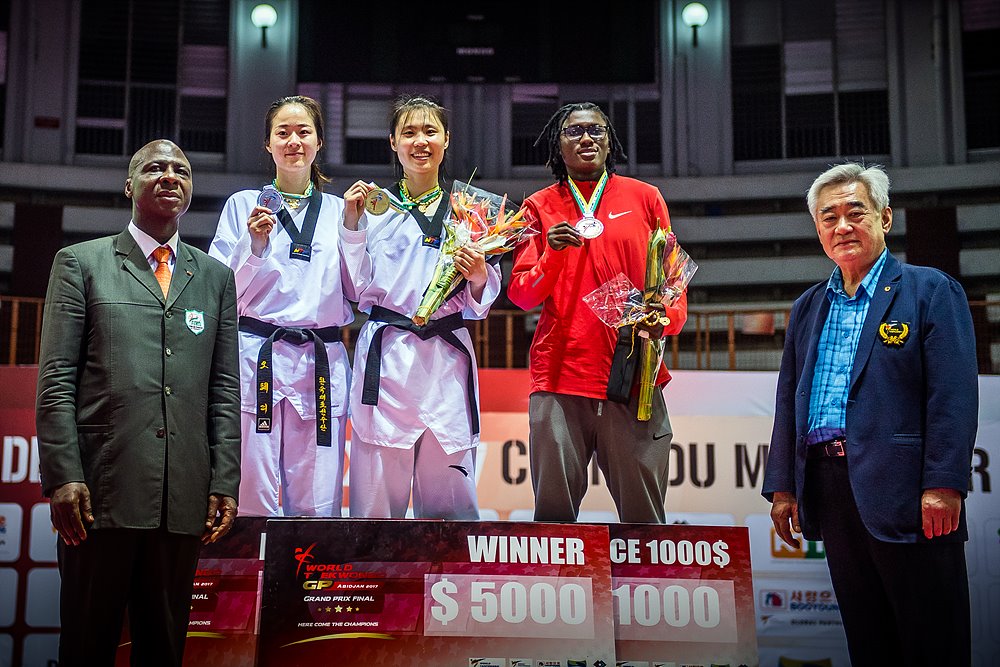 The players who faced off against each other in sweaty dobok and bulky body protectors will meet again on Dec.4 in evening dresses and dinner jackets, as World Taekwondo honors its best and brightest at the 4th annual Gala Awards. And while the Grand Prix is over for 2017, combat resumes in Palais de Sports de Treichville on Dec 5. as the two-day World Taekwondo Team Championships get underway.