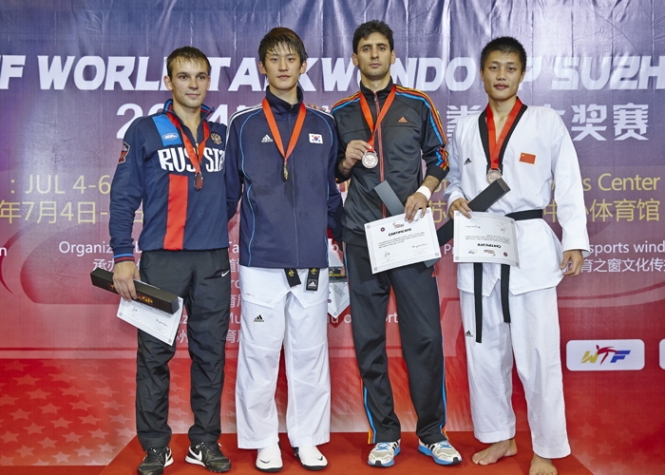 After three days of heated competitions at the 2014 Suzhou Grand Prix Series, a total of 18 countries took home at least one medal. A total of 236 athletes from 57 countries competed for top honors at the Suzhou event, which took place at the Suzhou Sports Center.

In the overall medal tally, Korea topped other countries as it took home two gold medals, two silver medals and one bronze medal. Host China came next with two golds and two bronzes, followed by Chinese Taipei with one gold and one bronze.

Spain, Gabon and the Isle of Man won one gold each, while Russia clinched three silvers. Brazil, France and Mexico grabbed one silver each, while Argentina, Iran and the United Kingdom took two bronze medals each. Australia, Hungary, Serbia, Azerbaijan and Japan took home one bronze medal each.

Kim made it to the round of four by beating Great Britain's Jade Jones, the gold medalist at the 2012 London Olympic Games and the silver medal winner at the 2013 Manchester Grand Prix Final, 8-3 in a quarterfinal match.

In the men's -68kg final contest, Korea's Dae-hoon Lee, the silver medalist at the 2012 London Olympic Games, crushed Russia's Vasilii Nikitin 19-6 to win the gold medal and a top-prize money of $5,000.

Lee advanced to the final match as he managed to brush aside a stiff challenge from his semifinal opponent, Iran's Behnam Asbaghikhanghah, to score the winning point in a fourth golden-point round.