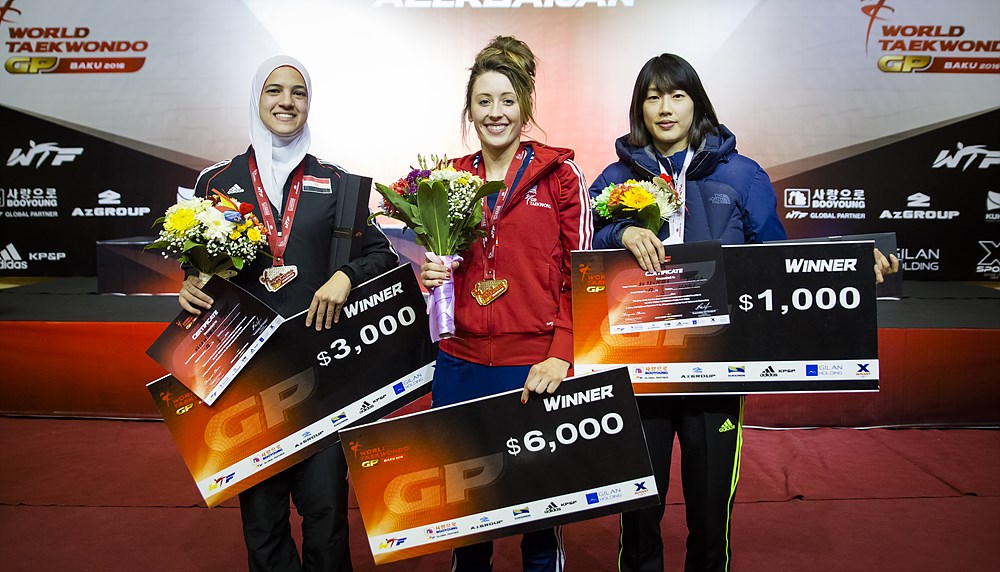 BAKU, Azerbaijan (Dec. 10, 2015) - On the second day of the 2016 World Taekwondo Grand-Prix Final, two gold medals were won by Great Britain and one each by Iran and Korea.

Silvers went to fighters from Egypt, Russia, China and Belgium. Two bronzes were won by Russia, and one each by Korea and USA. And on a special note, the final match of the category saw what may be, in the fullness of time, be seen as one of the great all-time taekwondo matches.

The final day of the two-day event at the Sarhadchi Olympic Sports Complex in Baku saw two male and two female Olympic weight categories being contested. The Grand-Prix final pitted 118 athletes from 41 nations against each other for medals, prize money and early ranking points ahead of the 2017 fighting season.

The overall winners of the 2016 Grand-Prix Final were Great Britain in first place, Korea in second place, and Iran and Azerbaijan tied for third.

In the first semi-final of the evening, Jade “The Headhunter” Jones of Great Britain demolished an overmatched Ah-Reum Lee of Korea, 12-0, with a mixture of technique, conditioning and shear venom. Hedaya Wahba of Egypt took out Rachelle Booth of Great Britain in a well-matched fight that ended 3-1 to Wahba. So: It would be a Jones or Wahba for the gold.

Round 1 started with movement, kicks and war cries as both fighters commenced at a fast tempo, though Jones looked meaner and more aggressive, dropping Wahba to the deck with both an ax kick and a back kick. Though neither kick scored, Jones picked up a point for Wahba’s two falls, ending the round 1-0. 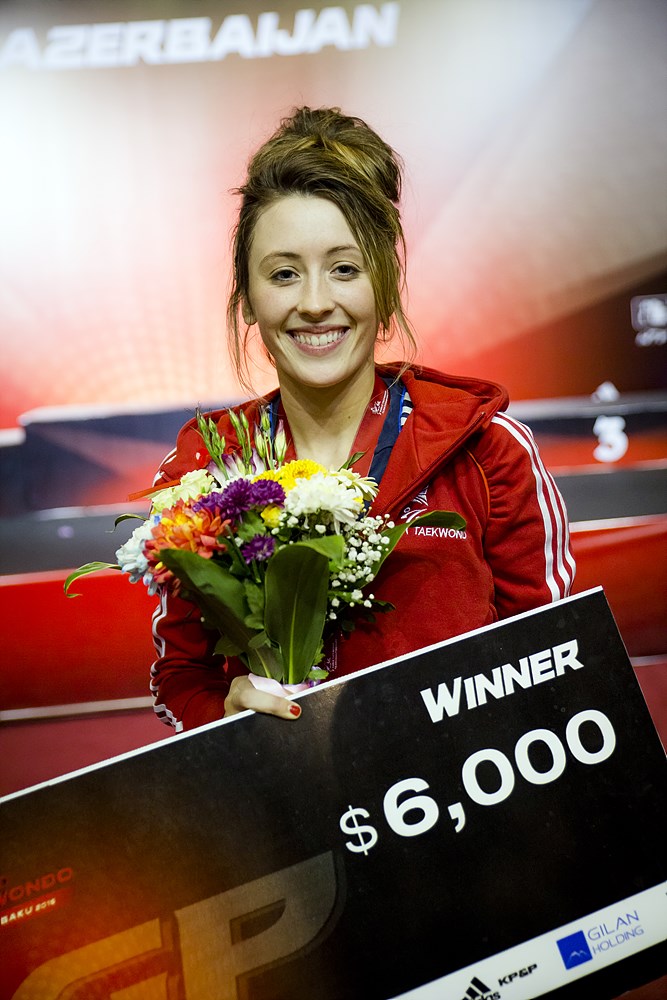 In the second, Jones piled on the pressure, forcing Wahba off the mats and trying to score with kicks up-close, but Hedaya covered well. After a head-kick appeal by Jones’ coach failed, Wahba took a more aggressive approach: The two engaged in messy flurries as they battled to control the center of the mats. In the dying seconds of the round, Jones landed a tight, in-close spinning back kick that lifted her score 4-0.

In the final round, Wahba came out attacking strongly, but Jones was having none of it and returned fire with venom. Jones kept trying her famed head kick while pushing back against all pressure from the Egyptian. The Briton’s conditioning and work rate were phenomenal;Wahba was simply unable to penetrate through Jones' constant bombardment. An ax kick shook Wahba, which Jones followed by a spinning kick. Then it was over: A formidable, 7-0 victory to “The Headhunter” who has taken her first, formidable step on the path to Tokyo 2020. Wahba’s silver was well deserved.

In a contentious bronze match marked by kick blocking and close-ranges clashes, Lee – perhaps thirsty for revenge after her drubbing at the feat of Jones - beat Jones’ team-mate Booth, 4-2, for the medal. 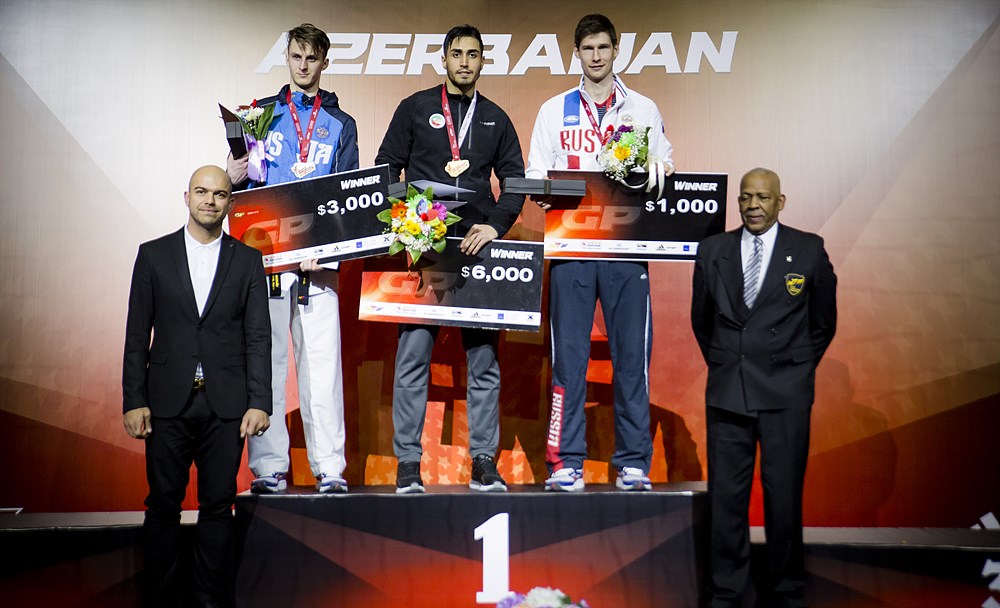 The first semi-final of the category was a civil war that pitted Roman Kuznetsov of Russia against compatriot Vladislav Larin; Larin took the fiercely-fought bout 10-8. In the second semi-final, Rio silver medalist Abdoul Issoufou of Niger was taken out in a fiercely fought battle by Sajjad Mardani of Iran, 7-6 – leaving Larin and Madani to contest the gold. 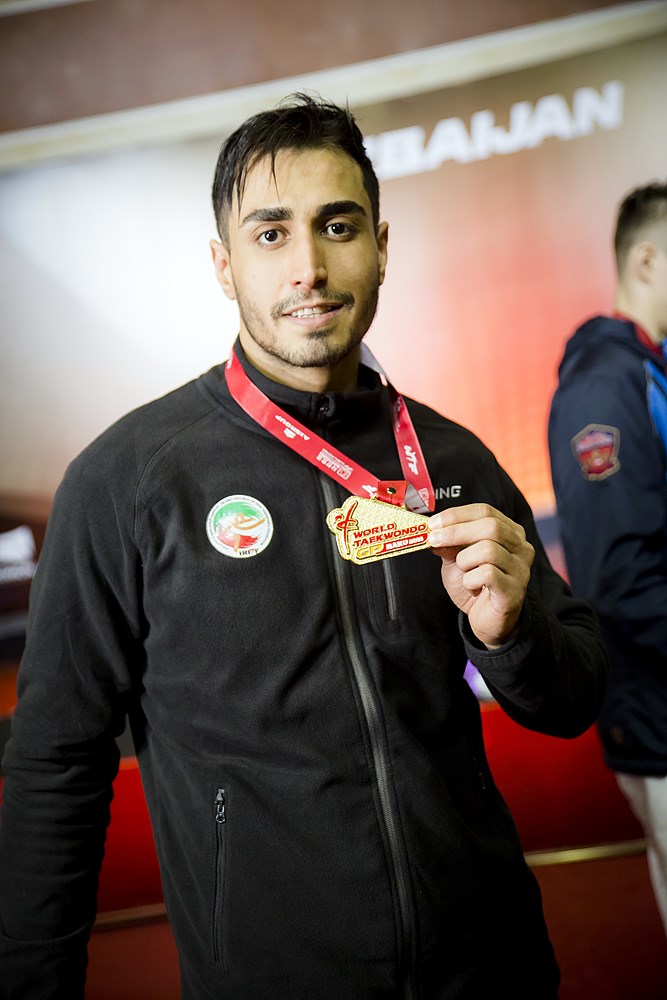 Mardani looking stylish and catlike from the outset, and scored with a punch almost immediately. Next, he unleashed a flurry of ax kicks which Larin covered well as both lads fought to control the center of the ring. Larin raised an ax; Mardani stuffed it by moving in and body checking. The feeling-out round ended 1-0 to the Iranian. In Round 2, Larin looked more aggressive and seized a point with a check kick to the body that shook Mardani. Mardan shot back with a punch and a crescent kick to the head, then a powerful round kick to the head and a serial attack that drove Larin backward. The Iranian fans started cheering, as Mardani grabbed another point to the body.

In Round 3, the fight could go either way. For the first time on the evening, the crowd started roaring. Mardani tried punch-round kick combinations. Larin shot back and Mardani could be seen acknowledging his opponent’s attacks. With one minute left on the clock, Mardani was 3-1. The Russian looked set to go into an all-out attack, but Mardani, unfazed, checked his offensive and picked up another point after Larin fell, raising his score to 4-1. 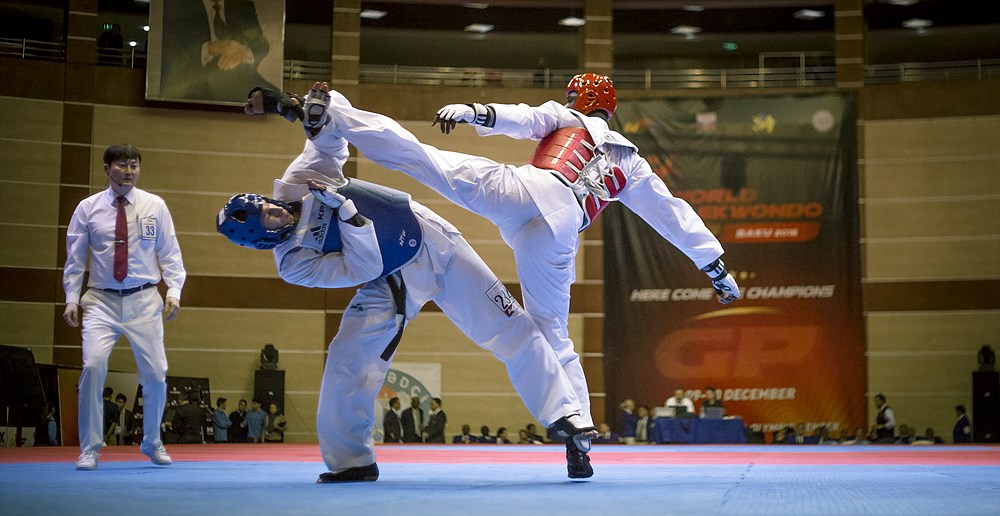 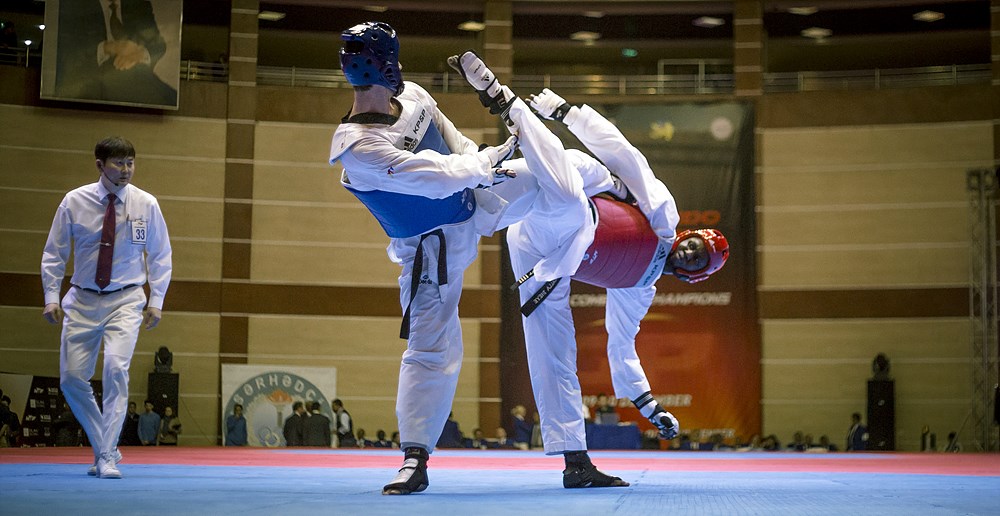 Fifteen seconds remained as Mardani moved in close, leaving Larin with no space to kick. But there were still drama to be played out. In the last three seconds Larin attacked, Mardani backpedaled out of the area and the Russian picked up a point to take the scoring to 2-4. Now two seconds remained. An appeal by the Russian coach provided a break from the action and the Russian and Iranian supporters in the crowd roared. The appeal was rejected. The fighters replaced their mouth guards, buckled on their head protectors and stepped up to the mark. The last two seconds were in play. Larin surged forward. Mardani kicked and retreated. And that was it. The battle ended 4-3 to the Iranian, leaving Larin with silver.

In the bronze medal match, Kuznetsov fought a very smart, mobile game against Issoufou. The towering Rio silver medalist from Niger, looked slow and uninspired throughout; the Russian took the bronze with a 2-1 victory. In the first semi-final, the towering Shuyin Zheng of China, the gold medalist in Rio, defeated Briseida Acosta of Mexico with a head kick in golden point. Rio bronze medalist Bianca Walkden of Great Britain scored an 8-4 victory over Team USA’s Jackie Galloway in a match marked by determined techniques from both fighters. The gold, then, would be won by either the Chinese or the Briton. 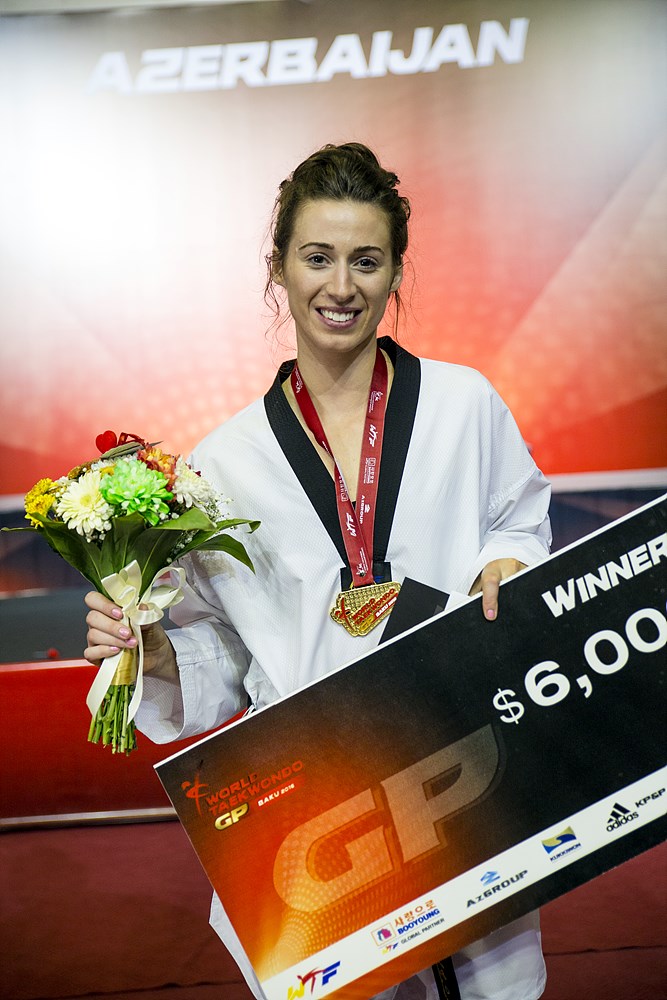 Round 1 started. Walkden was giving a slight height advantage to Zheng, but looked more determined, unwilling to let the Chinese girl dominate the center of the mats.  Both looked nervy and tense; both were fighting to win. Neither managed to connect, however, and the first ended 0-0. As the second got underway, Walkden tried to cut under Zheng’s long, long legs – no score. After that flurry, she unleashed a very fast ax kick to Zheng’s face, going 3-0 up. Walkden was clearly more mobile, firing combination attacks, while Zheng was more passive, relying on single techniques. The round ended 3-0 to the Briton, but against someone who is as dangerous with head kicks as Zhang, three points is not a comfortable margin.

In the third, Zheng came out looking more aggressively, surprising Walkden. The British fighter weathered the storm but picked up a warning for holding. Zheng’s machine-gun offensive, however, was very different from her customary game of sniper-like kicks fired from a stable stance. The Chinese athlete managed to claw back one point and as the seconds counted down, Zheng spun but did not kick; she was looking frustrated if not desperate. In the last 10 seconds, Walkden checked her opponent’s onrush with a side kick and defeated the Olympic gold medalist, 3-1, taking the gold and leaving Zheng with silver.

In the bronze match, Galloway beat Acosta for the medal, 1-0. 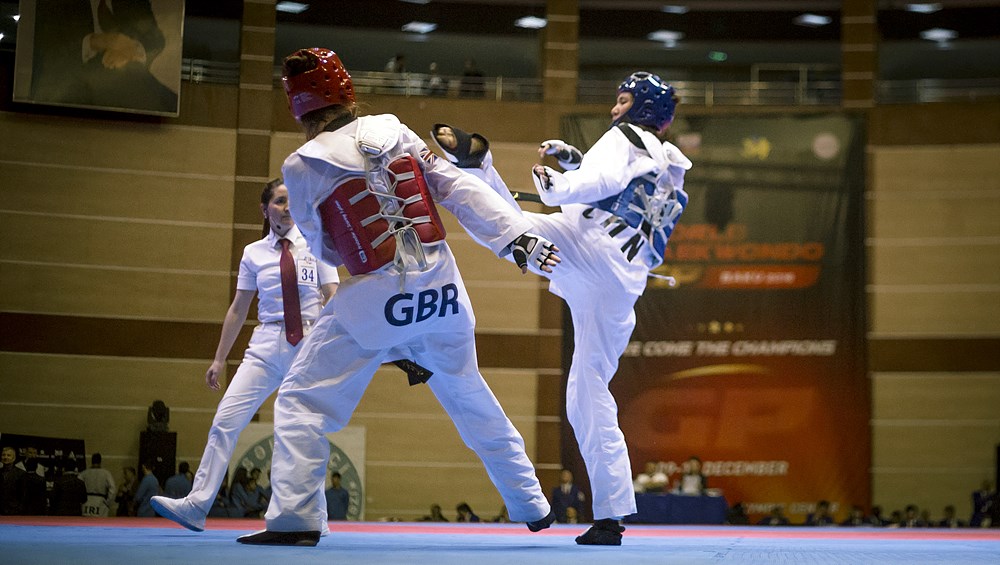 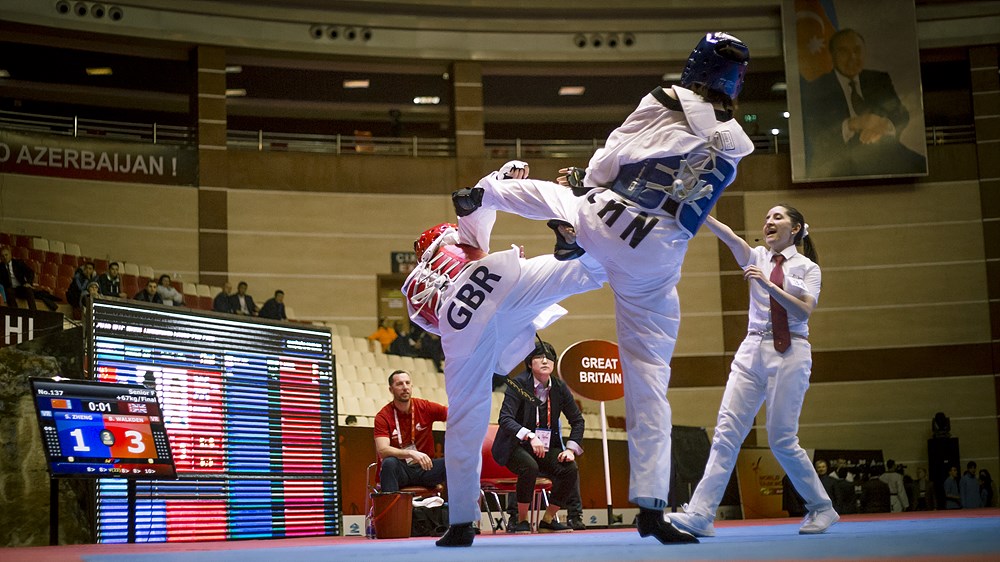 ▲ Match for the Female +67kg cateogory 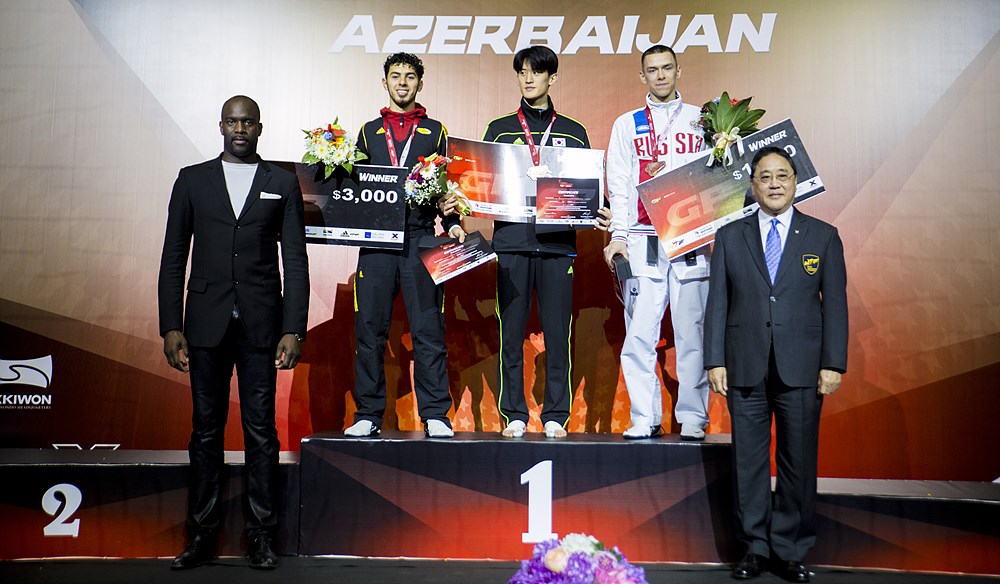 The male -68kg is arguably the most competitive category in the game and the first semi was no disappointment: In one of the fiercest matches of the evening, Dae-hoon Lee of Korea took out Konstantin Minin of Russia, 2-1. In another very exciting match, the crowd-pleasing Alexey Denisenko of Russia was beaten by the very fast, very lively and very smart Jaouad Achab of Belgium, 5-4, in a match marked by tactical face offs interspersed by flurries of fast ‘n furious techniques. 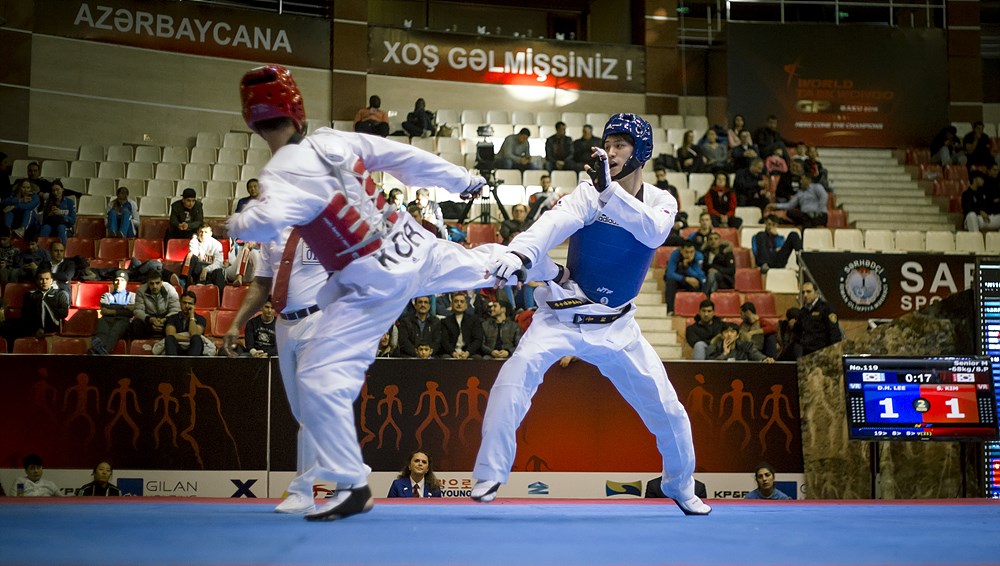 The gold would be contested by Lee and Achab, two fighters who both know and respect each other. They are both excellent technicians with wide arsenals. While Lee has the height advantage, Achab is faster. From the opening bell, Lee got straight down to business with a lightning ax kick that Achab did well to bob away from. The Belgian countered with a running barrage of multiple round kicks, then tapped first blood with a twist kick to Lee’s body, going 1-0 up.  In the round’s dying seconds, Lee evened the score at close range, 1-1.

As the second got underway, Achab surged across the area with a round kick attack to the head, then a blitzkrieg of ax kicks and round kicks that drove Lee off the mats. Some superb techniques were on display as Lee counter-attacked; this match was simply too close to call.  Lee scored to the body and Achab, in a remarkable show of sportsmanship, clapped it as the score went 2-1. Round 2 ended with Lee ahead. 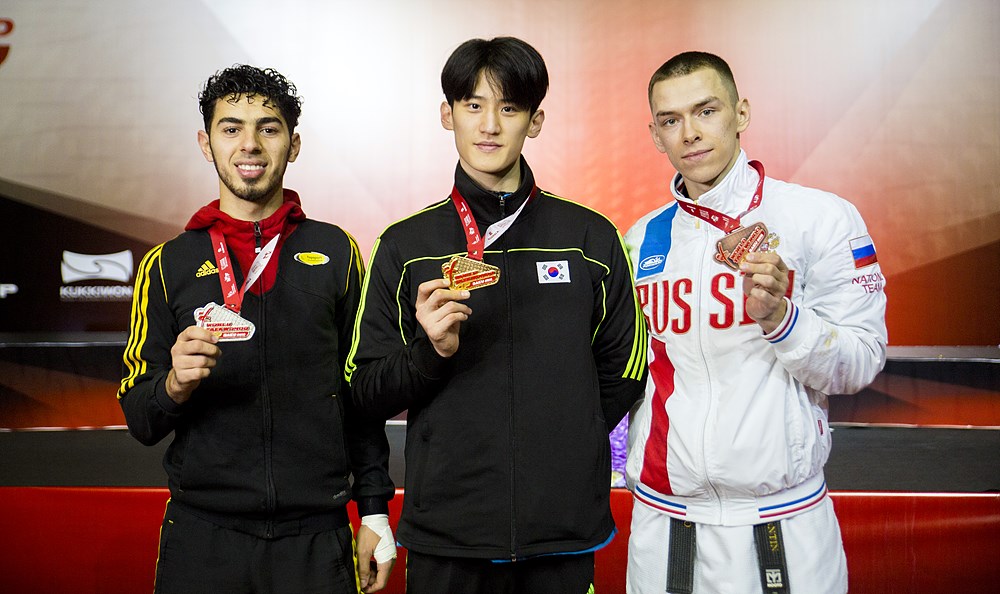 In the third, Achab fired an awesome high kick, Lee stumbled, and Achab’s coach appealed. It was rejected. Action resumed with yet another combination attack by Achab - multiple spins and a final back kick the drove Lee out of the area and levelled the score to 2-2.  Achab followed that with a burst of round kicks that failed to score. Achab again stabbed forward as the clock counted down the last 30 seconds. Achab scored with a punch, 3-2; Lee returned fire with a kick to the body, leveling the score, 3-3. Ten seconds remained. In a flurry of techniques that were too fast to call, the board went to 4-3, then 5-3 to Lee. The Korean won the gold, the Belgian the silver, but the real winners were the crowd, who had witnessed a duel of masters wielding speed and technique in a kaleidoscope of taekwondo.

“That was very exciting, very fast, very even!” enthused WTF Technical Committee Chairman Jung Kook-hyun, who had watched from ringside. “Until the finish, who knew who would win? Very dramatic!”

The bronze medal match was the second Russian civil war of the evening as Minin took on Denisenko. The fight was lackluster for the first two rounds, but heated up in the last seconds – and went to golden point. Minin won the point and the bronze.

The day’s fights concluded the two-day Grand-Prix Final. However, taekwondo’s end-of-year run in Azerbaijan is not over yet. On the 11th, the global taekwondo family honors its top players at the 3rd annual Gala Awards and the calendar in Baku wraps up with the two-day World Taekwondo Team Championships, which end on the 13th.