BAKU, Azerbaijan (Dec. 9, 2015) - On the first day of the 2016 World Taekwondo Grand-Prix Final, Charlie Maddock of Great Britain, Milad Beigi Harchegani of Azerbaijan, Hyeri Oh of Korea and Carlos Navarro of Mexico captured gold medals in the last elite tourney of the year, on the coast of the Caspian Sea.

There was hurricane force action in the Sarhadchi Olympic Sports Complex in Baku – “The City of Winds” – as the event, which pits 118 athletes from 41 nations against each other for medals, prize money and early ranking points ahead of the 2017 fighting season. The 2016 Grand Prix Final is the premier meeting for taekwondo’s top fighters since the Rio Olympics.

Silvers went to fighters from Korea, Egypt, Chinese Taipei and (again) Korea. Bronzes were won by Russia, Russia (again), Sweden and Korea. Despite some uneven bouts in the preliminaries and semifinals, all the finals proved to be scorchers. 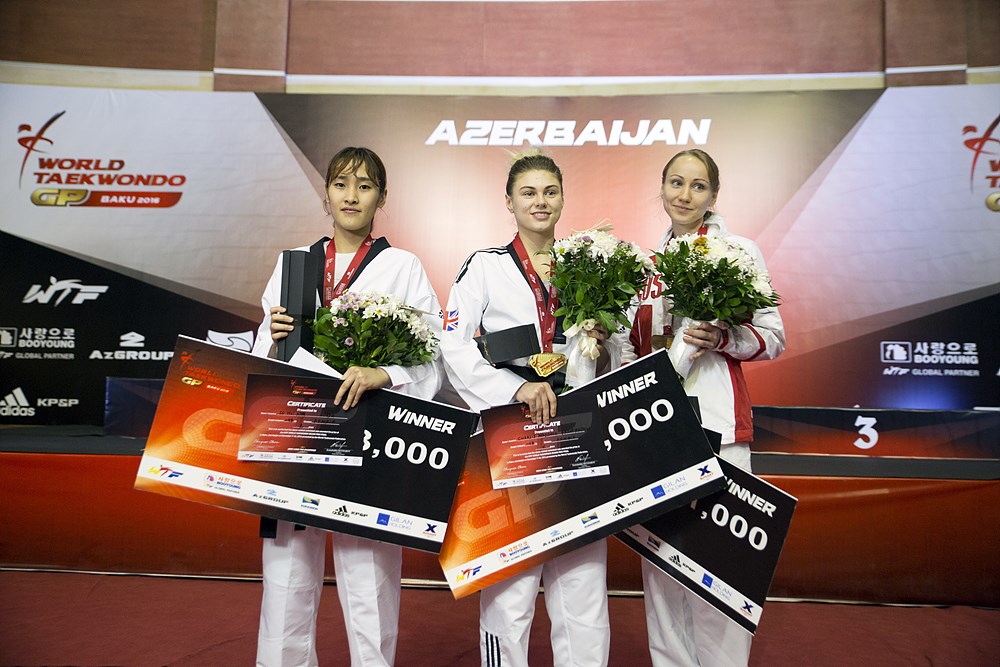 In the semi-finals, Rio 2016 Olympic gold medalist So-hui Kim of Korea had beaten Svetlana Igumenova of Russia in a disappointing match that ended scoreless; Kim won it on superiority in golden point. Charlie Maddock of Great Britain had also defeated Iryna Romoldanova of Ukraine in golden point. However, these mediocre results lined up a final that promised a clash of styles: Kim is a master counter-kicker, with a wily tactical game and excellent footwork; Maddock is a powerful, aggressive fighter, with a never-step-back, take-no-prisoners style.

As the buzzer went on Round 1, Maddock - as anticipated - surged out, fighting strongly and immediately pressuring Kim. Kim fought back gamely, fighting a more active fight than she had showed earlier in the day; she appeared to have decided that she would not let Maddock play her customary steamroller game. It was a lively round - but ended without a score. The second round kicked off with Maddock not at all intimated by the Olympic champ. Kim reverted to her normal, evasive style leaving Maddock to expend energy firing multiple kicks. But it was Kim, fighting economically, who looked more dangerous – failing to score by a whisker with two head shots. Round 2 ended scoreless. 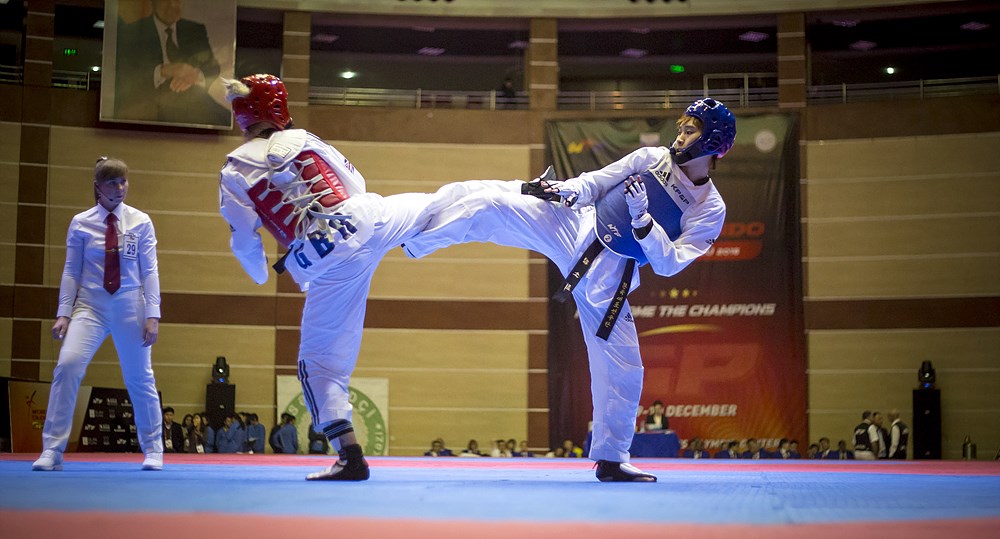 Round 3 continued in the same vein with plenty of kicking, but no contact and no points. With just 12 seconds on the clock and the board empty, Maddock riposted a Kim attack with a reverse spinning turning kick to the head - then swung back with a round kick, without putting her foot down: An extraordinary display of leg control, brilliant timing and spectacular technique. She went 4-0 up. In the final seconds Kim, a cagey, tactical fighter, was powerless to riposte. The match ended with a well-deserved 4-0 win for the British girl who is clearly charmed in Azerbaijan – her previous big win had been the European Games in Baku. Kim had to be content with silver.

For bronze, Igumenova of Russia fought Romoldanova of Ukraine. The taller Russian girl showcased some lively lateral footwork and was the more active of the two, holding off a last-minute blitzkrieg and winning bronze in convincing, if low-scoring style, 1-0. 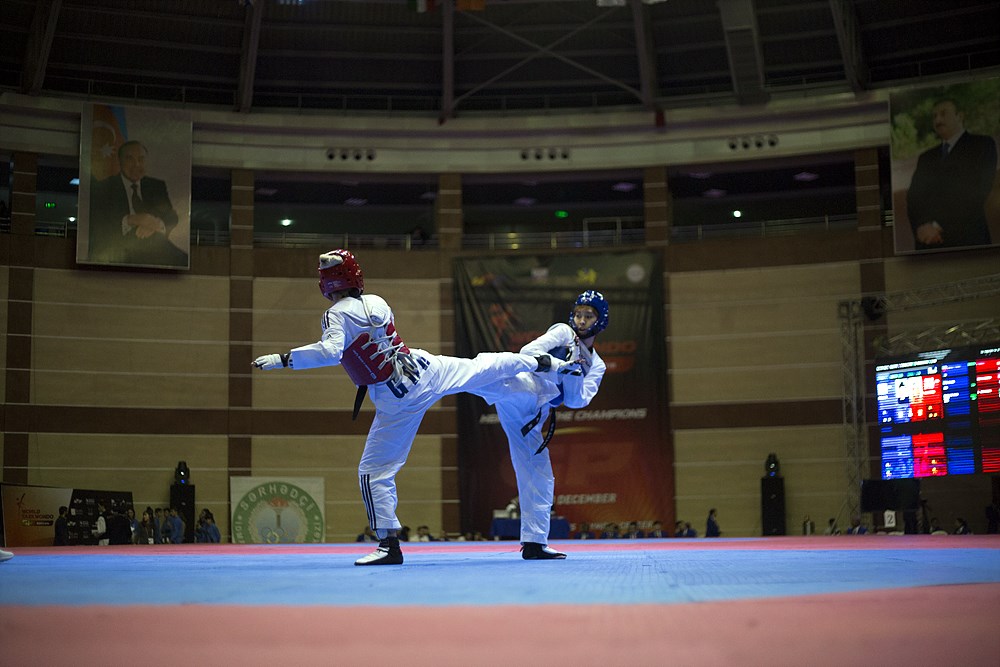 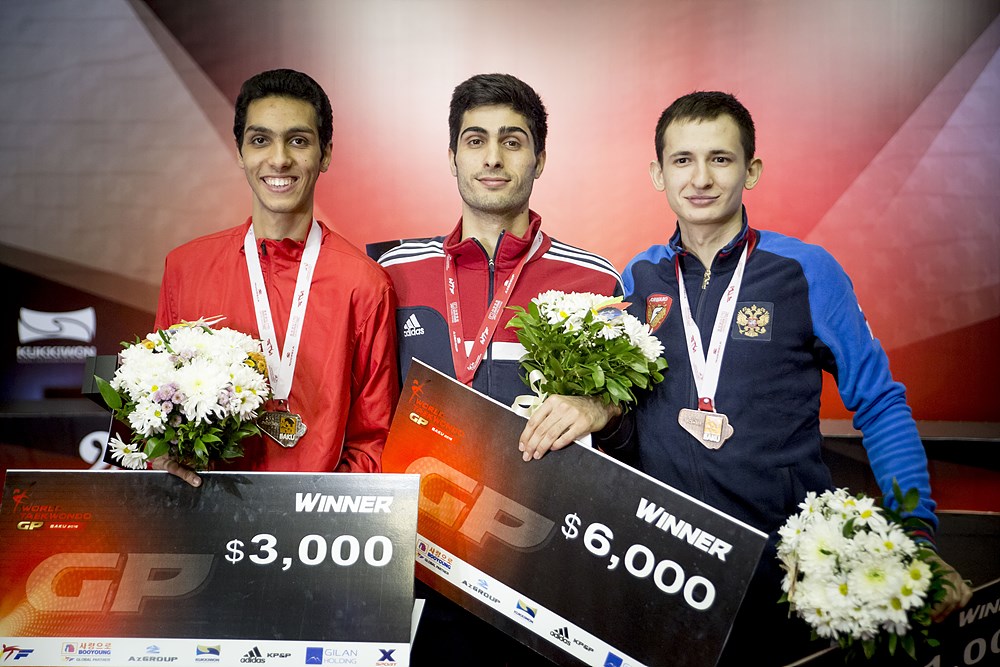 There was everything to fight for in the Male -80kg category: Neither the Olympic gold medalist nor the silver medalist was fighting. The final pitched Milad Beigi Harchegani of Azerbaijan - one of the highest scoring fighters on the face of the planet; in the semis he had dispatched Rene Lizarraga of Mexico 18-0, winning in the second round on point difference – against Seif Eissa of Egypt, who had earlier beaten Russia’s Albert Gaun, 7-5.

With both lads being tall and long-legged, feet flew from the outset. The super-scoring Azeri did not have his customary height advantage but exhibited masterly ring craft, maneuvering the Egyptian backward and firing kicks from extraordinary angles. He was not getting points but the crowds were loving it every time his leg left the mats. In a flurry, Beigi Harchegani went one point up, which ended the round.  It had appeared that he was not going to get things all his own way, as he had for most of the day, but he looked more relaxed in the second round, firing sky-high ax kicks and round kicks in a display of picture-perfect form. Then, in a clinch, he scored with a crescent kick to the head, igniting the crowd as he went 4-0 up, then 5-0 up.

The referee did well to keep the action under control as the Azeri forced the Egyptian to the edge of the mat and unleashed an explosive flurry of ax and round kicks. The Egyptian ducked under, trying desperately to take cover from the storm. Slow-motion replay showed the dexterity and beauty of the Azeri’s play, such as unleashing a perfectly vertical ax kick then firing a round kick - without dropping his foot. Beigi Harchegani had found the range, ending the second round 9-0 up. 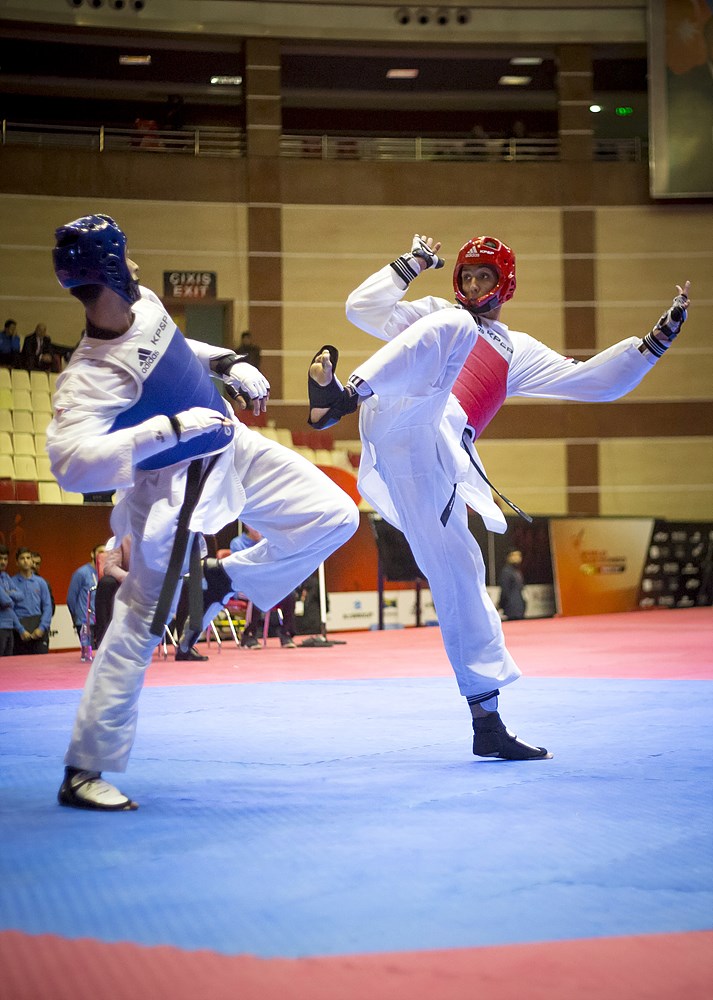 Still, Eissa was full of fight. In the third, he came out with a jumping ax kick that did not land. The Azeri’s defensive skill was now on show as, with control and composure, he ducked away from a spinning heel kick. Then he landed yet another head shot to win gold by 12-point gap. In the person of Beigi Harchegani, pinpoint accuracy, superb technique and inhuman flexibility are married to a perfect physique – he is most definitely a man to watch, though his speed is such that slo-mo replays are essential to appreciate his excellence. Kudos also must go to Eissa, who took sliver, for withstanding the onslaught for so long.

In the bronze medal match, Lizarraga took on Gaun. The Russian looked far more in control than he had in the semis, taking the bronze 10-3 in an exciting fight that saw both fighters unleashing multiple techniques, but with the Russian proving the master of distance and accuracy. 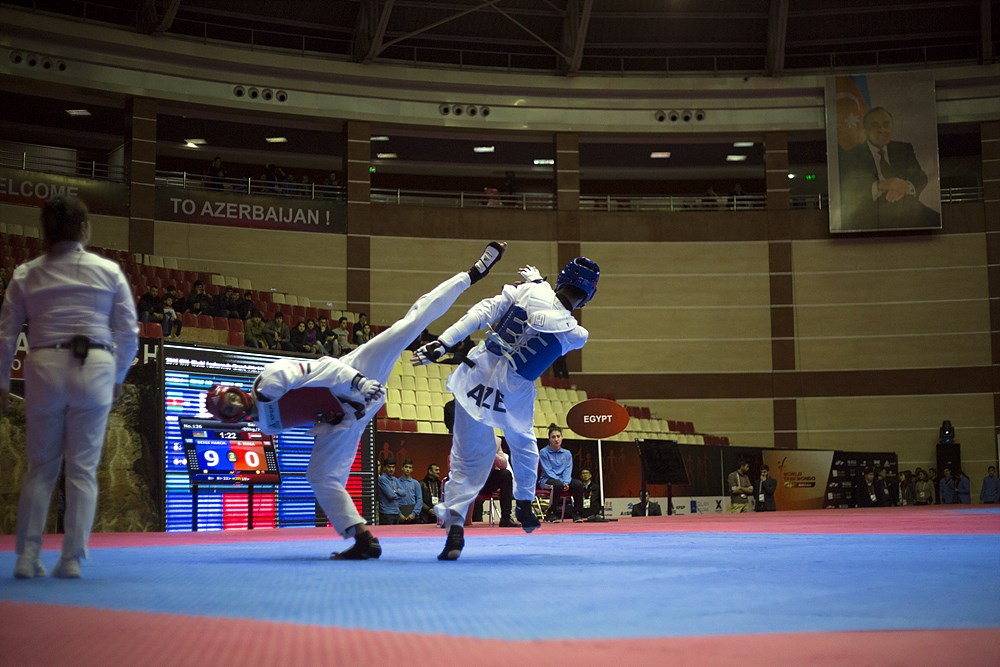 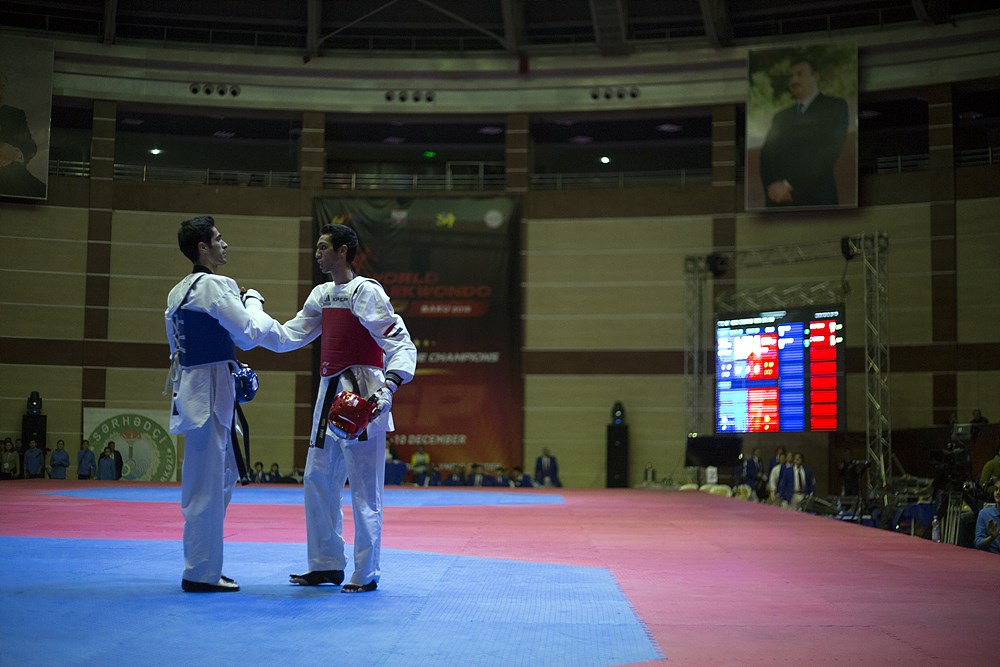 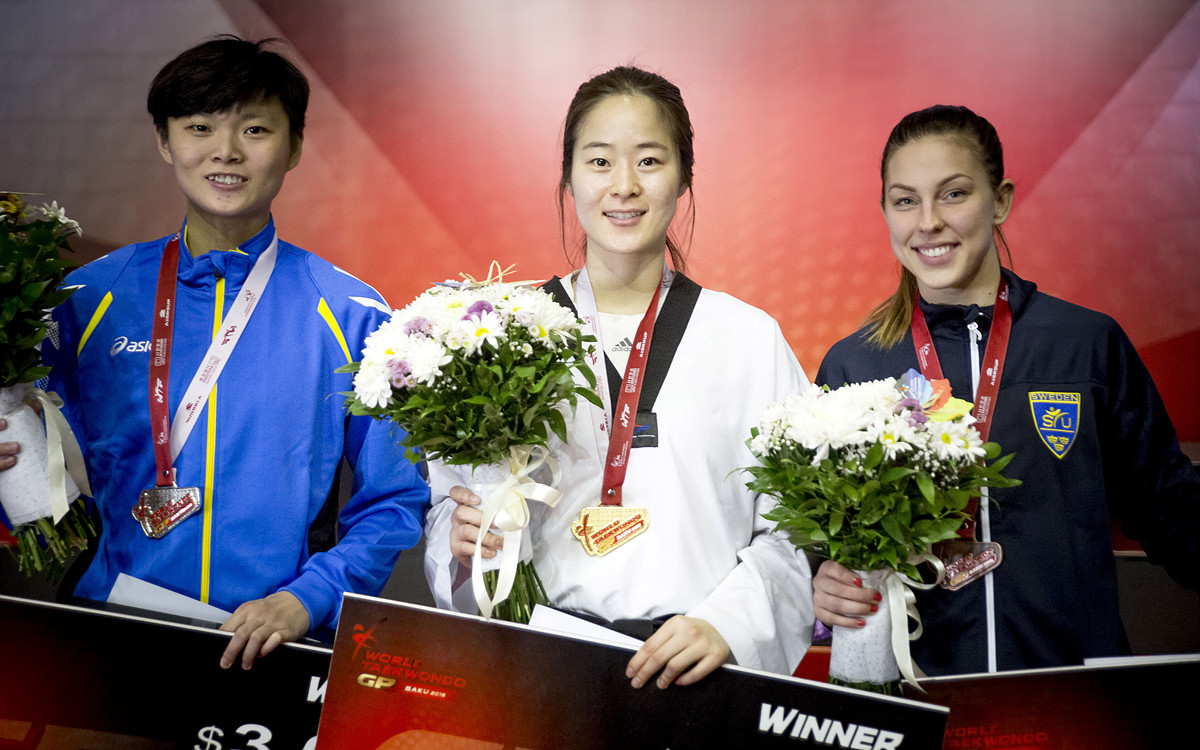 In the semis, Olympic gold medalist Hyeri Oh of Korea took out Elin Johansson of Sweden, 6-0, in professional, economical style. Meanwhile, Chia Chia Chuang of Chinese Taipei had eliminated Petra Matijasevic of Macedonia after a 1-1 match in golden point. So for the finals, these two experienced Asian warriors would go to war for the gold, with Chuang out for vengeance: Oh had eliminated her in Rio.

From the beginning, Oh hung back, fighting with economy, daring her opponent to attack and feinting with her arms. Both athletes were feeling each other out, trying to close the range; the Chinese-Taipei girl probing with kicks, Oh trusting to her footwork and only raising her leg for committed attacks. Things heated up, both players firing flurries, but it was Oh who was looking confident. Oh ended the round 1-0. 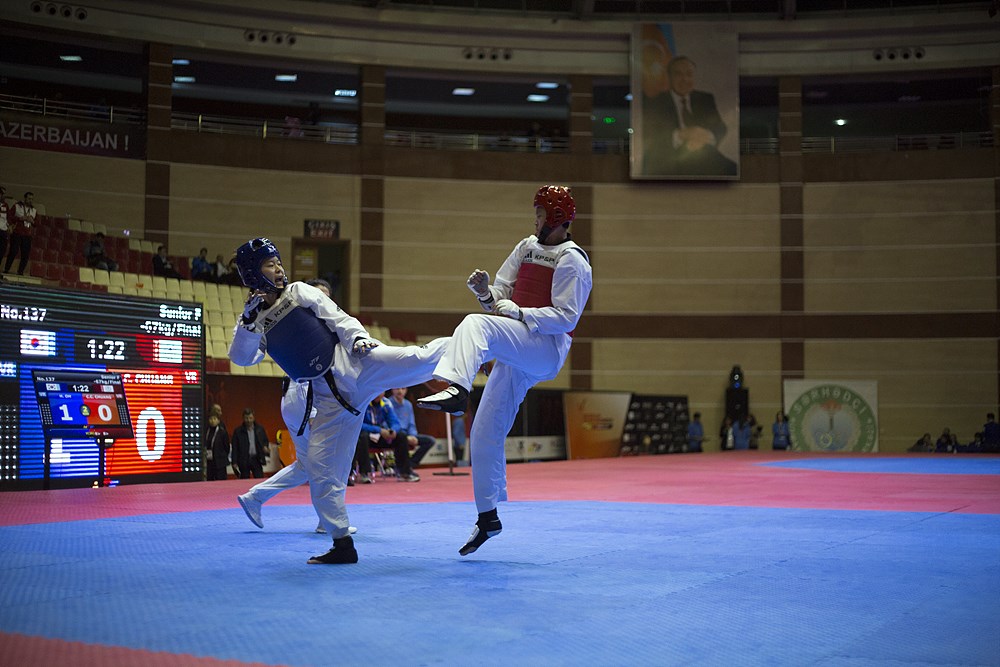 Again, in Round 2, Chuang was firing more kicks but Oh was gliding smoothly in and out of range. Things settled down with both girls seeking to close the distance. Chuang looked frustrated; Oh looked cool. Then something happened that changed the fight dramatically. Chuang connected with a round kick to the side of Oh’s head, but suffered a powerful back kick to the thigh from Oh that dropped her. The board was now 3-1 to Chuang, but the player from Chinese Taipei was on the floor. The doctor was called and treatment given: she had one minute to recover. Action resumed. Oh now had to do the work and attacked, but the round ended 3-0 to Chuang. The question hanging over the final round was whether Chuang’s battered thigh would carry her through. 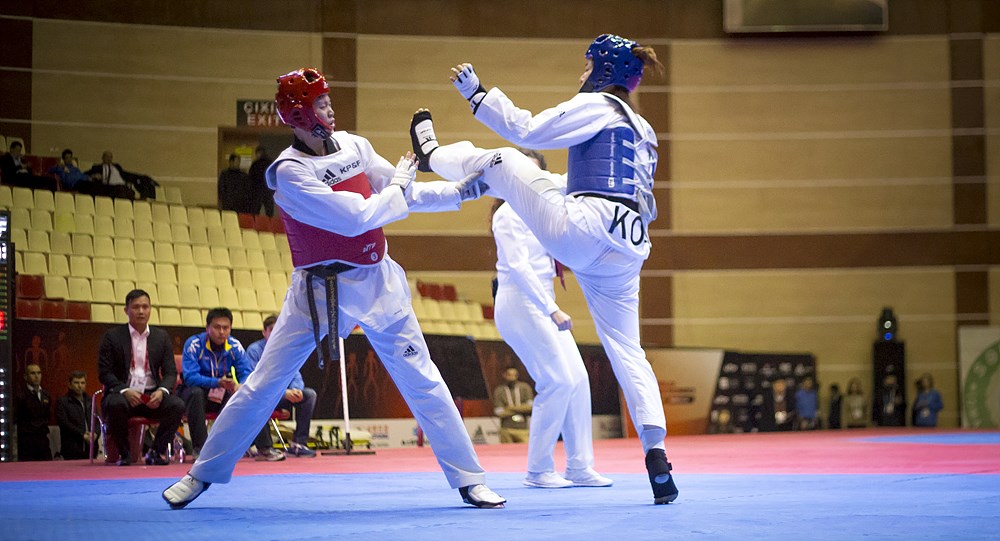 As the third got underway, Oh naturally sought to take advantage. Chuang played on the back foot, keeping her front leg up as guard, trying to keep Oh at distance and clinching when necessary. Oh went onto the offensive with some powerful shots, but then in a clinch scored two out-of-nowhere head shots, taking the board 7-3. The Korean followed with another point, going 8-3 up. With 13 seconds left, Chuang was clearly struggling. It ended 8-4 to the Olympic champ. It had been a professional performance by Oh, pulling a lead out of nowhere exactly when she needed it, and a gutsy performance by Chuang, who fought a painful fight to take a well-deserved silver. 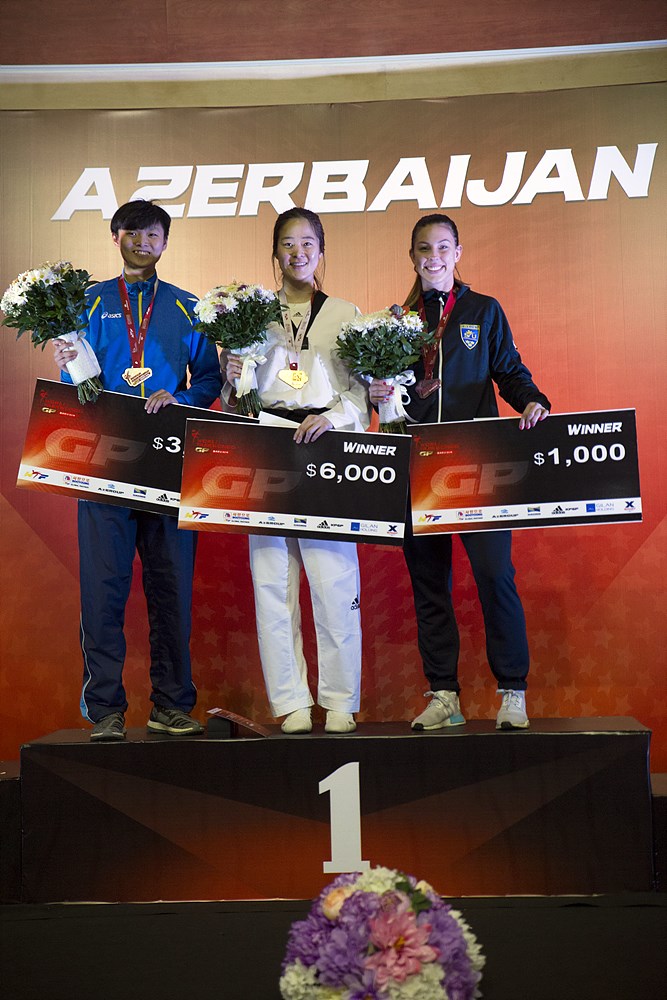 In the bronze match, Johansson of Sweden and Matijasevic battled to a 1-1 draw, then the Swede won it in golden point on superiority. 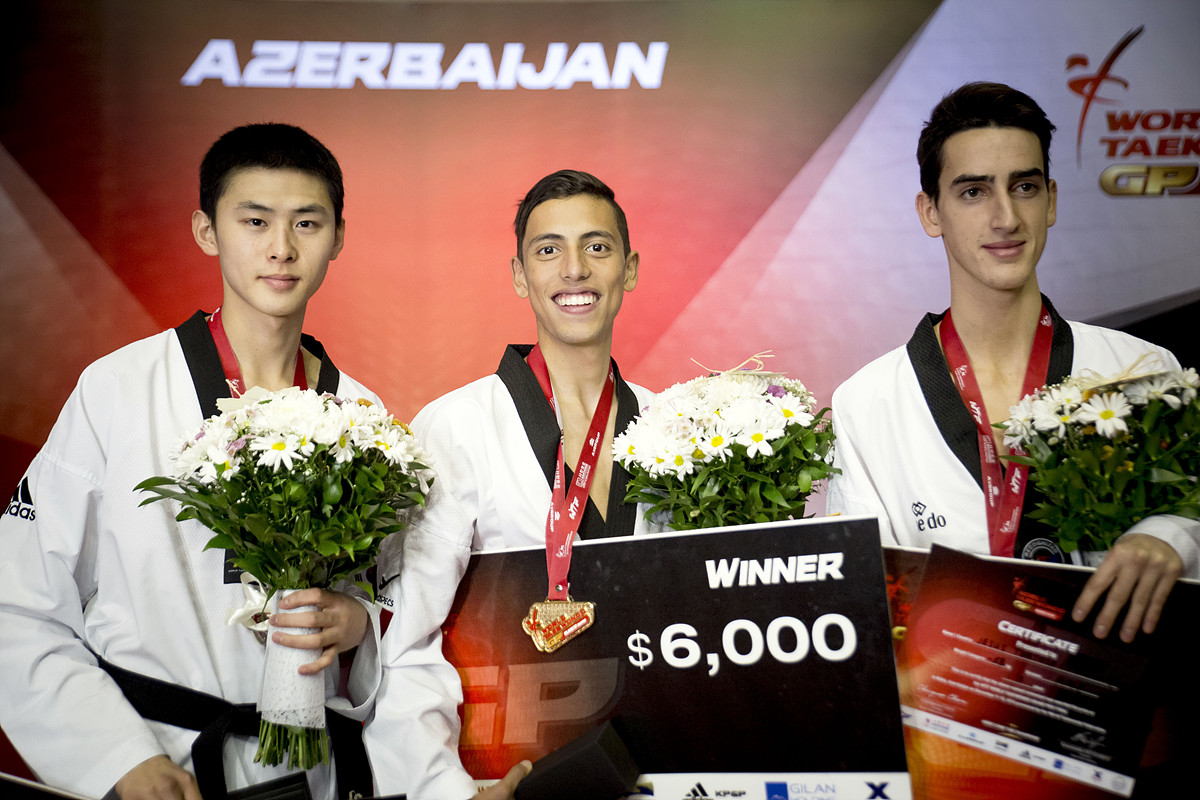 In the semi-finals, Tae-hun Kim of Korea beat Jesus Tortosa Cabrera of Spain 3-2 in a close, bruising encounter. In one of the most entertaining matches of the day, Carlos Navarro of Mexico took out rising young gun Salaheddine Bensaleh of Belgium. That left the experienced, ambidextrous and popular Kim to battle the fiery Mexican, who has an attacking style and wields a killer spinning back kick. It promised to be an entertaining match up – and while it lived up to its promise, proved a highly unusual fight.

Both fighters started fast, exchanging kick-for-kick as they tried to dominate the center of the ring. This was stylish stuff, with Kim shooting powerful looking round kicks and Navarro unleashing a whiplash reverse turning kick that – had it connected – would have severed Kim’s head. Remarkably, the round ended scoreless. Round 2 saw more tactical play in center of the mats and again the Mexican firing off deadly looking techniques. Both were fighting with no-holds-barred power kicks, but neither was landing. At the end of the round, the board remained stubbornly empty, in defiance of the quality of play from both fighters. 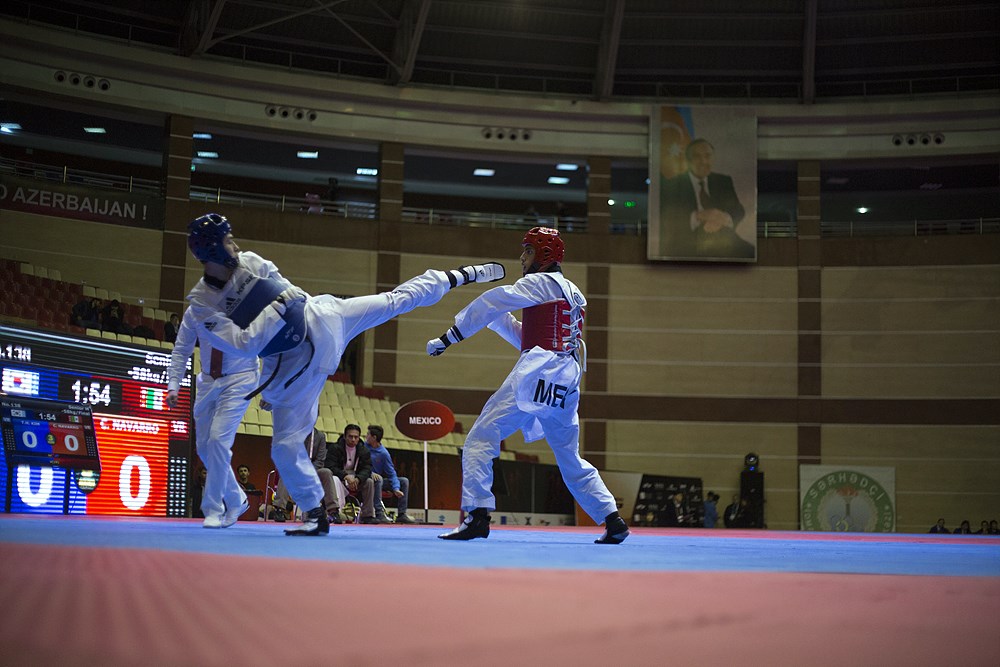 All was to fight for in the third. There were some explosive flurries as the Korean tried to pressure the Mexican back. Kim tried jumping techniques, but Navarro was fast on his feet, maneuvering out of range. This was an all-action fight that just would not move beyond nil-nil. In an era of taekwondo when light, front-leg kicks are king, both lads were firing power kicks off their back legs. It was entertaining stuff – regardless of the deep-frozen scoreboard. So, things went to golden point. 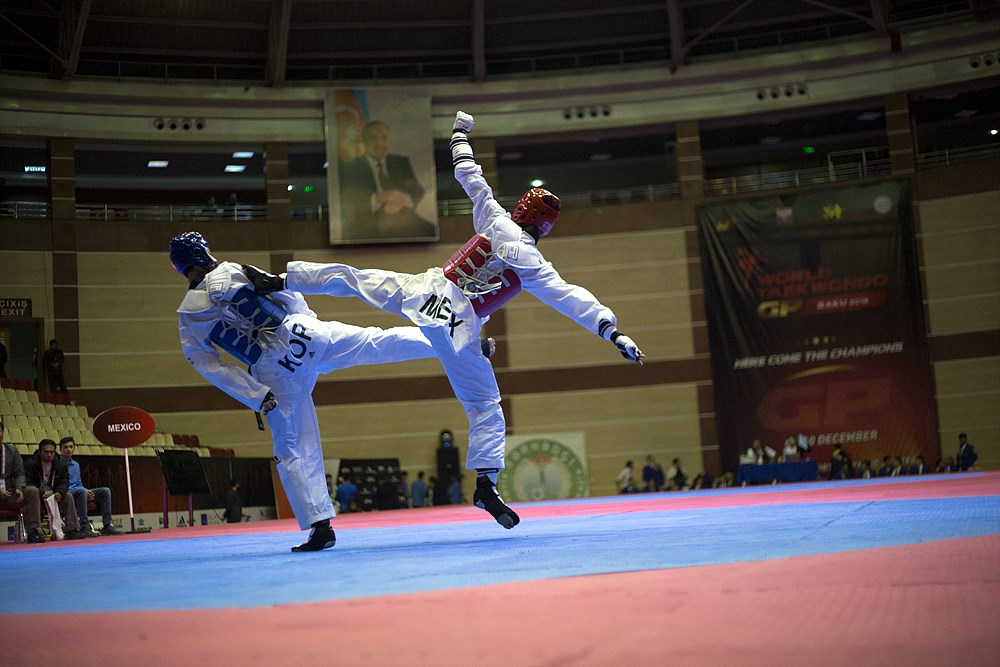 Prior to the golden point round starting, the referee – presumably as puzzled as the audience by the lack of score - called for test kicks on the PSS. The gear registered the kicks, so action recommended. Seconds in, Navarro tried a back kick, missed - and fired a picture-perfect round kick to the body for the point and the gold. Kim can surely take full pride in silver; this reporter cannot recall seeing such an entertaining but low-scoring match.

Cabrera won the bronze in a tough and entertaining match against Bensaleh, taking the medal 4-3.

Action continues tomorrow, where the remaining four Olympic weight categories will be contested. On the 11th, the global taekwondo family honors its top players at the 3rd annual WTF Gala Award. The calendar in Baku wraps up with the two-day World Taekwondo Team Championships, which end on the 13th. 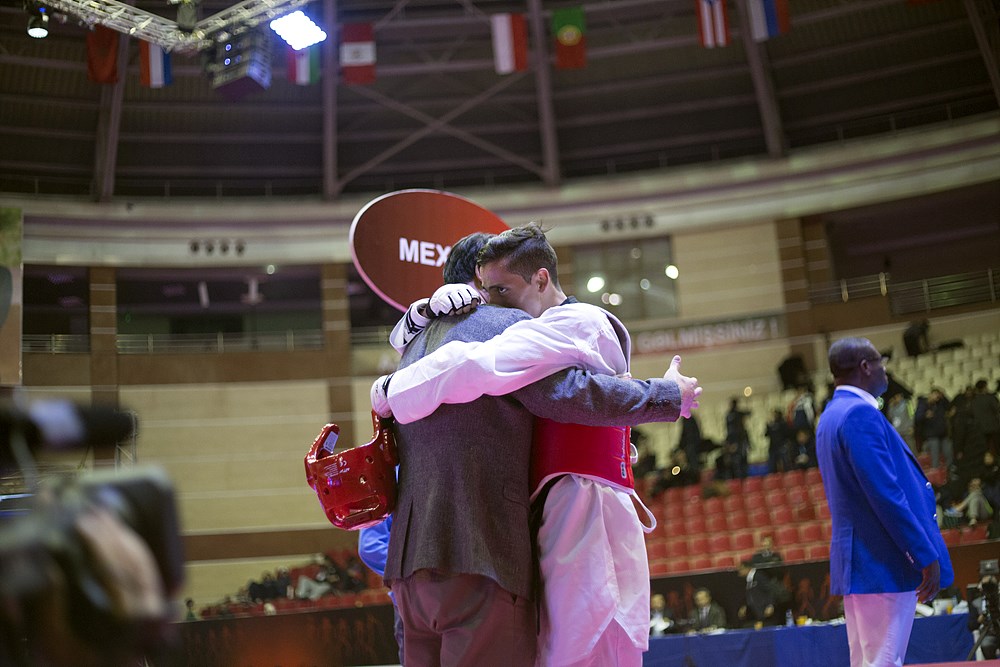