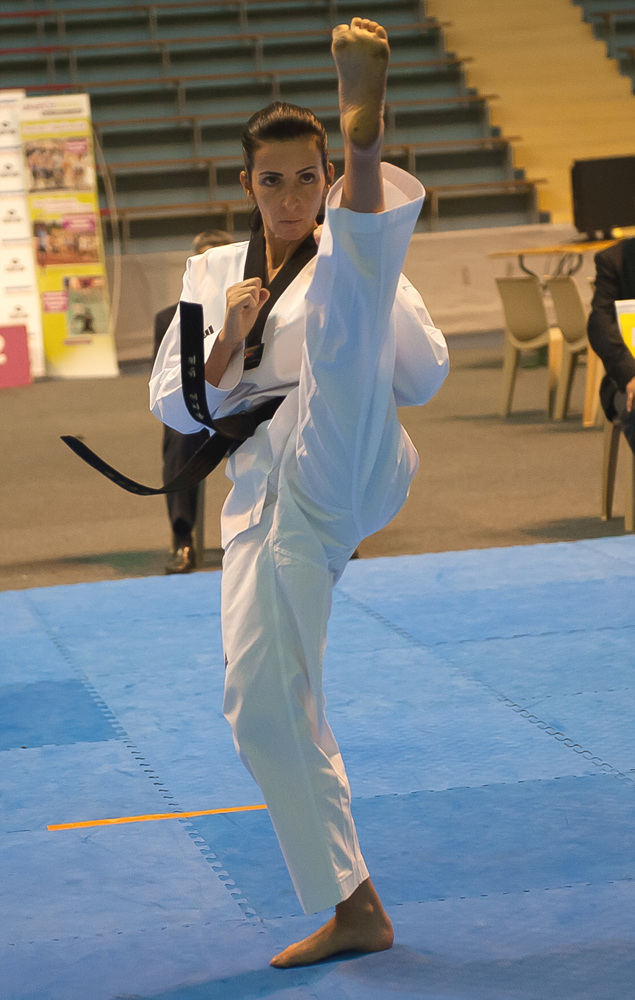 (October 14, 2016) It was a heart-breaking piece of bad luck, a soul-destroying attack of misfortune.

“I arrived, as the other 800 competitors did, I arrived in Lima with joy, pride and the desire to give the best of myself,” said Israeli National Team Member Sylvie Rouquie.” But on the eve of the competition, I got injured.”

Rouquie, a 54-year-old lawyer and university professor, had travelled more than half way across the world to compete in the 10th World Taekwondo Poomsae Championships, held in Peru’s capital.  She already knew a thing or two about hardship. Taekwondo is an athletically demanding sport, one customarily played by youth in their teens or early 20s. Rouquie had taken it up at the age of 37, alongside her 6-year-old daughter.

Now, her dream of competing at the world’s highest level lay in tatters. “I immediately understood that the intervention of a doctor of osteopath would not solve anything,” she said. “But as it is difficult to give up, I went in search of an unlikely medical solution…in fact it was not a doctor I was looking for, but a magician.”

In this kind of story, it is often the case that a magician – a faith healer, perhaps; an alternative therapist; even a martial arts master with mysterious healing powers – appears from nowhere. He or she pulls off a minor medical miracle that baffles conventional doctors then disappears.

But this is not fiction - this is a true story. No magician appeared. No miracle took place. Rouquie was off the mats; sidelined; out.

“A very unpleasant feeling of failure and powerlessness invades you,” she said. “Even if you are supposed to have acquired a certain degree of wisdom, you are in fact, terribly disappointed and you find the situation unfair - you blame yourself for not having been able to prepare cleverly.”

Regardless, the competition got underway. Sidelined on the bleachers, a feeling of being “irretrievably punished” settled upon Rouquie. Watching the competition, she witnessed her most formidable competitor Yeong-ae Seo - a nine-time world champion– suffers a debilitating injury mid-performance, on the mats.

Her mind wandered. Rouquie recalled her own taekwondo odyssey. The years of demanding training. The black belt earned at age 40. The first national competition at age 42. The first international competition at age 49. She recalled the guidance she had received from her masters: Philipe Montosi, Moon-ho Lee, Ky-tu Dang. The recalled the endless daily grind of practice of taekwondo poomsae, chiseling away the inessentials “…in search of the accurate gesture”

Her mind settled. “I became aware – but a little late, I admit! – that the daily practice of poomsae, the everyday exercise of will power, had offered me a second, unhoped-for life,” she said. “It was filled with adventures as well as strong friendships – and some disappointments!”

Given that she was unable to compete – but given that she had crossed continents and oceans to be in Peru - she decided to leave the arena. She caught a plane and then a train to visit the country’s most iconic destination: Macchu Piccu.

She made it to the summit of the 15th-century Inca citadel, perched on a mountain ridge 2,430 meters above sea level 0 a journey few are privileged to make. In that wondrous location - by a remarkable coincidence - the injured taekwondo athlete met another visitor: None other than WTF President Chungwon Choue. It was he who encouraged her to tell her story.

“In martial arts, it is often considered that the path travelled is more important than the goal,” she mused. “My path led me from Toulouse, to the ‘Hwarang Academy’ of Jerusalem, to Machu Picchu.”

Despite the cruel disappointment of being unable to compete and the pain of injury, Rouquie’s long, long journey had, in the end, proved worthwhile. Instead of a medal, she had had an adventure, travelled to a location few will ever be privileged to visit, and found a friend.

“I am not a wise person, and at 54, the path is still long,” she said. “I wish all champions - including those who have only won a medal in their dreams; the young and the less young; the women and the men; the masters and the amateurs – to continue with conviction and passion the practices of poomsae.”