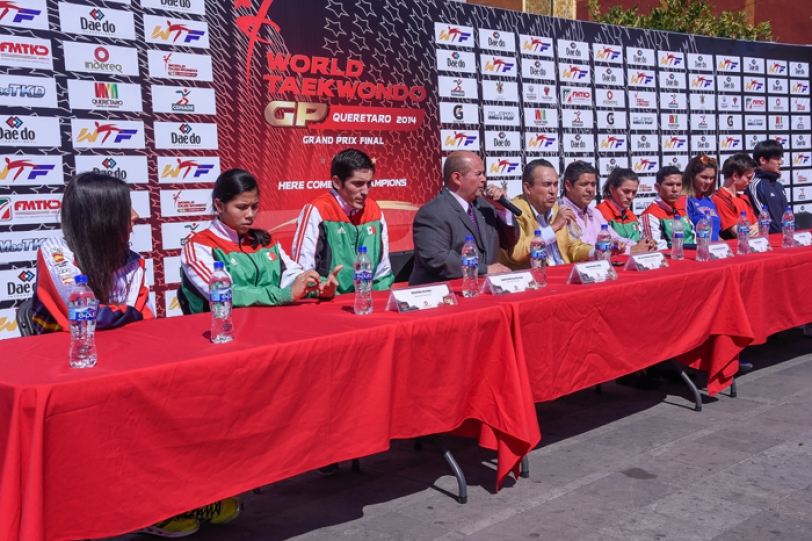 QUERETARO, Mexico (December 2, 2014) – The world’s top taekwondo athletes will be battling it out over the first week of December in this Mexican city as an extravaganza of foot fighting gets underway on  Wednesday (December 3): the Grand Prix Finals, followed by an inaugural WTF Gala Awards Dinner; and then the World Cup Taekwondo Team Championships.

Queretaro, an old silver mining city northwest of Mexico City and now a tourist resort famed for its historic center, welcomes the World Taekwondo Grand Prix Final, which brings together 64 athletes from 27 nations including five male and three female Olympic gold medalists, on Wednesday and Thursday.

The city will then host the inaugural WTF Gala Awards Dinner honoring the sport’s top names, followed by the World Cup Team Championships on Friday and Saturday.

“It’s an honor to be here, with the best athletes, at this event,” said Juan Manuel Lopez Delgado, President of the Mexican Taekwondo Federation. He was speaking at an open-air press conference held in the city’s sun-splashed Constitution PlazaQualification points for the Olympic Games in Rio de Janeiro 2016 are up for grabs at the two-day event, the last fixture in 2014’s Grand Prix series. At the press conference, Delgado was flanked by Mexican taekwondo officials and competing athletes from the Isle of Man, Korea, Mexico, Serbia, and Spain.

Still, given the caliber of their opponents, even the sport’s top athletes attending the press event were cagey on their chances in the upcoming finals.

“I am very happy to be here, going in ranked Number One,” said Aaron Cook (men’s-80kg) of the Isle of Man, and one of the sport’s superstars, noted for his flamboyant technique. “But I will take it one match at a time and see how the competition unfolds.”

Another athlete commented on the elite level of the upcoming event.

“I have to say it is a big honor to be here now, one of the top eight athletes in the category - it is prestige,” said Serbia’s Milica Mandic (women's -67 kg), “I want good fights and fair play, but will take it step by step.”

The event will be followed by a gala dinner, in which attending officials, athletes and reporters will vote on the sport’s top athletes and referees of the year, an event designed to raise the profile of a sport which is massive in participation – it boasts some 70 million practitioners worldwide - but lags in global visibility compared to sports such as football, rugby, basketball and baseball.

“The gala event is a very good promotion,” said Serbian Coach Dragan Jovic, speaking on the sidelines of the event. “And the Grand Prix Final is also very good.”

“Taekwondo is basically an Olympic sport, so the expectations are amazing,” said Delgado. “The structure to help taekwondo in Mexico is developed, and support from the government helps, too.”