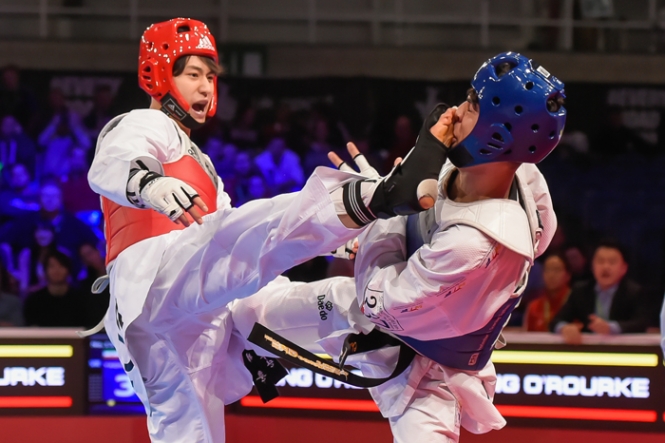 A total of 237 athletes from 56 countries are competing at the Manchester Regional Arena for top honors in the Manchester Grand Prix event, which will continue until October 18.

The action, in an illuminated center ring, with rolling LED ad boards showcasing sponsor brands, the Grand Prix slogan “Here Come the Champions” and the Olympic battle cry “#Every Road to Rio,” was enlivened by throbbing music and swirling, colored spotlights. The event was broadcast live to more than 90 countries.

In the finals of the men’s -68kg, Abolfazl Yaghoubijouybari of Iran - who had been fighting with wicked venom and accuracy all day, and who had earlier defeated taekwondo legend Servet Tazegul in an awesome golden-point match – took on Korea’s Dae-hoon Lee, who had previously dispatched teammate Hun Kim in the semifinal.

Lee started the match firing off a barrage of kicks, but it was the Iranian who found the range and took an early two-point lead. The Korean shot back, but Yaghoubijouybari soon regained his advantage with a perfectly placed punch, ending the round 3-1.

In the second, Lee regained his composure. In a masterly display of ring control, he, maneuvered his opponent to the edge of the mats and landed a head shot, putting him ahead. From then on, the match went Lee’s way, all the way. Yaghoubijouybari almost got back into the game with a spin kick, but Lee was giving the crowd a cool-headed display of technique, scoring to both body and head. The fight ended 16-7 to the Korean, whose relaxed demolition of the Iranian showed why he was named the WTF’s “Male Player of the Year” in 2014.

Servet Tazegul of Turkey and Hun Kim of Korea won bronzes in the same weight division.

Both girls started at a fast pace, firing head shots with real intent but failing to score. The match then settled down to a cagier tactical game, with the first round ending 0-0. In Round 2, Niare – nicknamed “The Abigator” by her teammates- drew first blood with a turning kick to the body. Then she landed the same technique again, ending Round 2, two points up. In the third, Tatar had to increase her work rate, but it was Niare who added to her score – landing yet another turning kick after evading a spin kick from the Turk.  Tatar launched an all-out offensive but had left it too late as the seconds ticked away.  Although she clawed back a point in the final seconds it was “The Abigator” who took match and gold, 3-1.

Chia Chia Chuang of Chinese Taipei and Hye-ri Oh of Korea went home with bronzes in the same female category.

In the male +80kg final, Dmitriy Shokin of Uzbekistan did battle with Rafael Castillo of Cuba. This was a clash of styles: The powerful Uzbek is a master front-leg and fist fighter, while the leggy Cuban is a power kicker with a significant height advantage. Both heavyweights came out fighting, launching kicks landing with shock impact, with the Cuban looking more flamboyant. But the PSS was not registering, and the round ended scoreless. In Round 2, Shokin took center ring and gave no ground to Castillo, who was trying to land head kicks. Castillo scored the first point, taking the second round 1-0.  In the third, the Uzbek chased the Cuban out of the ring for a penalty, but was not landing any kicks. Then, in virtually the last second, the Cuban went down for another penalty, evening the score to 1-1.

So it was golden point. At the outset, the Uzbek suffered a penalty for turning his back against one of the Cuban’s onslaughts. Castillo seemed to be landing body kicks, but the PSS was not registering. Shokin landed a punch – but again, no score.  The two men fought into close range then Shokin unleashed another punch and that was it: a gold for the Uzbek.

Arman-Marshall Silla of Belarus  and Omid Amidi of Iran had to be satisfied with bronzes.

The second day of the competition, on October 17, will feature three weight divisions: the women's -57kg, the women's +67kg and the men's -58kg.