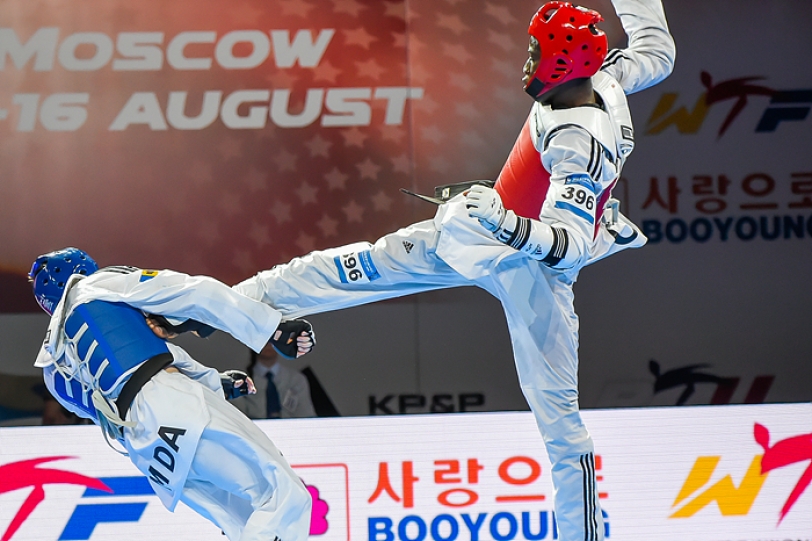 In the female -49kg final match, which took place in Moscow’s Dinamo Krylatskoye Gymnasium, Korea's So-hui Kim took on China's Zhaoyi Li. The fight was a tactical one, with both girls seemingly unable to find the distance, but in the end, it was Kim's superior kick placement that gave her a 3-2 victory despite a late challenge from the Chinese.

In the men's -58kg division, Iran's Farzan "The Tsunami" Ashour Zadeh Fallah, one of the most dominant fighters on the circuit, took on Mexico's Carlos Navarro. The match was almost point for point, until the Iranian pulled ahead in the final round, leading the Mexican to uncork a down-to-the-wire  series of spinning kicks from the very edge of the mat. But it was "The Tsunami" for the victory, taking the final 8-5 for the gold medal after an action-packed and highly entertaining fight.

The bronzes went to Germany's Levent Tuncat and Korea's Tae-hun Kim in the male -58kg category.

In the men's -80kg category, Cote d'Ivoire's Cheick Sallah Cisse did battle with Moldova's Aaron Cook in the final match. Cisse, ranked 23rd in Olympic ranking, advanced to the final as his semifinal opponent, the United States' Steven Lopez, withdrew from the semifinal match due to injury.

As the final got underway, Cisse drew ahead, fighting strongly. Cook - who had had a challenging fight against Mali's Ismael Coulibaly in the semifinal, during which he dropped Coulibaly in the final seconds with a spectacular head kick that won him the applause of the stadium - looked exhausted.

Even so, with Cisse ahead on the scoreboard, Cook, with vocal encouragement from the crowd, let fly with a series of the spinning kicks that are his trademark. However, they failed to connect, giving Cisse the match - and the gold medal - 11-4.

In a post-match interview, Cisse said that the victory over Cook was sweet revenge, as he had previously lost to the Moldovan fighter, but also said he had been ready to fight Lopez, and was disappointed the American taekwondo legend had been unable to compete.

Mali's Coulibaly and the United States' Lopez shared the bronze medal in the male -80kg division.

Eight medals in four male and four female weight categories, as well as valuable ranking points in the run up to the Rio Summer Olympics 2016, are up for grabs in Moscow. It is the first Grand Prix in 2015.

Two weight-category competitions - the female -57kg and the male -68kg - will be contested on Aug. 16, the final day of the three-day Moscow Grand Prix event.