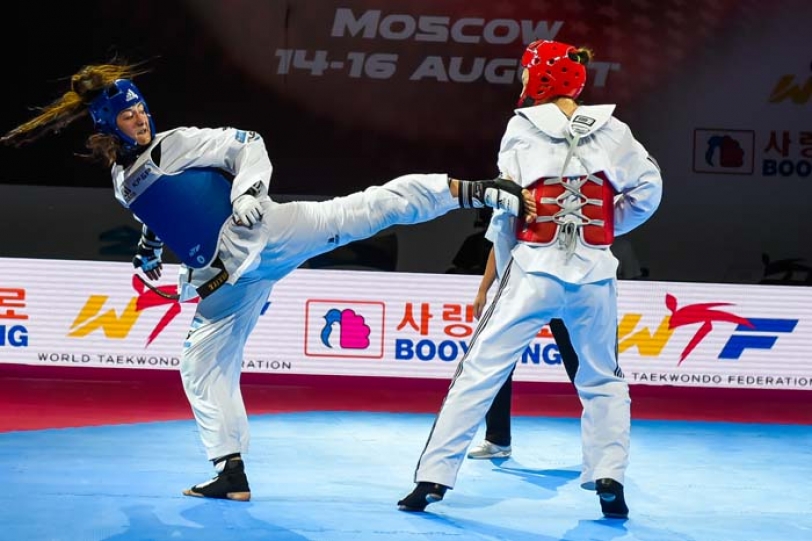 MOSCOW, Russia (August 14, 2015) – Korea, Turkey and Uzbekistan all struck gold on the first night of competition in the 2015 World Taekwondo Grand Prix Series 1 as the sport’s athletes started their Olympic journey in earnest in the Russian capital.

Korea’s Hye-ri Oh won the female -67kg class, while Turkey’s Nafia Kus captured the crown in the female +67kg class and Uzbekistan’s Dmitriy Shokin seized gold in the male +80kg. And in the latest marvel of Russian science, a taekwondo robot delivered the medals in the award ceremony.

Eight medals in four male and four female weight categories, as well as valuable ranking points in the run up to the Rio Summer Olympics 2016, are up for grabs in Moscow. The competition, in Moscow’s Dinamo Krylatskoye Gymnasium, runs over three days, from Aug. 14-16. It is the first Grand Prix in 2015.

The competition opened on a sombre note with the gathered athletes, officials and spectators observing a minute’s silence in remembrance of Chong-woo Lee, who passed away in Seoul, aged 88, on August 8. The late grandmaster, who served as the first secretary general of the WTF, had been a key pioneer of sportive taekwondo.

Then the action commenced.

The final of the female -67kg class with Korea’s Hye-ri Oh facing off against Canada’s Melissa Pagnotta was a high-scoring exchange, with both girls scoring tit-for-tat with both body and head kicks. At the end of the third, Oh was ahead but Pagnotta staved off defeat and evened the score to 7-7 in the dying seconds of the match, meaning that the contest would be decided by golden point. Both athletes, superbly conditioned, came out attacking furiously, but it was Oh who scored for Korea with a sickle-sharp turning kick to the body for the gold.

The women’s +67kg final, between Turkey’s Nafia Kus, ranked 18th in the world, and China’s Donghua Li, ranked 12th, was a surprise in itself: Most pundits would have expected a final showdown between the two eventual bronze medalists, world-ranked number two Gwladys Epangue of France, and current world champion Bianca Walkden of Great Britain. But Li was not in the slightest bit overawed and dispatched Epangue with a comfortable point difference, while Kus took out Walkden via golden point.

In the final, Kus drew first blood with a front-leg turning kick to the body; Li returned fire with an arcing ax kick. Then Li went down in a flurry, with Kus falling on top of her. A media was called: Li appearing to have suffered a twisted ankle. However, after some swift manipulation, she got back on her feet - but with Kus looking to take swift advantage. Both fighters showed a high work rate as they fought for the center of the ring, with Kus piling on the pressure. By the final round there was just a one point difference, but Kus extended her lead as Li started to lose her distancing. The match ended with a convincing 12-5 victory for Kus, but Lee had shown impressive courage in coming back from a bad fall.

A clearly delighted Kus was already looking to the future - to the September Grand Prix in Samsun, Turkey. “Inshallah, I will win in Sansum!” she said.

The men’s heavyweight final was a bruising affair with the tank-like Uzbek Dmitriy Shokin, the world-ranked number five, taking on Russia’s taller and whippier Vladislav Larin, the world-ranked number 13. 2015 has been a tremendous year for Shokin, who has won the three tourneys he has entered this year, including the World Championships in May. He showed his form in Moscow, opening the scoring with a punch but Larin, a home-town favorite, was unintimidated. Returning fire with a snappy front leg kick, he scored. The match settled down to both men sparring off their front legs, with Shokin varying his attacks with punches and spin kicks, which Larin countered with turning kicks off both legs. Shokin settled down and started showing off a bit of showmanship, while the “thwack” of his kicks impacting Larin’s body protector echoed around the stadium. The final result was in little doubt and the match ended with a definitive 9-4 victory to the Uzbek, who, in a post-match interview, dedicated his victory to Uzbekistan’s upcoming independence day. Larin was more down-to-earth, noting that being kicked by Shokin was “not particularly pleasant.”