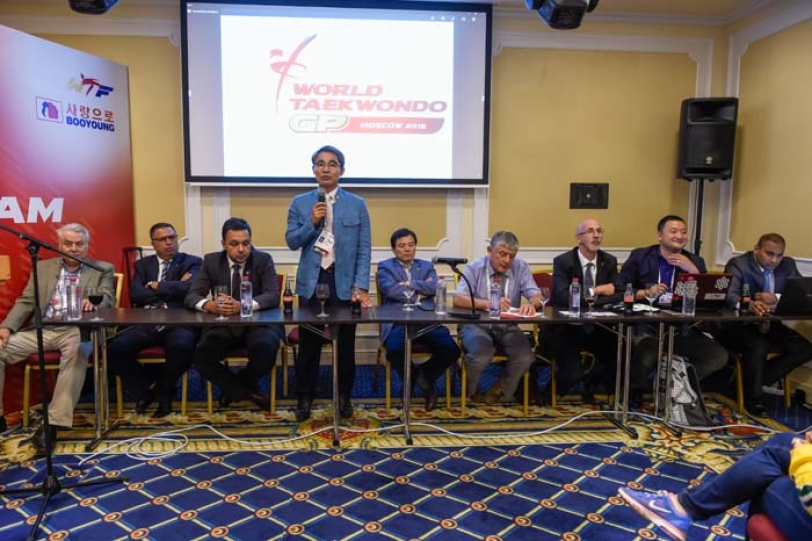 MOSCOW, Russia (August 14, 2015) - Jung Kook-hyun is one of the most famous practitioners ever to don a dobok. Now, the former four-time world champ has returned to the heart of taekwondo with the mission of taking the sport back to its martial roots.

We have all met them. They are the “armchair masters” of taekwondo: self-important men with inflated egos who demand deference from those of lower rank, but whose far-from-toned physiques indicate that they long ago gave up the practice of the art they claim to have mastered.

Jung Kook-hyun of Korea is not one of these men.

The former four-time world champion and current professor of sport combines the manners of a prince – he bows lower than those he is greeting – with an upbeat outlook – he flashes a ready grin and sports an informal style. And when you feel the grip in his handshake and see the bounce in his stride, you know that here is a man who is fit; a man who, despite his 54 years, has never quit training.

Jung grew up in Jeolla-do, the southwestern Korean province famed for its pungent cuisine, cheery attitudes and hardy men. Remarkably - given his later stellar competitive career in taekwondo - he was a reluctant convert to the way of foot and fist.

At middle-school, he was a keen volleyball player when, one day, his coach lined up his players by height and cut the line in half. Those on the tall side of the line made the team; those on the short side were dismissed. Jung fell into the latter category. That event prodded him toward a different sport – taekwondo. “It was a good decision by my teacher,” Jung reminisced, laughing.

Even so, he was hardly super keen. Less than a year after getting started, he was attracted to a new sport – wrestling. Only after his wrestling coach unexpectedly relocated to another school did Jung return to taekwondo and persevere with it.

Assessing his personal strengths as a fighter, he cites extreme physical fitness (which he maintains to this day) and explosiveness: “It is not simply muscle power, it is power through the neuro-muscular system – sudden power, all in one moment!” He also considers spirit of premium value. “Part of it came from my parents, part of it came from my own power,” he said.

The rest is history. Jung won the world championships in 1982, 1983, 1985 and 1987 and seized an Olympic gold in Seoul in 1988 - that pivotal year which was the “coming-out party” for the newly prosperous, newly democratized South Korea, as well as for its national sport.

Even so, his memories of 1988 are bittersweet.

“I never thought I could compete in the Olympics in a taekwondo event, I will never forget that, it was an honor,” he recalled. “But at that time taekwondo was just a demonstration sport, not a program sport and in Korea, the government, the media  - none of them were that interested.”

The “trembling shock,” KO-focused taekwondo of those days was a rougher art than its modern cousin and Jung believes it has lost something in the process. “Some changes have been good, some have been bad,” he said. “But frankly, I prefer my generation’s competition: It had more power, it was a more serious game!”

He stands up and adopts a combat stance to demonstrate how today’s taekwondo is less ambidextrous than yesterday’s. “Now it is only the front leg - 80 percent of it is front leg kicking!” he said. “Biomechanically, this is wrong: It should be the whole body, the center of gravity has to move.”He leans backward with his torso, showing how, in this stance, only the front foot can be used to fire short jabs.

While jackhammer push kicks may jam the opponent’s forward motion and rack up points on the body protector, fighting on the back foot is a no-no in virtually any contact sport as it erodes power generation. Moreover, a rear-weighted, backward leaning stance obviates many of taekwondo’s signature spinning kicks.

He acknowledges that, with the Summer Olympics upcoming, there is little that can be done between now and summer 2016. However, he does think that by removing the sensors from the sole of the foot, front-leg push-kicks will become less prevalent. He also plans, over the next 11 months, to canvas opinion from across the global taekwondo family. “I want to listen rather than speak,” he said. Post-Rio, he plans significant changes. “I want it to be more like a martial sport,” he said.

Physically, Jung is a walking advertisement for taekwondo.

He plays golf and badminton. He runs, lifts weights, conditions his core and is constantly stretching: “Whenever I sit on the floor I stretch out; I think that as you get older, you need to practice flexibility.” He practices taekwondo two to three mornings a week, and as a professor at Korea National Sports University in southern Seoul, kicks the paddle, shield and heavy bag, demonstrating to his students the full technical repertoire that made him a repeat champion. “I tell my students, ‘Until I die, if I can walk, I will still be kicking.”

Although Korea is the birthplace of taekwondo, he says the nation’s frenetic modern culture explains why so many practitioners quit in their 30s or 40s. “Because of social factors like job and family and because after work, you have to go out eating and drinking,” he said. “People in their 60s recognize that exercise is very important and then they start, but then it may be too late.”

An issue that exercises his mind is how to create taekwondo stars with brand visibility and media attraction outside the dojang or competition arena. He thinks the sports’ governing body needs to do more to honor current and former stars. “Before an opening ceremony they have to introduce the best players, and the former best players,” he said. “The WTF has to make a story around our players for the media.”

Star athletes inspire people to sign up at a taekwondo class and strap on a white belt he said, citing Turkish Olympic gold medalist Servet “The Cheetah” Tazegul as the kind of spinning, leaping, high-kicking fighter who can capture the public imagination.

This thought brings Jung back to the vexed technical nature of the sport at present. “The WTF has to create a scenario where athletes will use the best techniques,” he said. “With a little bit more powerful technique, rather than touch contact, spectators would like the game.”

He makes a final invitation. “Many coaches and athletes have good ideas to develop taekwondo,” he said. “If you have an idea, call me or send me a message, I want to listen, not talk.”

So watch this space. With your input, post-Rio taekwondo is going to change.