SOFIA, Bulgaria (Oct. 20, 2019) – The third and final day of the Sofia 2019 World Taekwondo Grand Prix ended with golds going to China – which has had an excellent tournament - and Jordan as the Women’s -49kg and Men’s -80kg categories were contested.

The crowd at the Exhibition Forum Event Center of Sofia’s Hotel Marinela were treated to not only consistently superb matches, but also witnessed the return to peak form of one of the game’s greatest players.

In the final of the category, Korea’s 2016 Rio gold medalist So-hui Kim took on China’s Beijing 2008 and London 2012 gold medalist Jingyu “Superkicker” Wu of China. Wu is in the midst of the sport’s biggest-ever comeback, following a two-year layoff during which she gave birth to a daughter.

Wu opened at lightning speed, appearing to surprise Kim and scoring immediately with one, then two body kicks. Kim returned fire with her own kick from open play, grabbing two point of her own with a skipping side kick that flew across the mats. Round 1 ended 4-2 to Wu.

In the second, Kim attacked, trying to force Wu off the mats, but Wu stood her ground and stayed cool in the clinch. Wu side kicked and flicked out face kicks, then – as Kim attacked – executed a circular back step combined with a body kick. This was real technical mastery, but Kim also landed, and Round 2 ended 6-4 to Wu.

With just a two-point difference, either athlete could win it in Round 3 . Wu stabbed in another side kick in to go to eight then to 10. Kim now had to advance. Wu backpedaled and coolly bided her time before landing a perfect face kick to Kim - then another! Wu’s radar was now locked on and the crowd started cheering. In the final seconds, Kim landed again, but the match ended 24-8 to Wu.

Make no mistake: A taekwondo legend has returned.

Bronzes were won by Tijana Bogdanovic of Serbia and China’s Yuntao Wenren, who had been dispatched by team mate Wu with a leg injury in the semi-final. 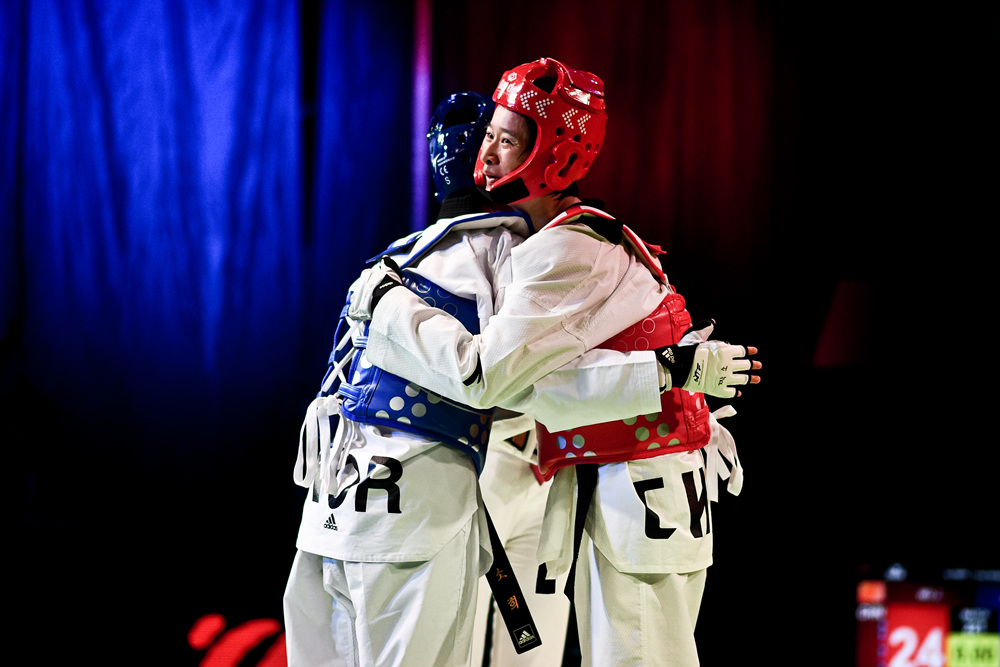 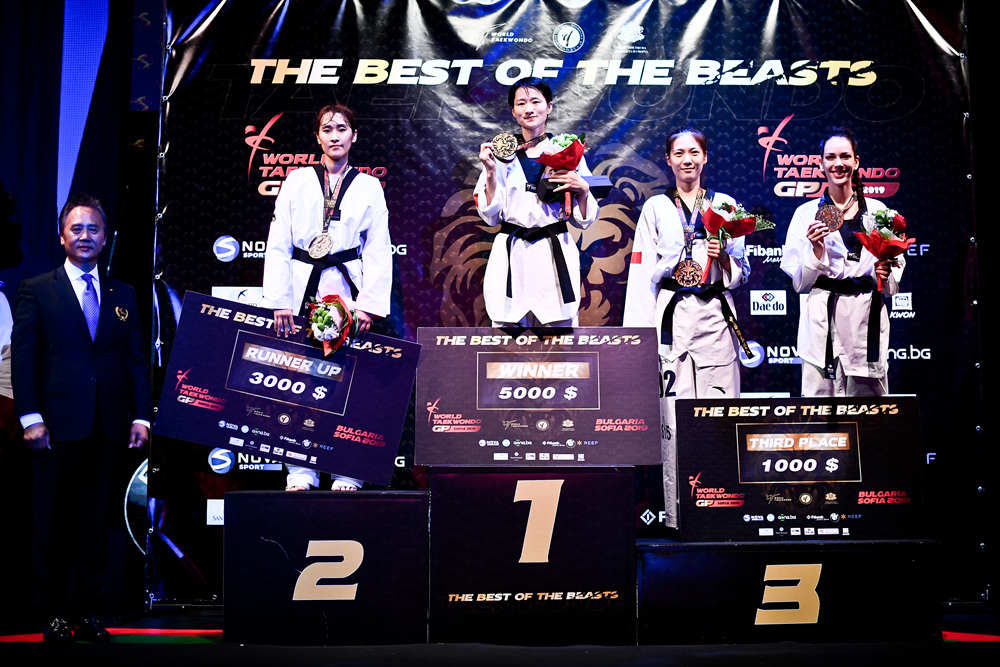 This would prove a particularly interesting category. With key fighters in the division – Milad Beigi Harchegani of Azerbaijan, Cheick Sallah Cisse of Cote d’Ivoire and Maksim Khramtcov of Russia – skipping Sofia, the field was wide open. The final pitted Jordan’s Saleh El-Sharabaty against Egypt’s Seif Eissa.

Round 1 saw a swift start by both men as they fought to dominate center mats. Eissa unleashed his long front leg, alarming the Jordanian who employed some nifty footwork, and countered with a side kick and back kick, before the Egyptian landed a monster punch for the first point.  Round 1 ended 1-0 to Eissa.

In the second, the Jordanian shifted up a gear, landing two head kicks, and suddenly Eissa was in trouble. But he countered with a high round kick, for 5-6.  The Jordanian nearly planted a back kick to Eissa’s face that drew gasps from the crowd, and Round 2 ended 6-5 to El-Sharabaty.

In the third, the Egyptian landed first, going up to eight with a spin kick; another heavy body shot and Eissa was on 10. El-Sharabaty now needed to work; he ducked under the arcing leg of the Egyptian and continued plying his side kick. The Jordanian bought his score up to nine with a kick in the clinch and then a cobra-like round kick to the head, and12 points rang up on the board. El-Sharabaty exulted for a split-second, but battle continued as the seconds counted down. It ended 12-10 to the Jordanian, who dropped to his knees and raised his fists, celebrating his first Grand Prix gold.

Icaro Miguel Martins Soares of Brazil and Moises Hernandez of Dominica took home with the bronzes after hard-fought semis, and so ended the Sofia Grand Prix. Taekwondo’s elite will next clash at the Grand Prix Final in Moscow in December. Join us there! 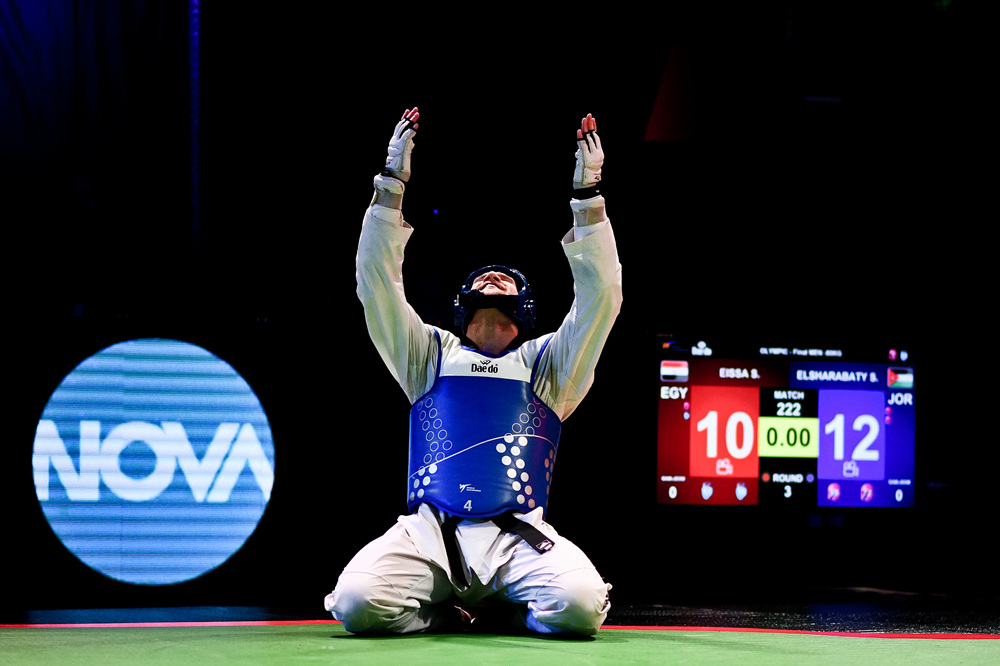 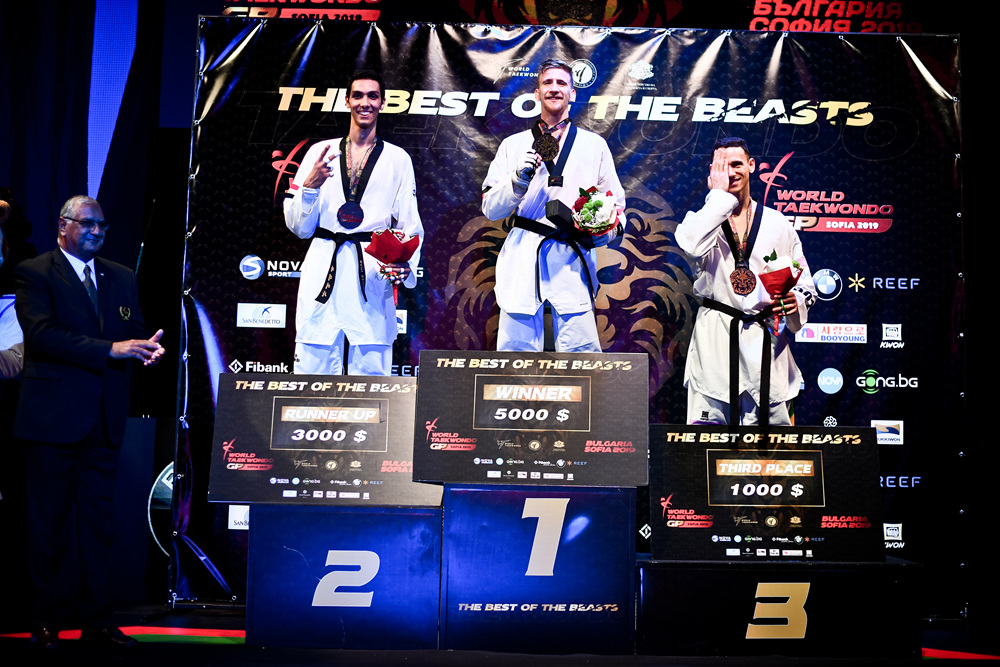