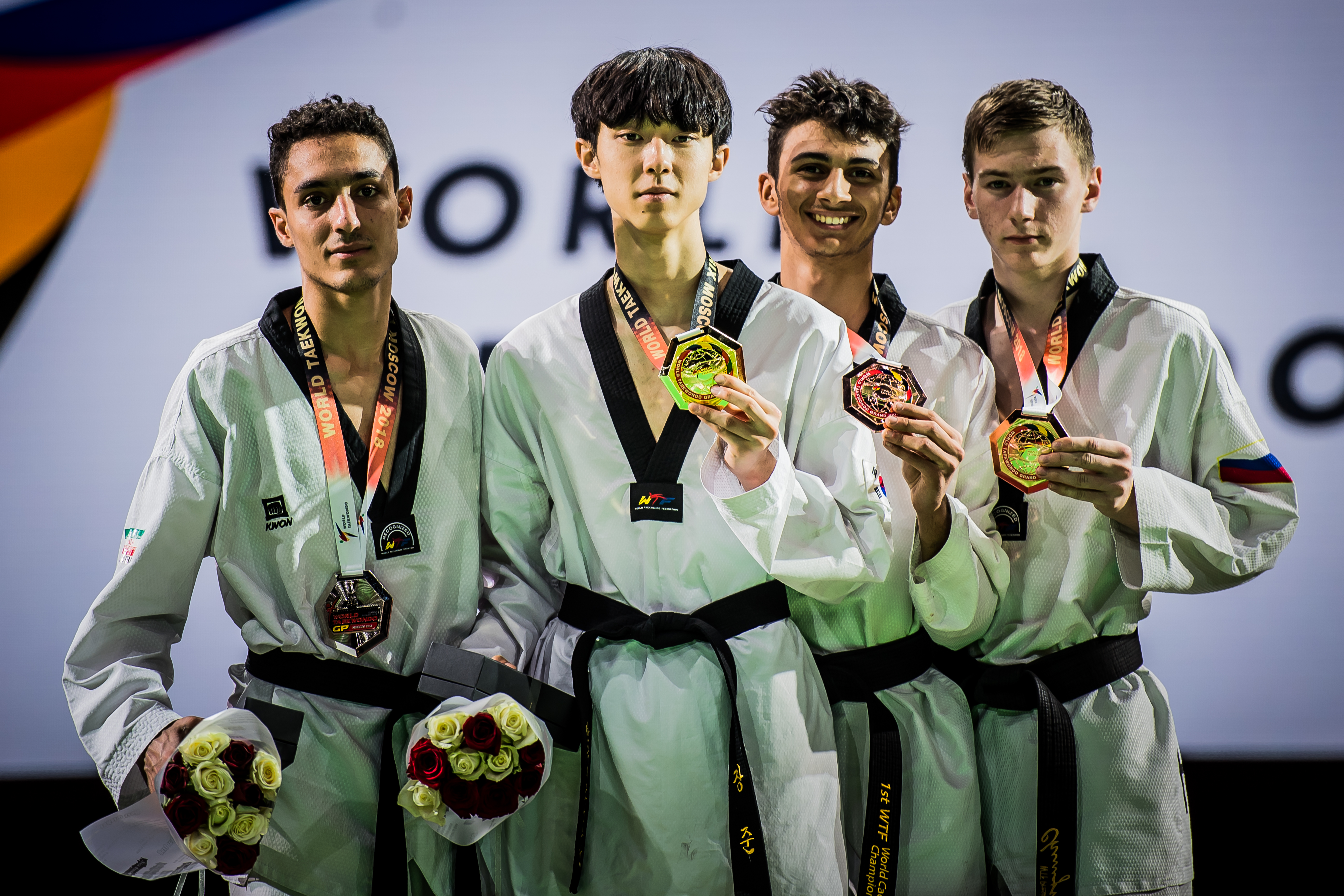 The silvers were taken by Croatia, Iran and Turkey, while bronzes were won by Russia, Turkey, Italy, Russia (again), China and Serbia.

Moscow is the second edition of the elite-level, invitational Grand Prix series, following the season opener in Rome, Italy.

In the first semifinal of the category, European Champion Tatiana Kudashova of Russia took on World Champion and Grand Slam gold medalist Irem Yaman of Turkey. The first round was slow, with the referee calling for action. In the second, the Russian scored to the head for a three-point lead, and suddenly it was game on. Yaman attacked with head kicks; Russian scored again to the body; then the Turk finally landed an arching kick to the head. The round ended 7-3 to Kudashova. In the third, Yaman scored with a cut kick to the body, but was penalized for pushing on the edge of the mats. Kudashova ducked under Yaman’s high kicks – but then she connected to Kudashova’s head. Score: 10-10. Almost as soon as the round started, Yaman struck decisively with a cut kick for the win and a place in the finals. 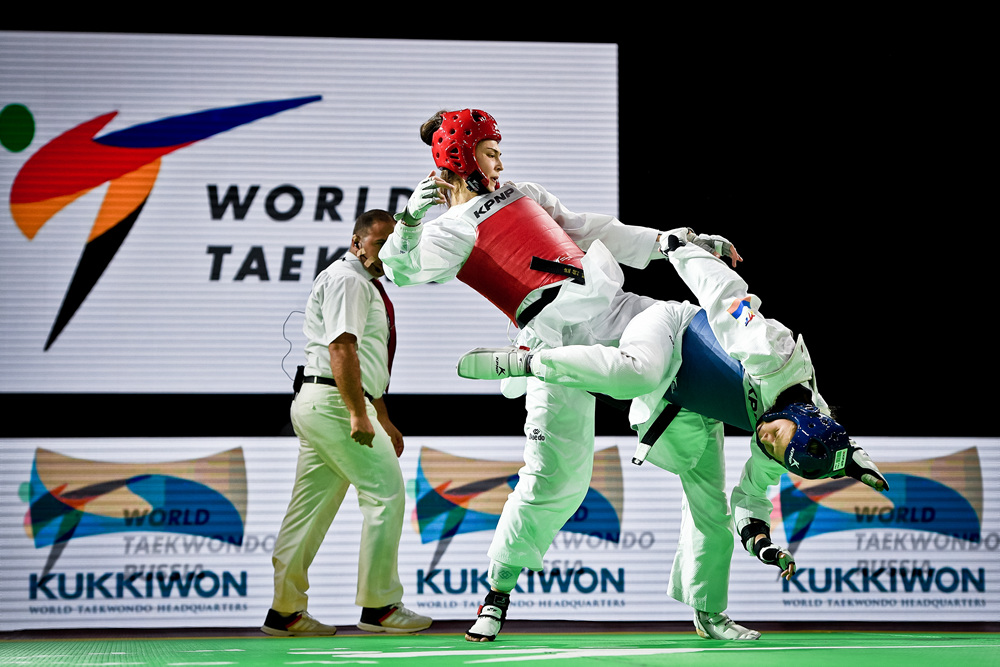 In the second semi, Bruna Vuletic of Croatia did battle with Hatice Kubra Ilgun of Turkey. The Croatian scored first with a perfectly controlled double kick that flicked past then back to the body but the Turk struck back. The round ended 2-2. Vuletic then landed the ax to Ilgun’s head, but fell: score 5-3. The bout heated up with multiple clean technique exchanges from both players and virtually no clinchwork. The round ended 8-8. The Croat drew ahead to 10 points with a body kick, then tried more head kicks. In the last 30 seconds Ilgun attacked furiously but the Croat was not giving anything away and scored yet again, taking the match 14-8.

The final was Turkey’s Yaman versus Croatia’s Vuletic. It started slowly with both fighting from conservative, side-on stances; the referee called repeatedly for them to fight. Round 1 ended 0-0. In the second, both fighters scored early to the body; clearly the two were evenly matched. The round ended 2-2. Things heated up in the second with both firing and landing head kicks, but with Yaman ahead, 6-5. Then she landed an audible cut kick under the Croat’s guard, going 8-5 up. She had found the range and mercilessly went 10-5 up. In the last 20 second the Croat launched a close-in charge, but Yaman’s cut kick landed again and it was all over: Gold, with a score of 12-5 to the Turk.

The first semi in the category put Italy’s Vito Dell’Aquila, a rising star, in against Armin Hadipour Seighalani of Iran. The Italian lunged forward immediately, seeking to establish dominance, but the Iranian landed first to the body. The Dell’Aquila counter attacked immediately and scored; Round 1 ended 2-2. The second saw the Iranian astutely place himself at the center of the mats, once gain the Iranian drew ahead. The Italian counter-attacked leading to an edge-of-mats flurry. Neither man would let the other draw ahead, and the round ended: 8-8. The third saw intense kick exchanges, and a fall from the Italian before the Iranian drew ahead 11-10. Some heated clinching and another fall from Dell’Aquilla saw the Iranian extend his lead 15-11. Yet again the Italian clawed back the points, raising his score to 13. Armin Hadipour Seighalani was mixing side kicks with head kicks, while the Italian struck back with cut kicks. Both were attacking with real venom, and for the third time, the rounded ended even - 18-18. In golden point, both opened fire but it was the Iranian who scored first, putting him into the final. 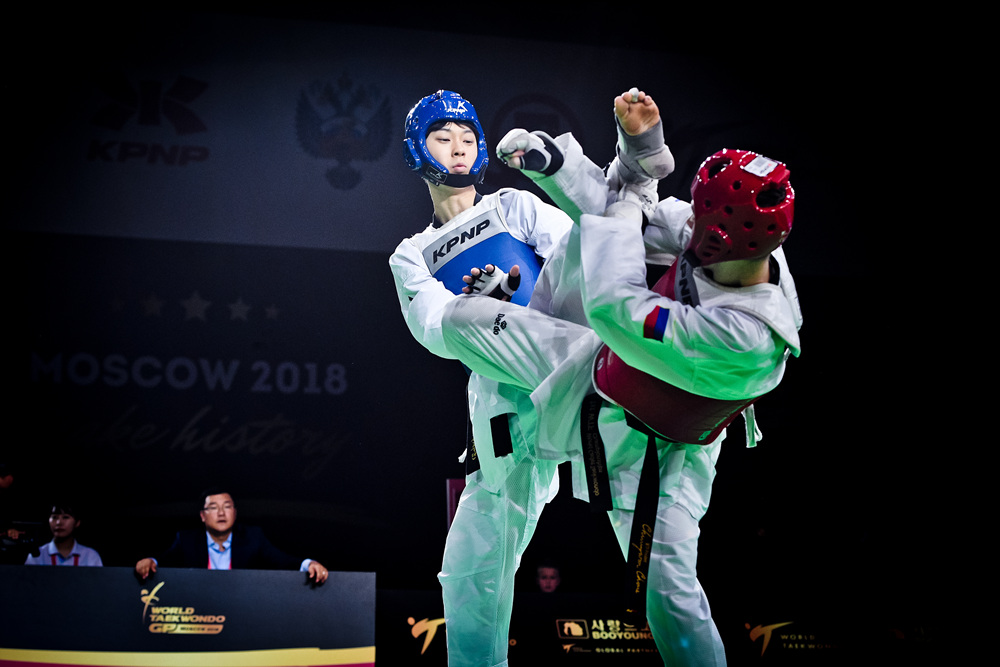 The second semi pitted Korea’s Jang Jun – another rising star who is still in high school – against Andrei Kanaev of Team Russia. The game started with technical sparring as they felt each other out. Jang was penalized for pushing, but landed kick-punch combinations to finish the round 3-1 up. In the second, the Korean methodically extended his lead, making excellent use of punches, smart combinations and close-range head kicks - all while demonstrating excellent ring control. The second ended 13-3 to Jang. The Russia now had to attack, but his moves looked wild as the Korean used circular footwork and kicks counter, all delivered economical effort. The match ended 24-9 to the Korean wunderkind.

Hadipour Seighalani was unable to appear due to a knee injury suffered in his first bout - leaving Jang with gold. It was an imperfect end – but the young Korean is surely a face to watch.

China’s Rio 2016 gold medalist Shuyin Zheng took on Rome Grand Prix gold medalist Aleksandra Kowalczuk of Poland in the first semi-final of the women’s heavyweights. Despite significant work (and contact) from both fighters, the scoreboard remained vacant at the end of Round 1. In the second, Zheng was forced out of the ring putting the Pole one point up - then Kowalczuk’s cut kick slashed through the taller Chinese fighter’s guard, and she felled her with a side kick. The round ended 4-0 to Kowalczuk. In the third, she scored again to the body, before Zheng landed a head kick, taking the board to 3-6. With just over 30 seconds left, Zheng pressured the Pole back, trying desperately to land her high kick, but Zheng’s towering height worked against her as the Pole stayed in tight, preventing her from extending her leg. It ended 7-4 and a Polish victory, thanks to some very smart play by Kowalczuk. 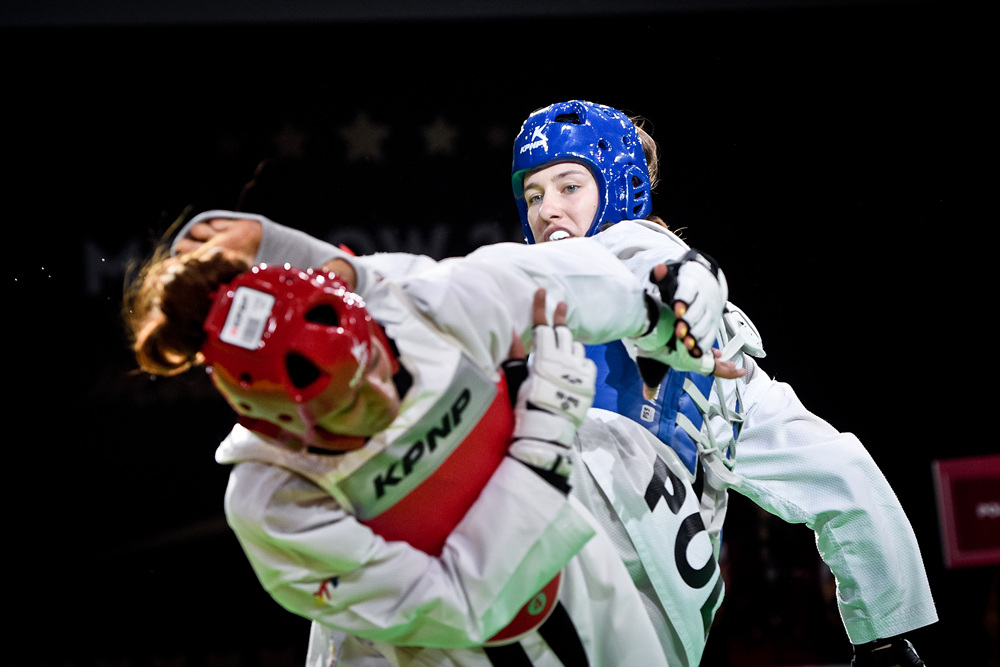 In the second semi, Turkey’s European Champion Nafia Kus did battle with London 2012 gold medalist and current World Champion Milica Mandic of Serbia. Both looked determined, unleashing venomous kicks and shrieking kiaps. Kus drew first blood with a body kick; the round ended 2-0 to her. In the second, Mandic stalked the Turk but did not connect. Kus was penalized for holding; the round ended 2-1. In the third, Mandic equalized the score with a punch - going 2-2 - but in the very last second, Kus finished the job by scoring with a body kick, winning the match 4-2.

The final saw Poland’s Kowalczuk take on Turkey’s Kus. It was immediate action, with Kus stabbing forward and scoring two points with a side kick in the opening seconds The Pole returned fire but Kus leaned out of the range - and scored to the body again. Round 1 ended 4-0 to The Amazon. In the second, the Pole found the range with a body kick and the round 2 ended 4-2 to Kus. In the third The Amazon was penalized for holding, taking the score to 3-4. Now Kowalczuk showed her quality, drawing ahead, 5-4, then 7-4, pressing her attack with a barrage of kicks that drew roars from the crowd s the board rose to 9-4. Kus, re-energized, launched a blitz of attacks as the round counted down, but despite her last-minute efforts, the match ended 11-9 and a gold for Kowalczuk.